Balinese Painting for the (Not So) Artistically Inclined (Vlog Ep. 22) 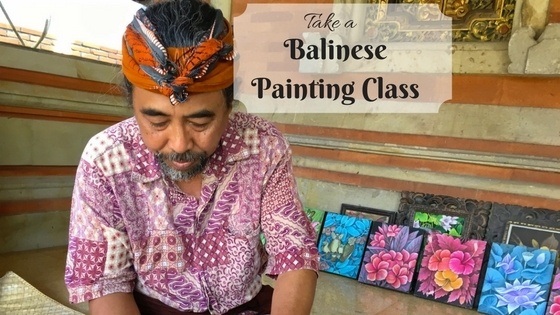 A painter I am not. But I didn’t let that stop me from taking a Balinese painting class with a local (and well-known) artist in Ubud.

A painter I am not. (This bears repeating). Of the four artistic modalities, I excel at the other three (drama, music, dancing). But the visual arts has always escaped me. I’m simply unable to conjure up something from the depths of my imagination and visually bring it to life. Growing up, I envied doodlers. I couldn’t even do that.

A few years ago I explained this to some friends of mine in Australia.

“Nonsense!” They said, and whipped out some play dough. “Make something – whatever comes to mind. Let your creative genius shine.” they said.

As we all sat there with our chunks of play dough, I focused on my blob. I wanted to allow the sculpture within my blob to shine. So I moulded my blob into another blob. Twenty minutes later I presented my creation.

My friends had been busy making little flowers, and people, and balls and squares. Their eyes widened when they saw my blob. Too embarrassed to admit that I was right (I’m a talentless hack when it comes to visual arts), they said “well….it’s….it….it just needs a little….” and proceeded to try to make my blob into something that was at least somewhat aesthetically appealing. Not long after they gave up, and we never spoke of it again.

So why on earth would I take a Balinese painting class, you might ask?

Ubud is the artistic and cultural centre of Bali, and as such, I wanted to immerse myself in all that Ubud has to offer. Tourism to Bali actually started back in the 1930’s when a string of famous artists and performers started arriving. People such as Walter Spies, Willem Hofker, Rudolf Bonner, Charlie Chaplin, Noel Coward, Barbara Hutton, H.G. Wells, Vicki Baum, and Arie Smit all helped to define Bali as a place of artistic pursuit. Given this long-standing history of Bali inspiring great artists, I thought Bali could inspire me too.

Secondly, you may recall from my experience visiting Tsukiji Fish Market in Tokyo that I’m a fan of using local tour guides. So when I arrived in Bali, I browsed the many experiences I could do on Withlocals, and for some inexplicable reason, this Balinese painting class jumped out at me.

I’ve long known about Withlocals, and I was delighted when they agreed to offer me a couple of tours for free. Although I appreciated the savings, the truth is it’s negligible – these kinds of tours with local folk are generally very inexpensive to begin with. This half-day Balinese painting class, for example, costs 30 Euros and includes all the supplies to produce (and keep) my own painting, as well as lunch.

Putu could not have been a more genial and supportive teacher. As an icebreaker, I asked him some questions about his family compound, where we were seated.

“How many children do you have?”

“Five, but my last child is the most special to me,” he replied. This surprised me; most parents don’t express such blatant favouritism. When I enquired further, he delved into a long story of how his last son (who is four years old, and was born to he and his wife long after you’d surmise their child-bearing years had ended) was actually a reincarnation of his father, who had died very shorty before their conception. I was enraptured, and by the end I was a believer too, as we watched his son laugh and run around the compound like he built the place (as Putu’s father had done).

We discussed how earning a living as an artist in Bali has changed over the years. Putu is less busy creating art to sell to tourists and locals (something that was big business in the 80’s and 90’s), and much busier creating art and carvings and sculptures for local religious ceremonies of all kinds.

Somehow in relating all of this, he made me feel much better about my own ability – or lack thereof – to be artistic. He made me feel like the very act of breathing was art.

What attracted me to this Balinese painting class was the idea that there is an entire philosophy behind the act, and I wanted to learn more about it.

Watch the video to see Putu describe the four stages of creating art in the Balinese way, but here they are in short:

Meet Putu in this fun video, and watch me create a not-so-wretched piece of art in the Balinese painting tradition!

UBUD Market: How to Negotiate, with Video

6 thoughts on “Balinese Painting for the (Not So) Artistically Inclined (Vlog Ep. 22)”