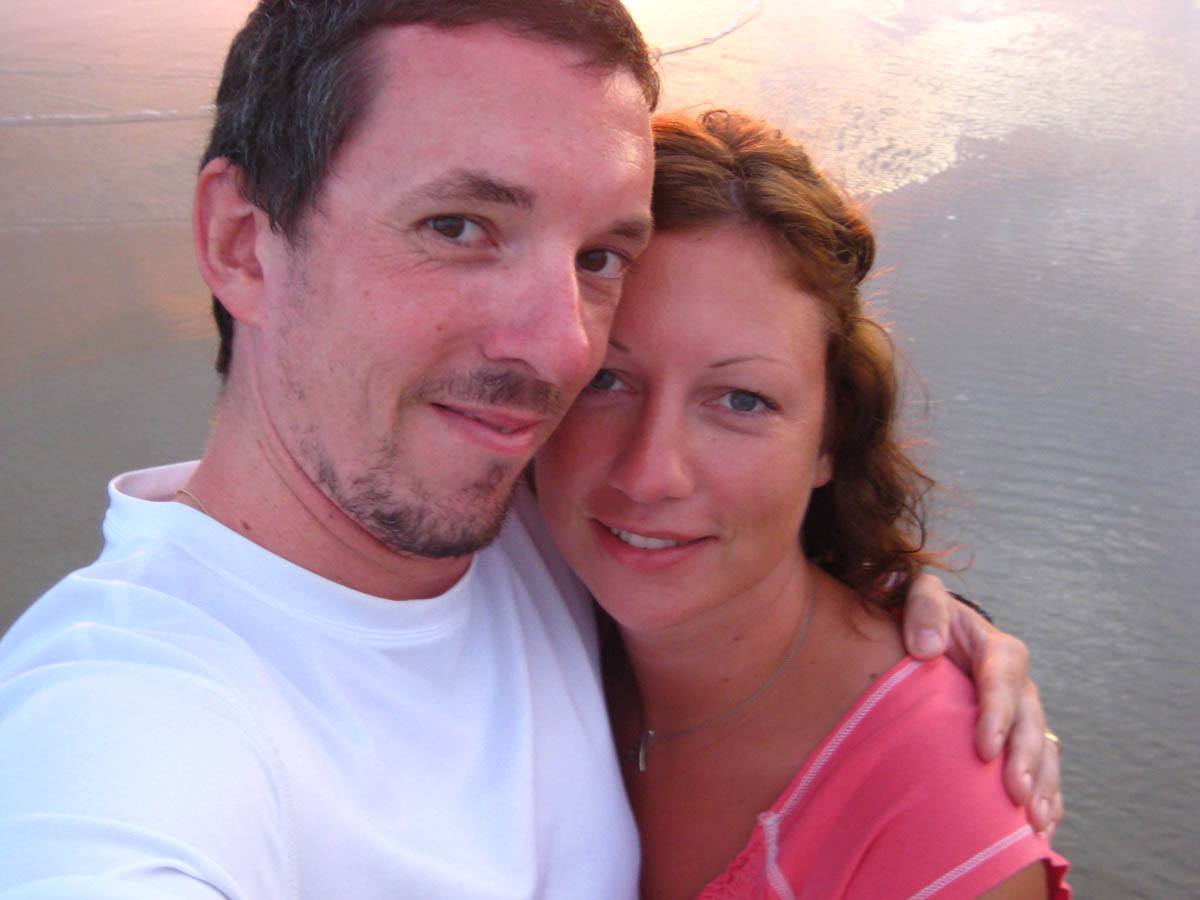 After Dalene and Pete suffered a number of personal tragedies in 2007, they realized that life was way too short to be stuck in unfulfilling careers and in a too-large house filled with *stuff*.  Hecktic Travels was born when they quit their jobs, sold everything, and have been traveling since 2009.  They started out with a tour around South America, which saw them jumping off of mountains in Argentina, kayaking in Chilean Patagonia, and living next to an exploding volcano in Baños Ecuador.

Dalene shares the story of their first week living under high alert for evacuation while the Tungurahua volcano (known locally as “Mama T”) saw its highest level of activity since 1999.  They were several weeks into a multi-month stay in the city of Baños de Agua Santa, doing volunteer work at La Biblioteca Interactiva (La BIB) and living in a shared apartment just above the library.  They were right at the base of the volcano and only 5 miles from the crater. Please enjoy this dramatic week-in-the-life of Dalene and Pete!

Nora’s Note: I’ve seen my own share of natural disasters, and I even evacuated Bali due to an erupting volcano! If you’re feeling brave, click here.

9:00am –  Mama T began to blow.  Windows rattled furiously, doors shook.  Karl, our volunteer co-ordinator, stopped by to drop off breathing masks and fill us in on what he knew.  Yes, Mama T rumbles a few times a year, but no, she is not usually this loud.  And she rarely rumbles in the morning.

11:00am – Karl, myself and another volunteer decided to take a walk almost an hour out of town for a closer look while Pete was stuck in a meeting with the foundation.  Some shops were being boarded up and locals looked at us as if to say: gringos estupidos!  We got to our destination but it was too cloudy to see anything.  The strength of Mama’s booms were felt full force though; they rattled our bodies through to our shoes.  Hadn’t decided yet whether to be thrilled or scared.

12:30pm – On our way back, we stopped to watch announcements made on a TV in a shop window.  The town was on high alert for evacuation, and volcanologists were seeing the highest activity in Mama since the town was evacuated for three months in 1999.

2:00pm – I logged on to send an email home and quell any panic with family.  Too late! They had already heard about it on CNN as airports had been closed due to the ash.  I promised to check in regularly.  Started packing.  Confirmed with friends who live in the “safe zone” that they would have a bed for us should we be evacuated.

10:00pm – We nervously sat with another volunteer at our apartment window and stared at the large plume of ash that got bigger with each boom.  Sleep seemed like a remote possibility that night.

2:30am – There were massive, window shaking booms every few minutes, but we finally laid down to try and sleep.

4:00am – I rose from bed in a complete panic as one particular boom caused me to lose my breath in my sleep.  I bolted out of bed and headed straight to the window.  Several eerie minutes of calm followed, and I saw locals that were heading out of town, their vehicles piled high with belongings and family members.  There were also three horses ambling up our street slowly and nonchalantly, stopping to eat grass off the boulevard as vehicles drove past.  Odd.

10:00am – We were both fully awake, after a few hours of relatively undisturbed sleep.  We debated leaving town as I had become very nervous, but Pete was anxious to stay.  Mama was only rumbling every fifteen minutes instead of every few.  We decided to stay.  Pete headed off to another meeting.

12:00pm – Out of groceries, I started to walk into town for lunch, but as soon as I stepped outside, the wind picked up and a cloud of volcanic ash hit me in the face.  My throat was immediately sore.  I went back inside and scraped something together to eat.

1:00pm – Yesi, one of the Ecuadorian employees of La BIB stopped by, wearing her breathing mask.  She was quite panicked; she asked repeatedly if we knew the evacuation route and encouraged us to be ready to go if necessary.

2:30pm – Eerie calm.  We allowed ourselves to unpack a little and settled back in.

3:00pm – Emergency volunteer meeting to get the latest information and talk about the days events.  One American volunteer was severely panicking; there seemed to be no way to calm her down.  A little freaked out myself, I repacked again.

7:00pm – Another local volunteer who had a vehicle offered to take us out of town to a viewing point.  While our visibility was still limited by the clouds, the veil around the crater became spectacularly pink with each blow.  When there were small breaks, we could see and hear large lava rocks blown into the air and then roll down Mama’s slopes.  Damn, we wished we knew the best camera setting to take better pictures.  Somehow, it made me feel calmer to actually see Mama fully in action.

3:00pm – It was business as usual at La BIB and we opened the doors to kids attending the after school program.  I introduced a new game that I had been working on for a couple of weeks – Spanish Pictionary!  It was a huge hit with the kids and helped to take their mind off of Mama’s constant noise.  The panicked American volunteer didn’t show up, she had left town.

5:00pm – We practiced our emergency evacuation plan with the kids.  Walked 30 minutes out of town to the designated “safe zone”.  Had great, unobstructed views of the crater, but no camera with us – d’oh!  Some of the kids screamed and hugged our waists with each loud explosion.

9:00am – Breakfast with other volunteers who commented on the huge shakers in the middle of the night – somehow we slept through it?  Could we possibly have gotten used to it?

11:00am – Discovered that Mama has a website with a daily diary of her activity.  All levels of activity were increasing.  Hmmm.

3:00pm – “Kids Day” Party at La BIB!  Had debated canceling it, but were sure glad we didn’t.  The party was a huge hit with many kids and parents in attendance.  Three legged races, musical chairs, potato sack races.  But just when we thought everyone had forgotten about the smoldering volcano, Mama reminded us she was there.

10:30am – Mama had fooled us into thinking it was over with a relatively quiet night, but then she started up again.  A small earthquake shook our bed while I sat updating our blog.

7:00pm – We piled back into the other volunteer’s truck and drove up to the top of a hill in front of the volcano, just above the cloud line.  Incredible!  Kicked ourselves for still not knowing how to use our camera properly in this situation.

2:00pm – Another volunteer meeting.  We learned about the Mayor’s plans to have a full mock evacuation the following day.   Everyone was obliged to follow, except for gringo’s.  Que ridiculoso!  Why not test the alarms when the volcano is inactive?  What if something REALLY happened in the midst of the evacuation?  Why weren’t we supposed to participate – if it ended up being a real evacuation instead of practice, we would be left behind? Rumor had it that many of the locals wouldn’t go – they were worried about being locked out and having their homes looted by the army (which happened during the 1999 evacuation).  We decided as a group to stay put.

There was also news that the provincial leader was ramping up for evacuation; beds and other supplies were being set up at shelters in the safe zone.  He was apparently at odds with the Mayor over whether or not to evacuate.  Mayor was head of the evacuation committee, but also very pro-tourism and didn’t want to disturb the inflow of tourists – an evacuation would be bad for business.  We shook our head at the politics being played out while lives were possibly at stake.

8:30pm – Some seriously loud explosions again.  It was definitely something we had gotten used to; we didn’t even bat an eye anymore.  I was sure that I would probably even miss Mama when she calmed down again.

11:36am – Evacuation sirens rang out.  We watched from our window as school children ran through the streets.  It’s obvious that the whole town didn’t participate.  Within an hour, everyone was filing back into town and to their homes.  The Mayor called it a success.

5:00pm – Survived one exciting week with Mama, time to celebrate.  Karaoke, anyone?

Dalene & Pete stuck it out in Baños and are now happy to have had this exciting experience. In emailing with Dalene afterwards, she said the following of what it was like for the kids who have grown up in Baños: “One of the most bizarre things was when we would sit and draw pictures with the kids, they would draw their family standing next to a booming volcano…just the same as we would have drawn our family standing next to a spruce tree. Such amazingly different perspectives.” That’s part of the fun of immersive travel – to see these different perspectives in action!

Dalene & Pete are currently sitting comfortably in Roatán, Honduras for an extended house sitting job, where they will be volunteering their time with the SOL Foundation and Sandy Bay Alternative School. Next up: who knows?  They are without plans, and waiting for opportunities to open up to them.  They haven’t been led wrong so far.

Learn about their current adventures on their website: www.hecktictravels.com.

**Pete & Dalene have since accrued years of house-sitting experience, saving them tens of thousands of dollars on accommodation around the world. They teach you how to do it here: How to Become a House-Sitter and See the World**