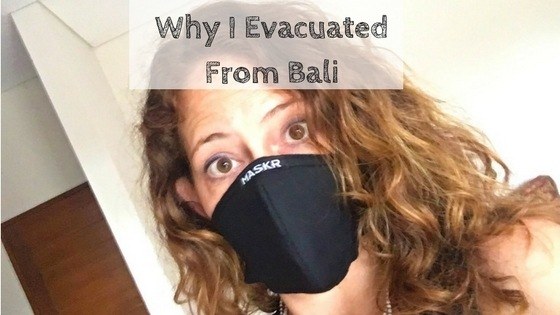 “So…how do you know Tony, again?” asked my hosts – and perfect strangers – John and Layla, who had generously given me a place to stay in their Jakarta home when I evacuated from Bali.

“Well….Tony [John’s best friend, who was out of town at the moment and had called on John for a favour to put me up] has a sister in Canada, Lesley. Lesley is married to Ian. Ian has a step-child, Maureen, from a previous marriage. She’s my friend.”

“So…you’re not related in any way.”

“Nope.” There were probably fewer degrees of separation between us and Kevin Bacon. This game of six degrees took a while for us all to wrap our heads around, but thankfully John and Layla took it all in stride and were very gracious interim hosts, until Tony and his family returned (Tony also being a perfect stranger but with one less degree of separation from me; at least he knew who all these people were).

Because after all, I was a refugee of sorts, evacuated from Bali.

I shot this video while taking a break from packing my bags after deciding it was time I evacuated from Bali. It was a tough decision, as you’ll see. Click here to watch on YouTube.

Why I Evacuated From Bali

A week after I returned to Bali from my Hong Kong trip, I evacuated. I didn’t have to. And I certainly didn’t want to. So here’s why I did.

Mount Agung is a huge volcano (“Agung” in Balinese means “big one”) that started going off the seismic charts the week I returned to Bali. Every day the caution levels increased, as did the number of people in the 12km radius who needed to be evacuated from their homes and relocated to shelters and community centres – over 70,000 in total. Although nobody could say for sure, it seemed to be not a matter of if the volcano would blow, but when.

I wasn’t in immediate life-threatening danger in Ubud 30km away, but there was sure to be ash fall, potentially of a significant nature. A friend of a friend who survived Mount Agung’s last eruption in 1963 (killing over 1,000 people) said over a foot of ash fell in Ubud.

Initially I wasn’t concerned about ash fall, until learned there could be over a foot of it, at which point I started researching. With the pervasiveness of smoke, volcanic ash gets everywhere, and is comprised of tiny jagged pieces of glass (pulverized lava), laced with sulphur and cyanide. All in all, it’s a toxic cocktail that is hard on both lungs and electronics. It grounds airplanes (for up to weeks at a time), and I had no idea what it would do to my computer and phone, but I wasn’t eager to find out.

An ash fall event requires you to stay indoors in a tightly sealed dwelling (virtually non-existent in Bali) for a few days. You get advance notice of minutes to hours from the moment of eruption to the beginning of the ash fall. So although I was relatively prepared in my (somewhat-but-not-really airtight) room with food and water and an air mask, there was no guarantee I’d be close enough to my room to get there when it started.

Then there would be the cleanup phase, which would surely stir the ash up again. If we would be lucky enough to get rain it would take the ash out of the air, but would also turn the fallen ash into the equivalent of cement, likely collapsing roofs.

All in all, it was not a pretty picture, and I wasn’t interested in learning through experience what the long-term health effects of surviving an ash fall were, much less putting my electronics at risk of being destroyed, and possibly missing my onward flights from Bali to India in a few weeks.

All this is to say nothing of the hundreds of daily earthquakes and tremors, which did nothing but escalate in the week leading up to when I evacuated from Bali. Although I didn’t fear the earthquakes per se, the constant tremors left me perpetually nauseous and off-centre.

Why Nobody Else I Knew Evacuated From Bali

Much as the picture above seems pretty grim, I wasn’t part of a mass exodus from the island. In fact, in Ubud, it was business as usual.

The locals were mildly concerned, but largely unfazed and I suspect in denial. These are the responses I got from locals:

“We are Balinese. This is our land. It will be what it will be.”

“I gave an offering this morning to Mount Agung. I am praying. It will be okay.”

This last response was of particular concern to me. What to do? How about set yourself up with food and water? Perhaps buy a face mask to filter out ash? Fill up your car/scooter with gas? I dunno….something?

The expats I spoke to were mixed. Some were a bit panicky. Others were resolved.

“We don’t know if the volcano will erupt today, or tomorrow, or months from now. Or maybe never. I can’t uproot my life and be evacuated from Bali and spend all that money based on probabilities and unknowns.”

“The winds were blowing in a different direction in 1963. I think we’ll be fine; the stuff you’re reading is fear-mongering.”

“Nobody else is leaving. The locals don’t seem concerned. I’m taking my lead from them.”

I didn’t speak to many tourists before I evacuated from Bali, but given that they were doing their touristy things, I surmised that they too, were unconcerned. This was in part due to the gargantuan efforts on the part of the Balinese Tourism Department to encourage tourists not to alter their plans. Because Bali derives the majority of its income from tourism, they simply can’t afford to shut down the island – an island with 70,000 refugees just outside of the tourist towns, mind you – based on a prediction that the volcano would blow at some undetermined point in time.

Sitting in Jakarta on Thursday September 28th, two days after I evacuated from Bali, I read this article which shows the Bali Government Tourism Office in an almost desperate ploy to reassure the world that tourism to Bali is safe.

They show copies of letters issued by this office. In one letter, addressed “Dear People of the World”, dated Sept 27th, the director mentions that Mount Agung is 32 km away from Ubud centre (which is the closest heavily-touristed town to the volcano). In another letter issued by the very same office on the very same day, they say Ubud is 51 km away (which is also technically correct if you take the indirect roads. But lava and ash don’t travel via the roads). To me, it reeks of downplaying, because Bali would be terribly hurt economically by a drop in tourism.

On September 29th, despite nothing but increased volcanic activity, the director had the audacity to call for the volcano alert level to be lowered, due to concerns about tourism to Bali over the Christmas holidays.

This seems to me a very dangerous game of tourist-roulette to be playing. Perhaps they’re playing the odds? Or…

I didn’t have to evacuate. But because I had friends of friends (of friends) near Jakarta who were willing to put me up, and because Jakarta was where I had to catch a flight to my next destination, I decided to bail.

I had nothing to prove in staying.

And I was living day to day and moment to moment, wondering if today would be the day, and trying not to be too far from my room just in case.

I was nauseous from the constant tremors.

I was nervous about keeping my electronics protected; a potential loss of thousands of dollars if they stopped working, much less a significant disruption in my work.

And with each day the volcano didn’t blow, it increased my chances of missing my onward trip to India with an eruption close to my departure date.

The stress of it all, along with the potential downsides of staying, made leaving a logical – but still difficult – decision.

I’ve survived a few natural disasters already in the last 11 years of world travel. I’d rather not add another to the mix.

It’s also worth noting that Bali has done everything they can to ensure tourists will be okay if/when the volcano erupts. Ferries are waiting to evacuate tourists to neighbouring islands to fly out. Bali has assured the world they will extend visas and provide accommodation should tourists be stranded on Bali.

The volcano remains on the highest alert conditions, and could erupt at any minute. Bali continues to be in a state of emergency. This could honestly go on for months, or even years.

I had an email conversation with an expat who continues to remain in Ubud. He couldn’t understand why I left, so I explained my understanding of the ash fall from 1963 (heck – ash fell as far away as Jakarta!!) and the general hazards of ash. He had no idea.

I wonder just how many other people have no idea….for better or worse.

Will I return to Bali? You betcha. In the coming weeks, please enjoy a series of articles and vlogs about my experiences there.

I cut short quite a few plans when I evacuated from Bali. I have unfinished business.

In the meantime, I pray for the people and the land of Bali, that they are safe at the foot of this big and powerful volcano.