A Month in the Jungle, Part 3: Jungle Animals (For Better and Worse) 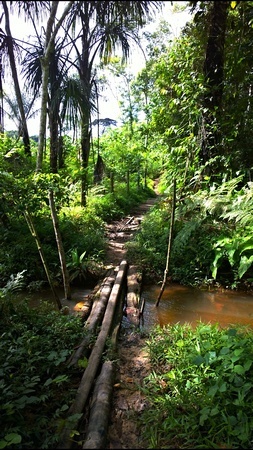 Jungle Journal Excerpt: I’m using a tiny mirror 2×3” to inspect a particularly bothersome pimple on my face. Suddenly I realize something is obstructing my view; it’s not a crack in the mirror as I’d unconsciously thought…the crack is moving.

No – it’s a tiny worm-like creature wending its way across the image of my face. The kind of innocuous looking worm that I wouldn’t have given a second glance to, save for all those Amazonian jungle documentaries I saw as a child, all those hearsay jungle tales about jungle animals like innocuous looking worms that imperceptibly invade various bodily orifices of intrepid explorers when they’re not paying attention…and do horrible things like lay eggs or cause crippling infections and illness that are forever undiagnosable.

I stare at this wee little worm flexing and writhing on my mirror, before unceremoniously killing it. I’m normally a “live and let live” sort of girl, but after two weeks in the jungle, it (and all its inhabitants) is starting to close in on me.

And I still have two more weeks to go.

The Amazonian jungle is teeming with life, of all kinds. Isn’t it interesting however, that it’s the wee jungle animals that, en masse, can wreak havoc with our sanity.

This jungle-worm (from my journal excerpt above) was far from my first encounter with nature during my month living in Peru’s jungle, and also far from my last. Just the day prior I returned to my tambo (jungle hut) to find I’d been invaded by termites.

At first I thought it was a small trail of ants climbing up my mosquito net. But as I tracked this trail, I discovered it led to a writhing mass of them, constructing a small termite-highway up the leg of my bed.

And another one on the opposite bed leg.

And another on the foundational post of my tambo…and another, and another. They were everywhere.

They’d already started eating two pieces of clothing I had hanging on the wood rafter, and as I followed that particular trail, I found thousands of them all over my luggage. Thank goodness I’d brought a sturdy waterproof duffel to the jungle (and thankfully I’d left it closed), because they’d have made short work of anything else – and all its contents.

I grabbed my bottle of 100% DEET (something I’d been strongly advised to get but that I’d still reluctantly brought and even more reluctantly used until that moment), and sprayed like a crazed woman. I sprayed every termite-empire I could find. The more I sprayed, the more I found. Intricate constructions that, mere hours prior, there wasn’t the slightest hint of.

Soon, my tambo was a war-zone; the termite carnage was horrific. I maniacally used a broom to beat at their highway tunnels along the wooden posts, I beat my luggage, turned it over, and beat it some more. Piles and piles of them lay dead in my tambo. I swept them off every surface and out of every corner.

Then, I stood in the middle of my tiny tambo, not knowing what to do with myself. I felt like the place was still crawling with them, despite having taken care of all I could find. There was just no escape for me; nowhere to sit or lie down that hadn’t been molested by termites. Nowhere to put my stuff that they couldn’t get to.

So I just stood in the middle of my tambo. And breathed.

And then, I swatted.

Although I took people’s warnings and “tall” tales about mosquitoes seriously before I arrived in the jungle, another part of me also thought “Meh. Mosquitoes don’t usually bother me that much. Guess my blood isn’t that sweet to them.”

But in the Amazon jungle, it was a different story.

In a week, I’d accumulated a repertoire of itchy red swollen welts that made for a riotous game of connect the dots. After two weeks, the welts had multiplied alarmingly and many had turned purple; some actually oozed. I applied and reapplied the best skin cream locally available; I even took it to bed with me at night and reapplied under my mosquito net whilst half-asleep to reduce the amount of scratching I’d do mid-sleep.

I had bites in the most unsavoury places; in the crack of my ass (and everywhere else on my ass as well, such that sitting down was a challenge), all over my boobs, and of course on those tricky spots in the middle of my back that I couldn’t reach for love or money (neither to scratch nor to apply cream).

In my travels, I’ve been mauled by spiders, hazed by sand flies, and attacked by centipedes. But enduring a month of ever-accumulating and painfully slowly-healing mosquito bites in the jungle has been one of my biggest tests to date.

Other (Not so Ugly) Jungle Animals

Termites and mosquitoes are just two of a host of flying, buzzing, crawling, jumping, hairy, ugly, spiny, spindly, stinging, biting, and otherwise swat-worthy critters in the jungle that are best avoided. All of this might make you wonder why the hell I – or anybody else – would want to spend a month in the Amazonian jungle.

But even as I penned this article while lying in my hammock, a large troupe of tiny red-brown monkeys encircled my tambo. No more than a foot long (minus their tails which doubled their length), they jumped from tree to tree, pausing regularly to peer curiously at me with their tiny grey faces, bobbing their heads back and forth while squeaking and chirping to their companions in the most charming way.

I saw butterflies of all sizes and colours – some up to a foot in diameter, others bright iridescent blue in colour – flying in, around, and through my open-air tambo (which, if you missed Part 2 of this series, doesn’t have walls). Many regularly landed on me or my colourful sandals, staying for minutes at a time.

Large black and yellow iguanas crossed my path, stopping to look sideways at me, before lumbering on.

And the chorus of frogs at night sounded so ridiculous, all I could do was giggle and shake my head in amazement.

I Am a Guest Here

So in those moments (which were many) when I wanted to throw everything I owned at the swarm of flying whatevers around my head and scream, or other (also frequent) moments of agony where even a calamine bath surely wouldn’t have helped, I had to remind myself: I am but a guest in this jungle environment teeming with life. I’m not native to the area, and thus I’m not impervious (or at least not accustomed) to the teeming wildlife – for better and worse – here. Thus, I’m a pretty hot meal-ticket for those who like to nibble on humans, and an object of curiosity for other creatures.

Despite its (many) challenges, to have lived in the Amazonian jungle for a month has been a life-long dream, and now a realized honour.

If you missed it, check out more of this Month in the Jungle series:

Part 2: What to Expect and Things to Bring

and soon to come:

Part 5: Excerpts From my Jungle Journal

15 thoughts on “A Month in the Jungle, Part 3: Jungle Animals (For Better and Worse)”