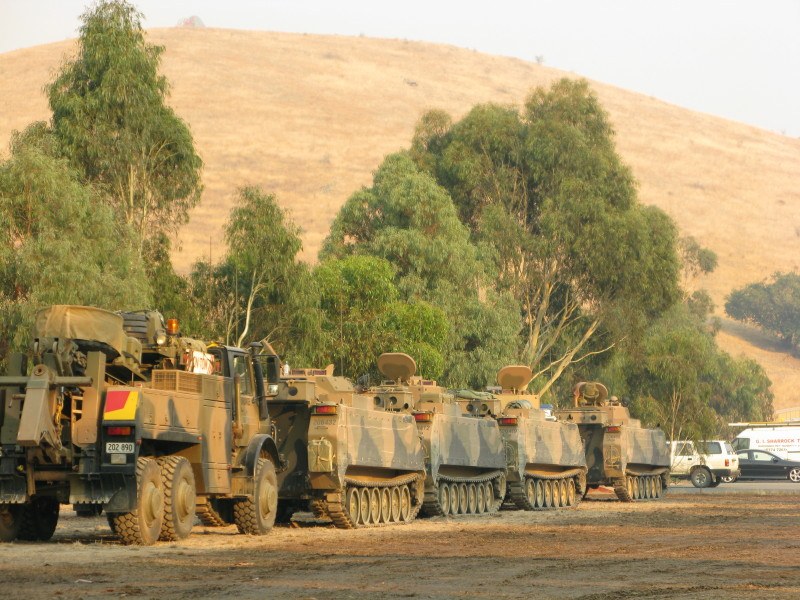 In addition to the hundreds of pumper trucks coming in and out of the Alexandra staging area, armoured personnel carriers are now part of the flotilla. These guys are serious.
This post is part of my Victoria Bush Fire Diary and was originally published in 2009. It has since been updated for accuracy of links and content.

Apparently we are not the only ones living out of our car…we pile our belongings into the car this morning only to meet the stench of death. We had seen signs of a critter in the gnaw-marks in our food items stored in the car, but we figured our small companion was a one-time visitor, not a resident. But now it seems our make-shift boarding house has become a morgue.

Once over the initial wave of stink-induced nausea, I sit down to breakfast at the DSE/CFA base camp in a tent with no less than 80 people. I am a social person, yet I don’t remember the last time I was alone save for my shower time (which is also rushed due to sharing bathrooms with up to six other people).

The day flies by with relatively little drama, thankfully. Working at the donations relief warehouse is not only a welcome distraction from a lot of the emotion surrounding these bush fires, but almost a necessary distraction; in order to get the job done, some detachment is required. This says nothing of the potential, though, for some emotional purging at the end of the day.

As such, after feeling physically unwell through most of the day (inspired I am sure by the rotting critter in the car), my emotions catch up with me and I barrage Kelly with a series of sentences starting with “I’m tired of…” and ending with things both rational and otherwise. Despite having a day off two days ago, I think I need another.

For now, we wind down with some friends, distracting ourselves a little further. Distraction has now become a survival tactic.