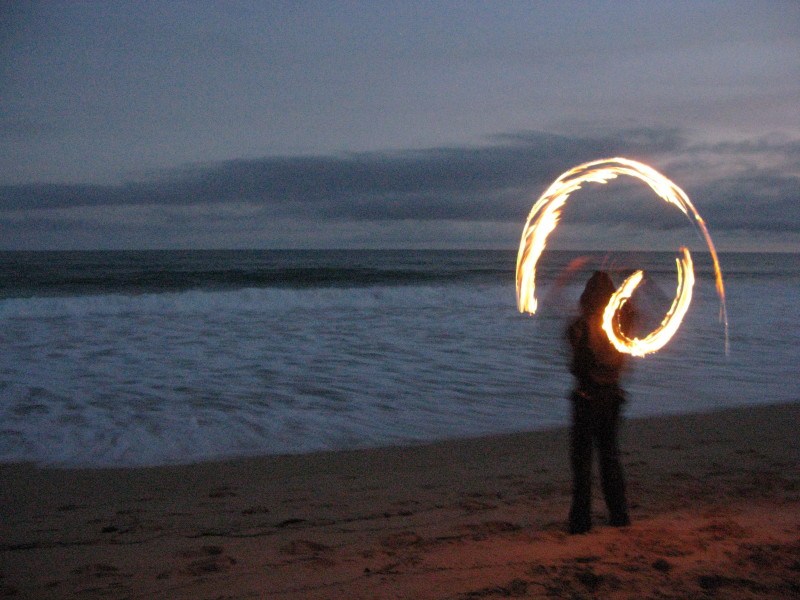 Enjoying the ocean, and a different kind of fire…
This post about my experience of the Victoria bush fires was originally published in 2009. It has since been updated for accuracy of links and content.

Too many “last straws” have come and gone…we need a rest. My own small break in taking a trip to Melbourne was not exactly restful, and Kelly has worked two full weeks in a highly-charged environment with just one day off. And so the rest is granted, when a friend who lives on the coast calls to say they have left town for the weekend, and the keys are in the door to their beachside home.

We need this break badly…the smoke, the emotion, the politics, and simply continuing to be evacuated has taken a toll. With a few days of rest, we are confident that we can return to the tasks at hand with new vigor.

The six hour drive to the tiny community of Golden Beach, located on the famous stretch of Ninety Mile Beach (which leaves little to the imagination), is half the fun….ROAD TRIP! And pulling into this quaint beachside town is the icing on the cake.

Highlights of our time off include spectacular fish and chips on the beach, doing handstands, collecting sea shells and sea horses, and spending hours contemplating the waves.

On the drive back, a slight detour rewards us with bay-side foliage that is a dead-ringer for Hawaii. We reminisce about times gone by, before returning to our reality.

We arrive back to our smoky community to discover that our home (to which we were sincerely hoping to return) is under the most severe threat since the fires began. All remaining residents (and yes, some residents did remain after the initial evacuations, as there is no way to force an evacuation on anybody in Australia) are advised to evacuate tonight, in anticipation of a hectic upcoming day on the fire lines. This was the “no shit, you really need to evacuate” notice. So conceding the next night – or many nights – to continued homelessness is tough to come “home” to. We are officially over the novelty of bouncing from friends’ house to friends’ house, if there ever was a novelty to it. The desire to cook one of our special veggie-filled stir fries is percolating in us…we miss our happy healthy routines.

I would imagine that living on high alert for fire every day is not dissimilar to living in war zones or other backyards to potential danger. You exist on a minute-to-minute basis, always ready for whatever risk lays at bay to flare up and turn your world upside down. Although there is something to be said for being forced to live in the present moment (not a bad thing), overall this is still no way to live.

But how do you live then? I spoke to a fellow who lived with the 2003 fires in Victoria; relatively small fires by comparison to these. His community existed with the threat of fire and heavy smoke for six weeks before the fires took out his home and entire rural community. Six weeks. Six weeks of waiting and living with the fires, the smoke, the evacuations, the ash. Six weeks of high alert, mis-information, and rumour.

In six weeks, I can only imagine you would become complacent; we already have in just over two weeks. We remain safe and vigilant, but there is a part of me that believes this will all wash over with no harm coming directly to me or mine. This news of a six week debacle hits me hard, as I realize we could yet be far from “out of the woods”.

In returning to our reality, we are reminded of a story shared with us by a very wise friend:

“I’m looking for the tunnel,” says a woman who is in strife (the circumstances of which are irrelevant).

“What tunnel?” comes the response.

“You know – the tunnel. The tunnel which has a light at the end of it. When I am in the tunnel, at least I have direction – towards the light. I may be in the dark, but I know where to go, and I know there will be an end to the suffering,” she says matter-of-factly.

She goes on to talk about tunnels past. “When you look back at those tough times, no matter how dark and long the tunnel seemed at the time, with perspective it inevitably never seems like it was that long a time. Remember this when you are looking for your next tunnel.”