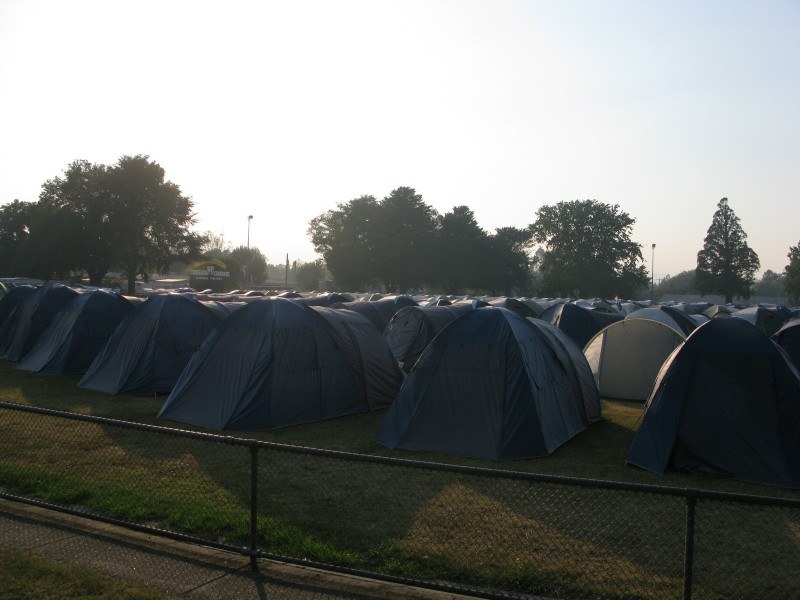 There are over 400 tents pitched at the Alexandra showgrounds, with over 600 emergency workers sleeping in shifts. (And this is not the only base camp established in the area). That’s allotta fire fighting going on.
This post about the Victoria Bush Fire was originally published in 2009. It has since been updated for accuracy of links and content.

As we pull up to the DSE/CFA base camp in Alexandra for breakfast, I see yet more tents set up in the oval. This means even more people have been brought in to combat the fires. I have been using the number of tents pitched as a barometer to gauge how bad the fires are, and how close we are to having them under control. So with this new influx of tents, I am dismayed. There are over 400 tents pitched, with over 600 emergency workers sleeping in them in shifts.

A story from the donations relief warehouse yesterday in our absence:

A psychologist calls up the warehouse, saying they are working with three refugee families who are staying in Alexandra. This psychologist is desperate to get her hands on two goldfish, goldfish being former pets of a little girl in one of these families. Sadly, we are fresh out of goldfish at the warehouse, but we are inspired. The guy receiving the request races around sourcing the fish and an appropriate bowl; no easy task on short notice  – on a Sunday no less – in a small town. After delivering the fish, we get a call from the psychologist, in tears. Apparently those two fish completely calmed and placated the three families staying in that house. Here we are running around trying to provide clothing, furniture, and household goods of all kinds, and all it takes is a few goldfish! Who knew.

Today flies by, and in a good way. The onslaught of trucks carrying donations has ebbed, allowing us to continue to sort and start to distribute the goods to those in need.

The tragic thing is that some people are capitalizing on the free goods on offer, and those who aren’t affected by the fires are taking donated relief supplies for themselves. Sadly, it appears that we will have to instate some sort of regulation to prevent this from continuing.

The media has also let go of its hold on the story; 10 days of coverage and now the fires are old news, regardless of how active they still are. This is a blessing in disguise, as most people involved with the fires have had very few positive things to say about the tone of coverage. It is the same old story: if it bleeds, it leads. Very little of that “positive story crap” graces the headlines. And so allowing people to get on with their lives in privacy seems to be welcome overall. What it will also do is curb the nation’s (and the world’s) level of awareness and empathy, but I guess you can’t have it all.

As I lay in bed contemplating sleep, I realize that I – and many others in the area – am much less pre-occupied with the idea of the fires’ destruction taking me by surprise than I was a week ago, when all this began. Not only does a little knowledge go a long way (ie: the fires won’t overtake me by storm on a calm cool night!), but it is hard to be on such high alert all the time.

So what do you do? What else? You simply go about your day.