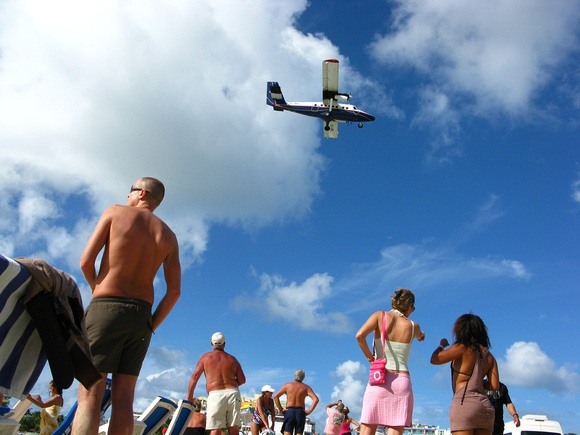 Shortly after arriving in St Martin to live on a friend’s sailboat for a few weeks, we took a drive to Sunset beach. With a name like that, I had visions of a stunningly romantic scene perfect for admiring the setting sun with a mojito in hand and toes in the sand. The warning signs along the roadside suggesting I might lose my life should have been my first clue that this wasn’t your average beach – in fact, it was the most dangerous beach in the world.

See also: 18 of the World’s Fastest, Highest, Longest (etc) Things to Do

At the beachside, people were studying a chalkboard with what looked like airline arrivals information. Being close to the airport, I presumed that many of the beach-goers were awaiting friends arriving by plane and were just killing time near the airport until the plane landed.

Little did I know…

While settling into my beach chair, suddenly there was increased activity. People stood up and grabbed their cameras, looking expectantly at the ocean. Some people even ran to a point in the middle of the beach, and positioned themselves carefully and strategically near a fence post.

My gaze followed the collective’s, to discover that coming straight towards us over the ocean was a very large airplane. A very large, very low-flying airplane.

Panic struck me. Is this normal? A plane like that, flying so low? Is it making an emergency landing somewhere close by? Will the plane even make landfall, or are they preparing for an emergency water landing?

And for god’s sake, should we not be moving out of the way?!

Before I had a chance to save my own life (much less the hundreds of other beach-goers who were way-too-casually contemplating their own impending deaths), the plane flew directly overhead with a deafening roar and landed 100 feet away on St Martin’s airport runway, which perpendicularly meets the beach.

I could have practically touched the plane. I could see individual bolts on the belly of the plane. The sound of the jet engines was so loud I had to cover my ears. A small sandstorm erupted beneath the plane’s flight path and a wall of sand flew violently and horizontally towards the ocean. People tumbled into the ocean along with the sand.

The plane touched down on the runway and cacophonously turned all thrusters on to slow its thunderous body down.

A wave of gratitude washed over me for surviving such a near miss, along with the other beach-goers and plane passengers. We all survived.

Then people cheered, and raced back to the “arrivals” board to see when it would happen again.

Welcome to Sunset Beach in St. Martin – the most dangerous beach in the world.

I’m not sure there’s anywhere else in the world you can go and actually find yourself standing directly underneath (and so close to) the flight paths of landing aircraft. The blast of air that gets displaced from a plane landing is incredibly dangerous, and can knock you off your feet – or worse.

But here, despite the warning signs, some people are brazen enough to grab onto the fence and brace themselves for this event, as if it were an amusement park ride. If the plane is big enough (and low enough), its final approach will actually lift these thrill-seekers off the ground, their feet waving almost horizontally behind them as they hang on to the fence for dear life. Other people stand closer to the water and allow the airflow to carry them into the surf where they tumble and giggle.

I don’t know about anybody else on the beach that day, but with each landing, I had to work hard to ignore the knowledge that if something should go just a little bit wrong with the landing, we all could be in a world of trouble. I do believe that Sunset Beach in St Martin must be tops among the world’s most dangerous beaches.

So it was with gritted teeth and a charge of adrenaline that I joined the ranks of the other beach-goers with my camera in hand to capture an experience that I wasn’t likely to see again (assuming I survived).

For your viewing pleasure (or terror, depending on how you see it), check out this video of the experience!

11 thoughts on “The Most Dangerous Beach in the World”