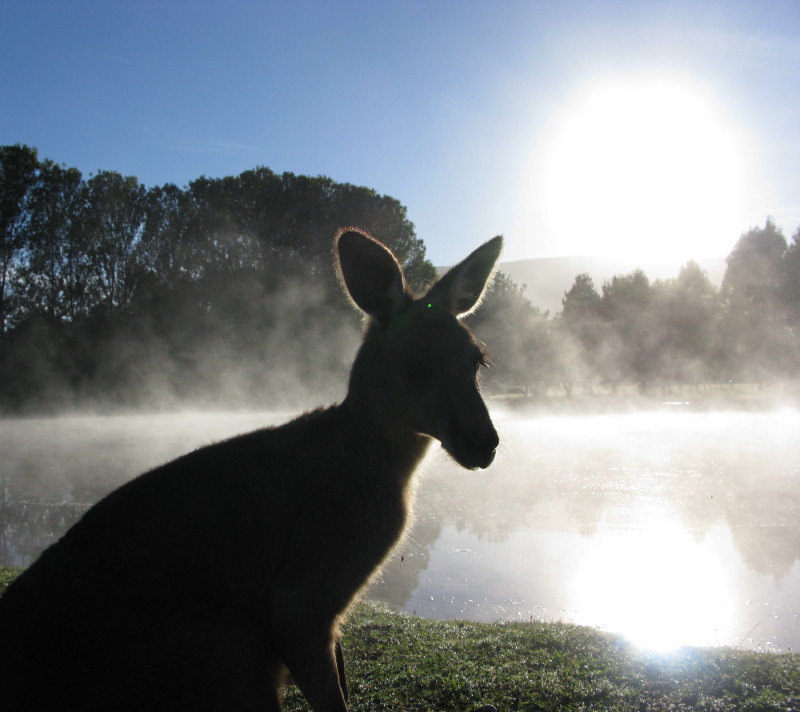 He is our watch-kangaroo. Our sentinel. And our unrequited lover.

I wake up bright and early, eager to get some writing done. I poke my head into the kitchen on the way to the living room, peering around the corner cautiously. I am on the hunt for a stalking kangaroo outside my door, hopeful that I can sneak past without alerting him to my presence. For the last six nights, he has staked out a post directly in front of our front door (off the kitchen).

Whew. No kangaroo. Into the living room I go.

The same thing: there are two sets of floor to ceiling windows on the one side of the cottage, with solid curtains closed at night to keep in the warmth. I peek through the crack in the curtains to see if I’m going to be face to face with the creepy kangaroo. Nothing in sight.

Next window: same thing. I slowly open up the curtains, and peer out the windows, slightly surprised that I’m not nose to nose with a kangaroo. He has been stationed here for the last six days solid, and has become something of an institution for us.

But since we went out the evening the night prior, maybe he decided to move on. Great. This is a good thing.

I set up shop at my computer in the living room. Shortly thereafter, it happens. I see him, slowly moving across the drive and towards the front door. He peers in, looking for signs of life. He sees nothing, and moves to the next window. I can see all this from my vantage point, but he can’t see me until he methodically makes his way to the third window.

Bingo! He sees me, and stares directly at me, his ears swivelling back and forth as he sits up and licks his chops. He places his hands on the window, balances on his tail, puts his huge feet on the window, and tries to hump it. He throws his head back in ecstasy, as he makes love to the window. Then the adjacent wood pile. Then the bicycles.

Bracken is a kangaroo who was raised by humans (sadly), and when he got too big and unwieldy, the folks here at the wildlife rescue centre took him on to teach him to be a wild kangaroo.

This setting is ideal for Bracken. He has beautifully taken to being a “father figure” for other rescued kangaroos who are being rehabilitated to the wilderness, which is on our doorstep. The environment here is perfect for the transition too; the huge property allows the animals to roam in a protected setting, and when they are ready, they can hop over the back of the hill and on to new pastures.

Many rehabilitated kangaroos also create homes on the property (there is a forested sanctuary that is completely wild and appealing to many of the wallabies, wombats, kangaroos, possums, and other critters who came to Kingbilli and were released once healed or old enough), and so we regularly see some of the previously rescued animals going about their business.

But Bracken is special. He was never wild, and so he isn’t quite ready to “go back” to the wild life. He really craves human companionship, but it isn’t healthy for him, and so we are on a program of acknowledging his affection, and politely pushing him to go of on his own. We never ever feed him, and although he is coming along nicely, he seems to have developed a weakness for my partner and I.

It is endearing to have an animal like Bracken take a shining to us. We feel honoured in a way that he keeps us company all the time, following us diligently around the property wherever we go, and living outside our door when we are inside. If only we were to open the door, he would gladly come in!

And we love his affection – sort of. Kangaroos tend to make soft “chooking” sounds when they are happy and affectionate, which is absolutely adorable in its own right.

The humping though – we could do without that. Given an opportunity, and without getting into gritty details, let’s just say he could “go all day”. In fact he does, all over objects inanimate and animated – he’s not picky.

Here’s a video of our darling Bracken. You may notice Kelly awkwardly side-stepping Bracken’s pleasure-driven advances…

It was when he made love to Kelly’s boots (which he accidentally left outside one day) that we realized how far gone poor Bracken is. As adorable as he is, the obsession has become a little creepy – we’ve even taken to calling him a “serial rapist”. But being a kangaroo with the best of intentions, it’s still creepy in a strangely endearing way – we love our creepy kangaroo.

4 thoughts on “Our (Creepy) Affectionate Kangaroo”