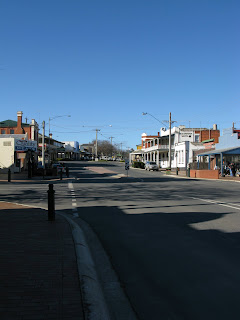 Small town life: It seems that we’re making a few waves as we integrate ourselves into the small (and somewhat sleepy) community of Alexandra, 22kms away from our work-exchange digs.

Alexandra, although it has a population of only a few thousand residents, is a hub for the surrounding communities of Thornton, Buxton, Eildon, Yarck, and our own Taggerty. Most things that can’t be found elsewhere are in “Alex,” as the locals refer to it.

After attending the local Rotary club a mere three times, we were made honourary members! I’m not convinced that it isn’t a ploy to rope us into harnessing our energy to help out with their many community projects, but if we are being played, we do so willingly. We still maintain that one of the best ways to integrate into a new community is through Rotary, and so far we are seeing that – in spades.

And we have been telling our story to some interested folks; describing the life we lead as Professional Hobos (a title that always gets a smile), and some of the work we have done (including our Burma project). This has earned us a reputation of sorts, and we are happily indulging people’s requests to speak to groups.

The Rotary club of Yea (about half an hour from Alexandra) had us speak to their club to tell our story. That in turn created a series of other speaking opportunities, which we are more than happy to oblige.

Kelly has become active with the primary school of Eildon, leading them on cross-country ski trips (I shiver at the thought), and working with the classes on some music and video projects.

And we have been woo-ed by one of the outdoor education facilities in the area too! We are delighted to be in such demand, and are making lots of friends along the way.

This being my first time living in and working towards becoming part of a small country community, I love every minute of it. Some perks:

There are of course down-sides to small town life too:

But in chatting on the phone with my mum the other day, I casually mentioned a few things in passing that I later realized were quite spectacular for a born-and-raised-city-girl:

The last point not meant to be an implication of a slightly reduced level of social activity with humans (!), these small realities (among hundreds of others) make life in the country quirky and wonderful. If I’m having a bad day, all I have to do is look out the window at the dramatic rolling hills and realize that life ain’t so bad.