How to Meet a Llama 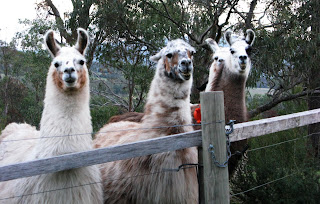 As I mentioned in a previous article, the Llama can be quite stand-offish, and we had a heck of a time getting close to these dears for the longest time. They would eye us wearily as we sidled towards them cooing and clucking in as friendly a way as we could muster, only to look down their noses at us when we got close, turn their backs, and saunter away nonchalantly.

This post was originally published in 2008. It has since been updated for accuracy of links and content.
For a more comprehensive look at my 2 years of Aussie adventures, click here.

So when we asked for guidance from the folks here at Kingbilli, we were assured that llamas are very gentle and friendly. All we had to do is talk nicely to them, don’t look them in the eye if we’re nervous, be patient and wait for them to come to us, and they’ll endear themselves to us in no time.

That was enough encouragement for us, and off we went for another round of unsuccessful llama chasing. 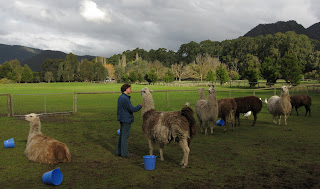 “We’ve got to befriend these guys sometime, since we’re leading eco-treks with them come springtime!” I said in a frustrated panic one day after getting covered in mud and seeing nothing but llamas stick their butts in our faces.

So I asked Georgina to take me out into the paddock and teach me how to approach a llama. Of course it was an illuminating time.

There is a very specific way to approach and interact with a llama, as I learned. Llamas are easily offended, especially if you try to touch their heads, the back of their necks, or walk right behind them. If you have really offended them, you may as well write off the rest of the day – they can harbour a grudge for many hours.

To successfully make an approach, look at their feet (so as not to make them feel threatened by

looking them in the eye), talking nicely as you walk slowly towards them. Some llamas are comforted if you sing – which is fine, depending on how badly you want to meet the llama. Stories have already been shared of large gruff male caretakers trying to round up certain llamas for an eco-trek by uncharacteristically singing nursery rhymes. Ya gotta do what ya gotta do.

If they decide that you are worthy of getting close (yes, they can be that picky), you’ll know as they won’t turn their backs or saunter away. The next step is to present your face. Most people would think to hold out a hand for introduction; no. Present your face, and the llama will proceed to sniff it (and you stand to be face to face with a llama’s head if you are about 6 feet tall). If after this courtship the llama still hasn’t backed away you may pet their neck. But beware! Only pet the front of their neck, and don’t venture to touch their backs of their necks or bodies, as it’s a sign of dominance you will likely offend the llama.

Fits of llama rage luckily can’t cause humans much harm, despite their large size and ability to hurt us if they chose to. Instead, the worst a llama can do to humans is to spit. They don’t bite, kick, or otherwise cause bodily harm. With spitting, the damage is considerably more egotistical than physical. The spit count will vary from llama to llama, and it is a last resort for them since they don’t particularly like the taste of their own spit. 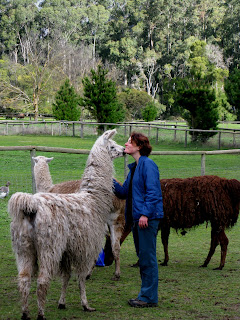 You’ll know you are getting close to getting goobered on if their ears are flat back, they squint a bit, and start masticating the spit in their mouths. It’s usually a good time to back away or change what you’re doing. Watch out for other llamas too; getting caught in the crossfire is no fun.

So far, we have been lucky enough not to be spit on by llamas, but we expect that it will be inevitable at some point in working with these lovelies. My aim is to avoid it altogether. We’ll see.

Shortly after this tutorial, I have had much more luck in meeting some of the llamas. It still takes time and perseverance, but I have had the luck to befriend about three of the dozen or so llamas on the property. One of them now comes to me when she sees me coming and follows me around constantly, sniffing and kissing my face and neck. I enjoy petting her wonderfully soft mane, and receiving her affection.

It really is quite amazing to create relationships with the larger animals at Kingbilli, and to learn the etiquette and diverse personalities of each species and even animals within the species. Somebody who has lived with farm animals might shrug indifferently at some of the things we are in amazement of. But for now, going out on a daily basis and interacting with these beautiful creatures that are on our doorstep is a joy and a very special activity that brings a sense of peace and calm.

5 thoughts on “How to Meet a Llama”