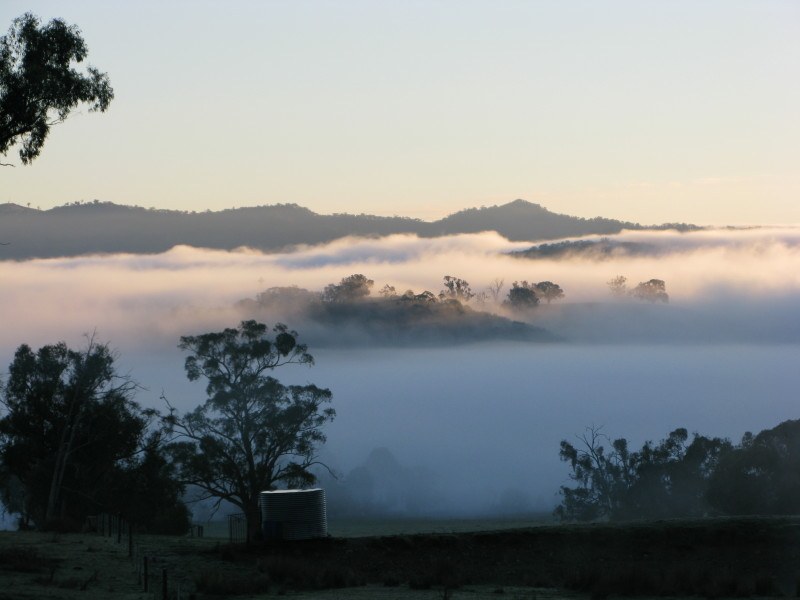 The winter fog that rolls through the Victorian countryside in Australia is nothing short of epic. Typical winter mornings see beautiful thick layers flowing through valleys, leaving only the hilltops to greet the morning sun.

My morning walks often begin in fog so thick that driving is a hazard. As I follow the road up towards the state forest with a flowing river and secluded campgrounds, I come out of the fog at a clearing; the curtain is literally lifted as I emerge from a tangible wall of white cool damp fog.

I turn around to see where I’ve come from, and the sight is magical.

The other week, fog as thick as ever set in and shrouded us for over three days. For three solid days, we did not see the sun, and could not see further than five meters in any direction. Although it didn’t rain, everything was constantly wet. Driving during this time – especially at night – was a real treat, with speeds rarely exceeding 60kms for lack of any references or ability to spot wildlife on the road.

Eerily, it reminds us of the Victorian Bush Fires, where living with smoke became a way of life. Thankfully the resemblance is only visual; instead of being caustic and hot, the fog is cool and wet. Although I’d like to use the word “refreshing”, the chilly cool winter air pretty much takes care of that – and then some.