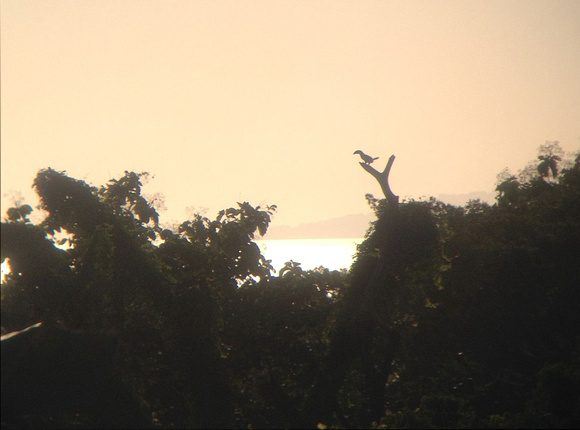 When I made the decision to travel full-time, I initially had my sights set on Costa Rica. It was a somewhat arbitrary decision, but one based on my love of the tropics and desire to see amazing creatures like parrots and toucans in the wild.
(I never made it to Costa Rica; ironically after seven years of full-time travel, the last two months in Panama marked my first stint in Latin America). And Panama’s wildlife is off the hook.

Panama is Costa Rica’s neighbour, but somehow I hadn’t made the connection that such glorious wildlife would be there as well. There is a crush of greenery and accompanying wildlife that dares to take over anything that isn’t lived in.

Even simply sitting on the terrace where I was house-sitting, armed with a laminated guide to Panama’s wildlife and some binoculars, I became entranced with spotting various forms of wildlife. I was staying in a relatively developed area, and even there, I was told pumas have made appearances to drink in the nearby stream and hunt domesticated chickens.

I never caught sight of a puma, but here are some of the creatures I did have a chance to meet.

The Birds of Panama

On arrival in Panama, I wondered if I’d stepped into Alfred Hitchcock’s The Birds; at any time, I could look into the sky and see up to hundreds of birds all circling from a few feet off the ground to hundreds of feet high in a disorganized tornado of sorts. Vultures, eagles, hawks, and a variety of other birds would engage in this circling together. To what end they do this I don’t know, but it was strange and beautiful to watch.

The birds in general had the greatest impact on me, with their colours and copiousness. I never fancied myself a bird-watcher, but in Panama, I couldn’t help myself.

Hit the beach where the fishermen come in with their catches, and you’ll find pelicans in abundance. The beach – which is strewn with fishermen’s carcasses and other products of the abundant Pacific – is a frenzied feeding ground for pelicans, vultures, egrets, and other scavengers. If there’s no action on the beach, the pelicans all roost in the trees, bending the branches with their weight and sheer numbers.

And of course, there is the toucan, which was a triumphant victory to spot (and take pictures of!), and for me, represents the magic of Panama’s wildlife. Their call is unique, akin to a croak or a wooden dowel on a washboard, and every time I heard one I had to try and spot it.

I actually took all my toucan pictures with my iPhone through the binoculars – a feat unto itself.

Where there’s big wildlife, there’s also small. I had my share of bites from mosquitoes, sand flies, and other unidentified culprits, but it was manageable.

And not all the bugs were annoying, case in point:

I don’t know how many multitudes of flying and crawling critters I encountered in Panama (in the house!), but with the open-concept breezy design of the house it was to be expected that I’d have a few roommates.

Creepy as that may sound, they rarely were a nuisance; more often a point of curiosity than anything else.

Moths would regularly come for a visit in the evenings, drawn in by the light. So too would bats (I like bats. I’m strange that way), grasshoppers, and dozens of insects of the flying ilk.

By day, hummingbirds and huge butterflies would visit the terrace (and dozens of insects of the flying ilk).

A perk to all these insects of the flying ilk, are the geckos and lizards. I saw 23 geckos from my seat on the terrace one evening, all battling for territory on the ceilings and walls.

I’m telling you. Just sitting on my terrace in Panama was like an episode of National Geographic.

My partner had a chance to go spearfishing with some local fishermen. After a day of fishing, the two Panamanian spear-fishers alone managed to bring in 57 20lb fish – half a ton of fish – in their wooden boat with a dodgy motor, just an hour off-shore.

I balked at the take they brought in, fearing for over-fishing. But when these guys are diving down and actually hunting the fish, one by one, it seems like a much more equitable game – and all the more indicative of just how much fish is out there. (I also later learned that they fish fairly sporadically, as opposed to every day).

But then, if these spear-fishers are catching such a bounty with a mask, fins, and spear, you can imagine what more industrial operations haul in. Large shrimping vessels are consistently parked offshore, hauling in langoustinos, like these:

Panama’s Wildlife: The Other Things

I saw a few frogs (some so bright that if I had licked them I’m sure it would have been a psychedelic experience), and the odd rodent which might have been a capybara. I also clocked some possums and monkeys that visited a neighbour’s tree at dusk, and a very large iguana unsuccessfully camouflaging itself in a very small tree.

Even a family of horses wandered the area and could be found grazing outside the front gate some days; they were technically owned by a family in the area, but had roaming privileges.

I encountered most of Panama’s wildlife passively; I didn’t go on an eco-trek or deep into any forests. With the abundance of wildlife, most of the time all I had to do was sit on the terrace and be observant and quiet, and it all came to me.

Sounds to me like another good case for slow travel.

22 thoughts on “Living Amongst Panama’s Wildlife”