Faces of Panama – A Photo Essay 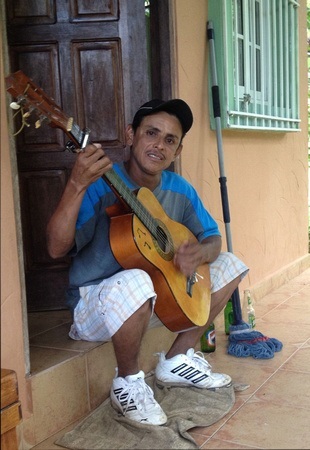 While house-sitting in Panama for almost two months, I came to see a side of the place that I may not have discovered if I was there on my own. In traveling with my partner (who looks more like a local than a gringo – and has inspired a post about travel as an interracial couple, coming soon), I was welcomed into a very local side of the small village of Veracruz, which gets its roots from fishing. These are the faces of Panama; the people I met and their stories.

You’ll see that most of these pictures are of men. This is because of how and where we were initially welcomed into the area. Had I stayed longer, I’d have met many more women who might not have been as camera shy.

Anthony Bourdain once said of traveling the world: “Drink heavily with the locals wherever you go”. I’m not a drinker, but I did my best to nurse a few beers and discover if there was truth behind this idea.

He was right. Here’s what happened:

This is the kind owner of a local bar – a man who we came to call “Papi” for his fatherly demeanour. We were driving by his bar shortly after arriving, just exploring the area, when he came out and waved us in. He was instrumental in making us feel comfortable, and protecting me from anybody who might try to hassle me.

During subsequent visits, he fed us many times, we were invited into his home, we met all his family, and he told his life story. You might not know it to look at him, but Papi – like many Panamanians that defy first impressions – is quite well off, owning multiple homes, large plots of land, and businesses.

This is a group of fishermen who we met next to Papi’s bar, which is at the hub of the town’s plentiful fishing activities. I wasn’t there on this particular outing, but I’m told while all the women were upstairs cooking on this Sunday afternoon, they did boys did what boys do.

Ricardo, as soon as he met me, took off the necklace he was wearing – a traditional Panamanian flute/whistle – and gave it to me. “Hermana” he said (meaning sister), when he refused the money I tried to give him as thanks.

When Ricardo’s friend saw me taking pictures of the plentiful pelicans on the beach, he wrangled one for me to get a closer look at it. The pelican was none too thrilled with the exercise, so I got a few shots and encouraged them to let it go.

What I didn’t realize until a few minutes later was that they actually tag the pelicans to track their patterns. After our little photo shoot, they gently tagged and released it.

This guy was a little over-enthusiastic about everything, but his intentions were good….

This man seemed a little strange at first, sitting in the corner and not talking to anybody. One day we were invited to plug in our iPhone and play some of our music. (Teaching Latin Americans how to dance to reggae was very amusing).

As soon as a song by Adele came on, this guy came to life, jumped up, and started dancing like he was at a rave. After coming together through music, if we ever ran into him at Papi’s bar, he regularly bought us drinks and ended up being a good conversation partner, and a very kind gentle soul.

This guy was enthusiastic to have a picture with me; he was very careful not to actually touch me with his hands (I took this as good manners); but the hand coming out from under my arm pit was a bit strange (ha ha).

During one of Panama’s typical downpours, this family who owns a shop selling langoustinos (which are like giant prawns) scrambled to save their stock as the water rushed into their home and business. They lost it all that day, but they never seemed to lose their smiles.

As I wrap up my house-sitting gig in Panama, I’m thankful for seeing these many sides – and faces – of Panama.

15 thoughts on “Faces of Panama – A Photo Essay”