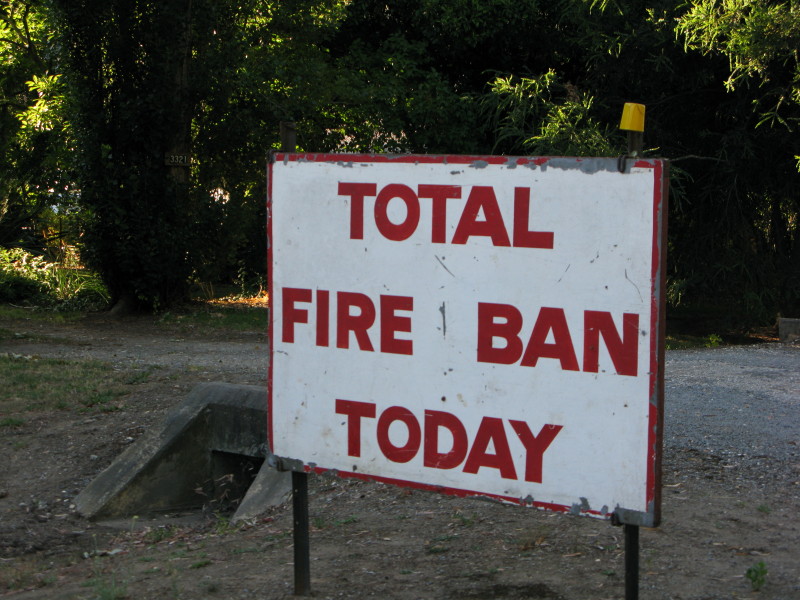 Today is a total fire bans day. The air is heavy (but not humid) as I step outside from the cool respite of our practically-air-conditioned-it’s-so-cold cottage. I walk into the sunshine, and even at 3pm I immediately feel its rays burning through the first few layers of my skin. Even a breeze on this calm day hurts, creating a sense of being in a convection oven rather than cooling the stifling temperature that stubbornly sits in the air. As it is, nothing stirs. Even the abundant wildlife is quiet; reserving their energy in the dry heat of the day. Except for the flies. If your face is not covered in these moisture-seeking vermin, the constant eerie buzz that comes from everywhere and nowhere is enough to drive you crazy.

This is what 40 degrees (Celsius) looks like in Australia.

This post was written just days before the Victorian Bush Fires – an unprecedented event in Australia, and one that I found myself in the middle of. Read more about that here.

Australia is hot and dry. You don’t need to visit here to know that. To foreigners, Australia conjures up visions of a vast red outback, miles upon miles from the nearest drop of water or scent of civilization. In some places – many places in fact – this vision is not far from the truth.

But in the southern state of Victoria, I had not expected this. Sure, people told me over and over again about 40 degree days, and even 50 degree days, but I tempered what I heard with a dose of Australian exaggeration and let it be. I had yet to experience any of this legendary heat, and had become somewhat skeptical about the whole thing. How hot could it really be? I mean, really.

But this is one area that locals have been pretty honest and accurate about. “If people say they love the heat when it is this hot, I know they’re lying,” said one Aussie friend of the 40 degree days that occupy up to 30 sporadic days of a Victorian summer. “It’s just too hot to enjoy,” he says, wiping the sweat from his brow and wishing the water shortage was not an issue so he could have multiple showers a day.

This is the same friend who is on call with the CFA: a rural fire brigade with stations in every town run entirely by volunteers. These brave individuals put their lives on the line to fight local fires. And they are an integral part of society: fire is a big deal in Australia.

Fire is such a big deal here, that it becomes a major focus of the weather forecasts. Not only is the weather anchorperson dancing in front of a green screen that shows high and low pressure systems, tropical cyclones ravaging northern Queensland, and temperatures that regularly exceed 40 degrees, but the screen is also adorned with little fire icons to show where fires are currently burning, and sections shaded in various hues of red and orange illustrating the fire risk in each region.

Fire restrictions begin in December as summer starts. You can only have a fire under certain circumstances, and oftentimes you require a permit to even light a fire. Out here, one gust of wind on a hot day and your little campfire or burning brush-pile could turn into another epic event destroying entire communities, many of which are mourned and solemnly remembered.

When the temperature and dryness increases, so too do the fire restrictions. Earlier this week, with a high of over 40 degrees, we saw a few Total Fire Bans days. Having a fire of any kind, anywhere, is strictly illegal. Even camping with a little portable gas-fired stove is prohibited, as is working with certain tools that may generate sparks. This explains the prevalence of flat hot plates as barbecues instead of the customary open grills we are used to in North America.

Volunteers with the CFA are on high-alert on Total Fire Bans days, remaining within a few minutes of the fire station and wearing pagers, waiting for “the call” they hope will never come, but which inevitably does at least a few times each year. Their employers are duty-bound to let them go at a moment’s notice, and if the fire is bad enough, a bus goes through the town rounding up all able-bodied people to help fight the fire and minimize the destruction.

So my prayers have finally been answered: I am in the lap of the legendary Australian heat. And although I would like to say I love it, the jury is still out. It is a novelty for me yet; give me a few more 40 degree days and I may be singing a different tune before too long.

I guess this is a lesson in being careful what I ask for!

5 thoughts on “Legendary Heat and Total Fire Bans: Welcome to Summer in Australia”