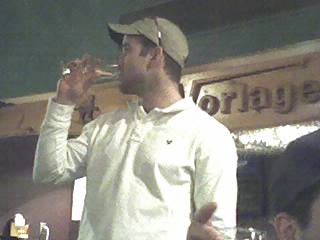 Fair Dinkum: (pronounced in true Aussie form as fay-ah ding-kum). Originally meaning “fair drinking” by a less-than-sober gentleman, “fair dinkum” is one of many intriguing pieces of Australian vocabulary that has only recently been explained to me.

This post was originally published in 2009. It has since been updated for accuracy of links and content.
I’ve since had many (many!) Australian adventures and cultural observations, which you can peruse here.

In the course of a conversation with an Australian, various foreign words and phrases are regularly interwoven through sentences. These words and phrases tickle my ears in that they either do not quite make sense in their placement, while others yet are simply incomprehensible to me. I usually chuck it up to my own less-than-spectacular sense of hearing in addition to a sometimes thick Australian accent, and I simply let conversational bygones be bygones. (Contrary to popular Australian beliefs, I do not have an accent. The entire population of Australia, rather, does).

But after hearing the term more than a few times, and then hearing Kelly try to incorporate it into his own vocabulary, I broke down and asked for the meaning. I got a few hums and haws, and was eventually given both the long and the short meaning of fair dinkum.

Short Meaning: If I am to understand correctly, fair dinkum is a statement of confirmation. It could be interchanged with “no, really!” or any other phrase that indicates that the speaker really means what they are saying. No legs are being pulled (as is a common pastime among Aussies), as fair dinkum implies that it is the real deal.

Long Meaning: After a long night of drinking at the pub (another common pastime here), a fight broke out. The fight escalated into an all-out brawl, which got ugly. One gentleman in particular, although incredibly drunk, found himself breaking up the fight and playing mediator. “Fair dinkum, fair dinkum” was his repeated mantra to the masses who were slowly coming around. What our hero was actually saying, however, was “fair drinking, fair drinking,” but between his drunken state and thick accent, it came out as fair dinkum. The phrase implied that everybody’s temper was heightened due to being drunk, but that all they were trying to do in the first place was have a few drinks and enjoy some camaraderie with others. “Fair drinking”, or fair dinkum, was what he encouraged everybody to get back to doing, and end this pointless fight that would lead to nothing but regret and pain the following day.

Although I could postulate on the relationship between the fair dinkum story and its contextual use today, this is the story as it was told to me and I would be spinning my own yarn by making assumptions. Suffice it to say that I am enjoying this knowledge and embrace of new words and phrases, as I continue to delve deeper down the Australian rabbit hole.