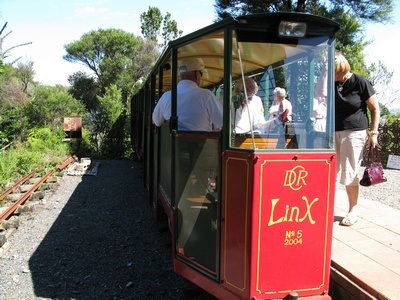 With 16,000kms of Australia’s rail lines under my (slightly maniacal) rail-enthusiastic belt, I recently conquered the formidable train infrastructure on New Zealand’s Coromandel peninsula: all 2.6kms of it. It’s Called Driving Creek Railway.

But this 2.6km train journey has a story all its own; one of art, conservation, and engineering.

This article was originally written in 2011; it has since been updated for accuracy of links and content.

Coromandel town is the nearest town to Mana Retreat (where I have been a part of their work exchange program). It isn’t exactly a bustling metropolis, but is a nice place to enjoy a latte or ice cream, a seafood lunch, and browse the half a dozen tiny gallery-type stores. It’s full of character – and characters – and at the height of the tourist season during the Celtic Fair, this small town of 1,500 swells up to over 10,000.

But back in 1973, Coromandel didn’t even have 1,500 people to its name. This is when Barry Brickell bought a 22 hectare (60 acre) block of hilly land three kms north of town with a vision akin (in my mind) to Kevin Costner’s character in Field of Dreams. Barry wanted to build a narrow-gauge railway to the top of the mountain; envisioning a train that would carry hoards of passengers – tourists – to the top of his mountain of scrubby bush.

Despite Coromandel not being a huge tourist draw-card in the early 1970’s, Barry was quite content to pursue his dream and vision of creating this railway – a project that took him 32 years to complete.

It was an uphill battle – pun intended.

Before boarding the train, I watch a DVD about how Driving Creek Railway came to be. Interviews with Barry reveal that he’s a quirky potter with a streak of sarcastic humour that takes the edge off his fierce determination. It is the marriage of these qualities that nurtured his commitment to building the railway in the face of complete adversity.

He talks about how his father, accountant, bank manager, and “so-called friends” accused him of wasting his time on building a miniature railway.

And from the outside, you can’t really blame his family and friends for thinking they were talking some sense into him. It wasn’t like Barry had any particular knowledge or expertise that lent itself to building a railway like this. Although most people would go to school for engineering or to study some range of skills that might assist in the project, Barry turned his nose up at formal education, saying that going to school just makes you bored stiff and knocks the knowledge right out of you.

Instead, Barry figured it all out on the job. He was inspired by the switch-backing railway systems that climb the mountains in Peru, and simply said “If they can do it, so can I.”

And so he did.

Examining the incredibly narrow 15” gauge rails, it’s tough to believe there’s a train that will take me and the other 30 or so passengers up to the top of the mountain, almost 200metres above where I stand. But sure enough, moments later a three-car toy train pulls up and offloads the last group of passengers, all beaming with smiles.

Sitting in the train is a knee-to-knee experience with other passengers in each car, but it’s cozy and feels a bit like an Alice in Wonderland moment; like we have all been shrunk down to a size just big enough to fit into this train you could envision chugging around a little model toy world.

After being expressly informed we can’t stick our heads or arms out of the train, we’re off. The reason for this adamant caution quickly becomes apparent, as in many spots there is little to no leeway on either side of the train – through tunnels, across viaducts, and amidst dense foliage.

Knowing that Barry tackled this impossible feat on his own (hiring local contractors only for the major earthworks) makes the ride all the more unbelievable. To gain the 200 metres in altitude, we traverse across major viaducts (double-decker no less), around two spirals, through three tunnels, and five reversing points (where the train actually reverses direction in a zig-zag fashion, effectively switch-backing up the mountain).

Along the way little pottery treasures are everywhere to be found; an elf sitting on a tree stump, faces and murals melded into the terracotta tunnels, and impromptu sculpture gardens. There is almost too much to see in one go.

Half an hour later, we’ve made the 2.6km journey to the top and have ten minutes to enjoy the incredible views from the aptly-named “Eyefull Tower” before heading back down the way we came. Our driver recites a well-rehearsed, informative, and delightfully sarcastic commentary about the area, which is when the conservation angle to Barry’s mammoth project makes itself known.

The land that Barry bought in the 1970’s was once rife with kauri trees – majestic native trees that live hundreds of years with massive trunks. Unfortunately the majority of kauri trees were harvested when settlers arrived, and Barry is on a mission to reforest and regenerate the kauri and other native species. He even uses his narrow-gauge railway to transport the seedlings up the mountainside for planting.

Driving Creek Railway (which is actually called Driving Creek Railway & Potteries) is also a formidable pottery studio home to resident and visiting potters and glass blowers, with demonstrations and wares for sale, in addition to the works of pottery art that can be found alongside the train tracks.

When you visit, you might even see Barry, now in his seventies, quietly pottering away on a new work of art or ware. Barry did what he set out to do almost four decades ago, and now he’s enjoying his own little eden – a place that is appreciated by thousands of people each year.

Everybody I spoke to in Coromandel said the railway is a “must-see”. And the train is a quirky ride with lovely views from the top. But what really makes the experience sing is the story behind how the railway came to be: Barry’s passion and fierce conviction to create this railway against so many odds; to create a place where he can work on and display his pottery; and to give back to the land through native species regeneration.

You just can’t fault a guy with determination to play with his passions.

How are you playing with your passion?

5 thoughts on “Driving Creek Railway: A Different Kind of Train”