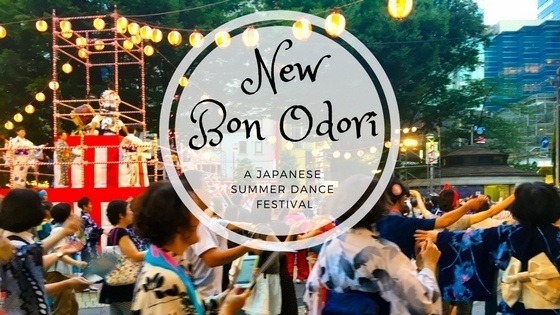 Before I knew what was happening, I was wearing a yukata (kimono), surrounded by thousands of people, sweating in the rain, and performing raunchy dance moves next to an eighty-year old Japanese woman who was doing the same raunchy move like it was any other day. Welcome, to New Bon Odori!

By random coincidence I learned that fellow travel bloggers Jess and Hai of Notes of Nomads were living in Tokyo while I was house-sitting there. (I had recently migrated to the same managed hosting service as them and e-met Jess on a related group forum).

A few emails later, we agreed to get together and attend their favourite Japanese summer festival: New Bon Odori. All I knew was that it was a new take on traditional Japanese dancing, that doesn’t require knowledge of dancing, but does require participation if you want to have fun.

What is New Bon Odori?

Before we establish what New Bon Odori is, let’s talk about Bon Odori – which is a Japanese style folk dance, performed around a central stage and under traditional lanterns.

New Bon Odori is a new take on this old faithful. This annual event has taken place in Tokyo’s Ikebukuro neighbourhood since 2009, and is run by a famous Japanese comedy dance troupe, who keeps the evening light and enjoyable.

It’s considered a fairly unknown festival (“only” a few thousand people come, which by Tokyo standards, is hardly anybody). For me, it was the perfect size.

How the Night Rolled

Jess lent me one of her yukatas (traditional casual summer kimonos) to wear for the evening, which was a real treat, and is a Japanese summer festival must. Yukatas are complicated attire, and while Jess was helping me dress in a nearby department store bathroom, the elderly bathroom attendant pushed her aside unceremoniously and took over. She spun me around and bound me into this rigid outfit in an almost comically efficient way. Dazed and confused and standing straighter than I had in ages, I emerged from the bathroom smiling widely in full yukata regalia.

We arrived nice and early to the open square near Ikebukuro station; in time to learn the first few sets of dance moves as taught by the eccentric comedic dance troupe. The moves were pretty easy, and the dances were repeated through the evening. Once learned, the troupe would kick in with drums and music and singing, and off we would go, around and around the central stage performing our moves. The closest approximation to New Bon Odori I can approximate is that it’s like Japanese line dancing. Except cooler. (Wearing a yukata automatically amps up the cool-factor in my books).

As the evening progressed, more and more people showed up, and given the oppressive Tokyo summer heat, we were actually relieved and refreshed when it started raining. (It didn’t last long so it wasn’t a party-killer).

The craziness escalated with each dance; one dance a revered “special guest” joined the troupe on stage to teach us the moves: some sort of costumed cartoon anime character who made a splash with the locals.

It hit an all-time high when a troupe of young women took to the stage to help teach the craziest dance of the night, complete with riske dance moves that earned English nicknames by the troupe such as “double-click” (to represent a sharp double-thrusting of hips) and “sandwich” (an indescribable move that involved much touching of private parts).

Once I picked my jaw up off the floor, I looked around to see that people were relatively unfazed by the instructions; this was just good clean New Bon Odori fun in their books.

Check out New Bon Odori in action, in this week’s vlog episode! If you’re ever in Tokyo in July, I highly recommend attending this fun festival. Knowing how to dance is not required; the only pre-requisite is an open mind and sense of adventure.

Robot Restaurant: “The Greatest Show in the History of Entertainment”

2 thoughts on “Dancing in Kimonos at New Bon Odori in Japan (VLOG Ep. 19)”