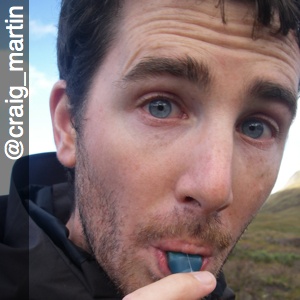 Craig and Linda Martin have been traveling around the world full time since February 2006. The middle of 2010 finds these two Kiwis on the tracks between Berlin, Germany and Utrecht, Holland while they work on their company, Indie Travel Media Ltd producing websites like the award-winning Indie Travel Podcast. Please enjoy a week-in-the-life of Craig Martin, full-time travel-blogger.

This morning I wake on a sofa, light streaming in the windows. Linda sleeps on a mattress across the room; a nice room near Platz, Berlin.

We met our host, Claudia, while walking the West Highland Way in 2008 and now we’re finishing a few days’ visit with her. Between breakfast chat at a healthy 10:30am we check email (action, pending, reply, archive) and upload a travel video to youtube.

Gear packed into two backpacks (35 and 45 liters), we head over to meet Benny the Irish Polyglot for lunch. We found Benny on the Couchsurfing network and I’m excited to be staying with him for a few days after knowing about his travel and language blogging for years.

After lunch we finish shooting his music video, then forget to validate our train tickets.

A few hours of writing and talking about work back at Benny’s then it’s off to a Couchsurfing meeting in a local park. We leave a bit before Benny so we can wander around town and shoot some video. At Couchsurfing we mainly speak Spanish with other tourists, and organize to meet a few people in Barcelona later in the month.

Slept in on a mattress in Benny’s living room. He had been up and working online for over an hour before we started to move. Thirty minutes late for a meeting with Paul Sullivan.

Paul’s a leading light in Matador’s photography school and runs Slow Travel Berlin. We meet in a small organic/local food café, relax for an hour and record a Berlin travel interview for Indie Travel Podcast before he has to leave.

As Paul walks out the door, our friend Momo arrives. He shows us around some new areas of Berlin, we record video at the EastSide Gallery and have a few drinks by the riverside. Momo leaves; we try to pick up a backpack put aside for us at Jack Wolfskin.

The search for the best backpack has taken over six months now, so we’re excited it’s drawing to a close. Staff had put aside the wrong bag, and sold the last of the model I wanted. Not back in stock until September; we’ll be in Asia by then. Back to the drawing board.

We join a free walking tour of Berlin recommended to us by a guest writer and several of our listeners. The tour has almost 50 people and, although the guide is interesting and animated, being herded around hacks me off.

We head back home and do the busy-work of social media updates, emails and accounting until we head to another couchsurfing meet up. This one’s just Spanish-speaking, so Linda’s really excited.

No-one’s around for the Spanish meet-up, but by the time we grab a beer, Benny and Momo show up. We order food and Claudia meets us during dinner. A great meal with great friends, our last in Berlin, and we finish things off with a wee dram at “Scotch and Sofa”. I must remember to start a bar with that name later in life.

Work and travel, ends in a castle

We wake early, say goodbye to Benny and head for the rails. We’re traveling on complementary Eurail Passes thanks to Eurail.com, so it’s first class all the way, baby! First class on a German train is something special: empty cabins and in-seat coffee and biscuit service make for a productive morning. Linda writes while I furiously edit video and deal with some of 100+ emails in my reply-to and action-me folders.

We stop for lunch in Cologne, meeting one of Linda’s language exchange partners for the first time. They met on italki.com and have spoken for hours on Facebook and Skype chat. Lunch is fun, but we only have 50 minutes before we’re back on the train to Ghent. The afternoon is a lot like the morning, but this time I’m focused on polishing off some stories, guest posts for other websites and a few opinion pieces for sites of my own.

Walking through Ghent station, we meet our host, Tom de Windt. We met Tom while walking 1000km through Spain — the Camino de Santiago – in early 2008. He says, “Let’s go to the castle,” by which he means a … real freakin’ castle!

We’re spending the next few days in the property of the Duke of Flanders, where Tom works as a caretaker. He walks us through some of the extensive grounds as we catch up, then it’s into town for a relaxed pub crawl and extensive Belgian beer tasting.

My morning starts with a conference call with my New Zealand business partners at my board game company SeriouslyBoard.co.nz. They’ve just had their first baby, so their late nights and my late mornings are working out. We talk shop before I start on a rampage of post-scheduling and media uploading. I also trade emails over Top Travel Content Europe and add some new members there. In short, there are over 100 things on my to do list and I’m committed to getting it down to the twenties before we leave Ghent.

I’ve also started reading the Four Hour Work Week, after years of being bugged about it. Seems a lot like my life, but I do more hours. Probably fifty hours a week. And earn less money. Lots less.

In the afternoon we head into town with Tom. He’s become a tour guide since we last saw him and starts work in South America in a month. He shows us around, telling stories and we regurgitate some local legends for the camera: raw footage for half-a-dozen Ghent-based travel videos we’ll produce.

One of the things about life on the road is you don’t get to binge very often. You need too many things: an empty lounge, a pile of junk food, and a TV you can understand. Luckily we have all of those things and — from 9pm when we stop working —indulge in night of bad food and good comedy while Tom works.

Can we escape the castle?

At 10am I finished making my first coffee for the day and sit down to work. Some phone calls all over the world, emails to write, end of month accounting to try and sort out, bills to chase up, traffic and earnings reviews to make, interns to instruct and get feedback from, upcoming plans to revise, content to create, edit, schedule, publish, a few work friends to chat to online and arrange upcoming events.

The castle is beautiful, but I begin to doubt we’ll ever leave. At 5pm it is time for a break, so we walk to a local supermarket, buy some dinner food, and return to our apartment. Back to work. Got to get that to do list below thirty, and make sure I’ve replied to all emails older than two weeks for non-urgent messages and two days for urgent messages.

Tom is working until around 1am, so I stop work and we make some dents in a bottle of champagne and another of whisky. It is our last night together, and Tom’s last day of alcohol for a month.

On the rails again

After a morning split between working and goodbyes, Tom drops us at the station and we set off for Utrecht, Holland where we are to be based for the next few days. The train is late, we miss a connection, and get rained out of our outdoor café in Antwerp.

In Utrecht we’re staying with our friends Floor and Bregje, who live just minutes’ walk from the station. It’s a shame we’re looking for their house at the wrong station, but a phone call quickly sorts that out. All in all, not the most successful of transits!

We spend a little time uploading some work finished on the train and sending/receiving emails. But we are really keen to get out and about.

Awake? Email. Facebook. Twitter. Coffee. Awake. More coffee. It’s time to check numbers on several affiliate systems, analytics, banks and social media platforms. These numbers are more than an ego competition; if they’re heading upwards we’re getting closer to our goal of completely location-independent living. At present we still teach English for a few months every year to top up the budget.

Breakfast is sprinkles on toast before we beg and borrow some bikes and head out into the amazing warren of cycle paths. It’s very Dutch.

We follow canals and pathways into the countryside and end up at a pancake house at the end of a narrow road. The pancakes are huge, and very Dutch.

We take a shortcut home, but the rain still beats us. That’s OK, cycling in the rain is very Dutch.

I do some more work, desperately trying to keep up with emails in the 30 minutes a day I’m trying to do it all in. Gmail’s “Filter Skip” inbox feature is becoming one of my new best friends. Working on Sunday isn’t very Dutch, but it’s a normal part of my life: work is anywhere, but it’s next-to-always.

I get to switch off during the evening, as we settle down to dinner then a movie which is, appropriately, very Dutch.

That was a normal week for Craig and Linda! They’re constantly on the road these days…they’re  in the UK right now, and enroute to Kuala Lumpur at the end of the month. Check out their award-winning website Indie Travel Podcast to find out! You can also find Craig on Facebook and Twitter.

3 thoughts on “A Week-In-The-Life of Craig Martin: Indie Travel Podcast”