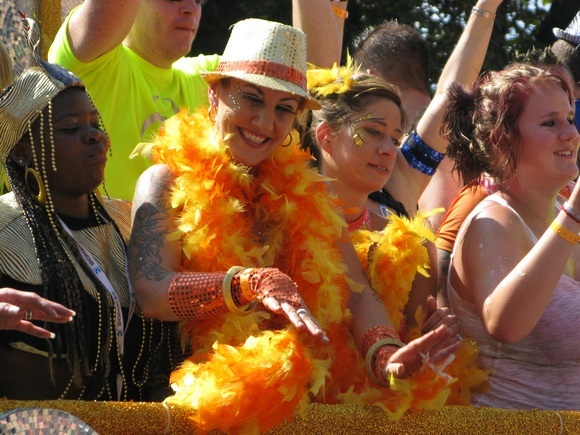 When I emerged onto the hectic streets of Zurich for Street Parade, I immediately realized I was overdressed.

Suddenly it made sense why everybody had been asking me what I would wear to Street Parade. Some people evidently take their wardrobe-planning very seriously for this, one of the biggest techno parties in the world (and Zurich’s largest annual event).

Myself and a million of my closest friends gathered in Zurich on this day – the second Saturday of August – to dance, wander, gawk, and revel around Lake Zurich.

Street Parade is officially a demonstration for freedom, love, and tolerance, and although it has morphed since its beginnings in 1992 (with just 1,000 attendees), it’s still legally considered a political demonstration. (I think that’s how the city of Zurich justifies paying for this mammoth event).

And with a million attendees packed into a relatively small area, I was amazed to feel quite safe milling about; Street Parade is one of the safest mass events in the world.

The festivities begin in the early afternoon with outdoor stages interspersed around downtown Zurich pumping out the tunes. There is an actual parade of various “love mobiles”, which are basically themed moving dance floors with DJs mixing tunes as they lumber slowly through the crowds.

The party continues into (and through) the night with official and unofficial parties taking place all over Zurich. The musical theme is techno and house, so you’d better like a bit of thump thump if you’re attending. Even if you don’t like that kind of music, it’s easy to be swept up in the air of celebration.

I understand why hundreds of thousands of people travel to Zurich just for Street Parade each year. I’d like to make a point of returning myself in the future.

Check out this video for a better idea of the feel (and sounds) of Zurich’s Street Parade 2012: