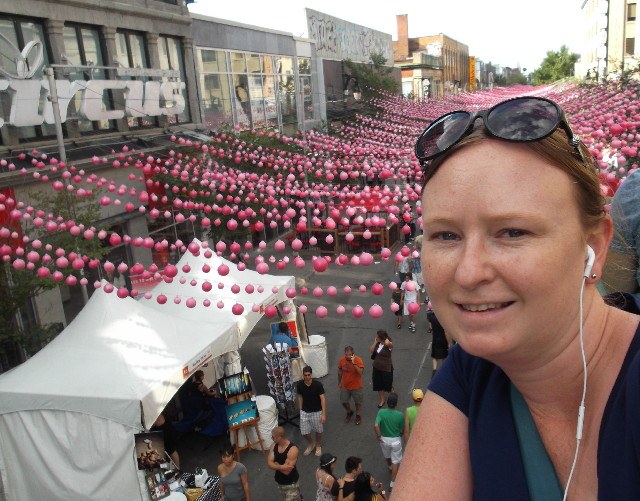 Tash is an Aussie who has been traveling and blogging since setting off to London for a 2-year working holiday visa in 2005. Since then the travel bug has been her companion interspersed with periods of work. A social worker by trade, she’s currently working on her Master’s degree, which has brought her to Toronto for the summer for an international exchange. Please enjoy this week-in-the-life of Tash as she gets used to the Toronto life!

I wake up early on this Canadian public holiday in Montreal, and make it to the main transport station and my bus to Ottawa. This long weekend has been my chance to see several of the bigger cities in Canada, including Quebec City.

From the moment the bus pulls in, I am off on foot to soak in as much of Ottawa as I can. I grab a quick breakfast and then walk through the shiny downtown buildings before taking in the grand Parliament Hill buildings. Gorgeous!

I end up doing a tour of the interior, cos it’s so hot and sunny and I am wilting! But I am surprised by how impressed I am with this government hub of Canada, and learn so much about the political structure of my host country. I am also delighted to see the gorgeous library, and also take in the view of the city from the top of the Peace Tower.

Trying to use as much shade as I can, I wander past the canal and down to the river’s edge to take in the view of the city from a different perspective. I have a very late lunch, and indulge in the Canadian dish of poutine, before finding the public bus out to the airport and back to Toronto.

I am amazed that I can get to and from Canadian airports on local transport, as I make my way home to my AirBnB room in a share apartment that I have booked for the whole Summer. Pretty happy to be back to my own temporary bed!

Back to the shortened work week, I walk to work at Sick Kids Hospital to save money and also continue my experience of the city as it comes to life in peak hour. As part of my work, I see families and assist them with their identified needs, I support new parents with a new and difficult diagnosis of their child, and I complete the administration and documentation required of a Social Worker in such a work setting.

Once home at the end of the day, I finally get a chance to check out the many, many photos I have taken over my long weekend travels, and plan some blog posts. I write and publish one, and plan parts of several others as I edit photos and choose which ones I could use for the initial posts about my weekend. I also catch up on blogs from Google Reader and on Twitter, and start to look at flights for my next long weekend away.

During my first week in Toronto I attended the Doors Open Toronto event, and while awaiting the beginning of a walking tour, I started chatting to a local. She and I chatted throughout the tour, and then connected on Twitter when I had returned home that day.

This new friend in my new city has kept in touch, and has a love of movies as I do, and she invites me on this heatwave Wednesday to attend a premier movie screening with her, a double pass that she won.

I walk to the impressive Tiff Bell Lighthouse in Downtown Toronto from work that evening, and we take our seats in the cinema. Not gaining a wage from my current work, I am keen to save cash but also do and see as much as I can, and this kind of opportunity allows me to do just that!

The movie turns out to be amazing, and a movie I most definitely would have viewed back home as part of the much loved Melbourne International Film Festival, a Winter tradition of mine. So, a night with a new friend, plus a really great movie! Perfect!

Finishing my one extra long day at the hospital for the week, on the walk home I stop at the supermarket and buy supplies so I can cook at home, and have meals made for several evenings frozen in the freezer, again to cut down on my spending with eating out. Once fed and all cleaned up, I spend more time on the blog writing posts from my weekend away. I catch up with friends and family from around the world over Facebook and emails, and free texts on an app on my phone.

Still undecided about the route to take on my next weekend trip, and trying to find options that fit within the funds I have allocated for side trips within this Summer stay in Canada, I research what seems like a million options and combinations of flights and dates. Gaining some knowledge, and a little frustration at not finding exactly what I want, I end the night without flights booked, but with a better idea of what will be possible.

Friday nights have become a bit of a mission for myself and one of my Aussie friends to visit a different restaurant and neighbourhood of Toronto, each week. This involves a bit of research, and emails and texts back and forth during the week to figure out a good option for that particular week, and often involves seeking recommendations from people we have met here.

This has allowed me to see areas of the city that I have not otherwise had a chance to visit, and it has also treated us to the vast array of multiculturalism here in Toronto.

This week we venture to what the locals call The Danforth, also known as Greek Town. Here, we have pre-dinner drinks at a pub, and a catch up on our respective weeks. Then we go to the recommended destination for a delicious Greek fest…amazing! Afterwards, we dabble with a play in a toy store which looks too inviting not to pop into, and finish off the outing with a gelato stop. These nights are always such fun!

When the pieces were coming together for my Toronto Summer, I discovered that there was an Australian Football League set up by a bunch of expats in Ontario, and that amazingly, there was a Toronto team who modelled themselves upon my beloved Hawks back home.

Now, as I am away right in the middle of the footy season, and given that my Hawks are doing quite well, I have been staying up at all hours listening to the matches over the internet from Australia. But there is nothing quite like seeing this style of sport in real life.

This weekend I know where the Toronto based Hawks are playing, and the time and travel ability is not too hard. Brilliant – I can feed my craving to see some Aussie rules, and stave off any pangs of homesickness a little longer!

I take the streetcar out to Humber College, and find the ground with the Aussie rule goal posts, and make my way to the little stand to watch. It is so refreshing to hear a cluster of random Aussie nicknames and accents!!

After a much needed sleep in, I visit a friend from work who has been mentioning some features of her neighbourhood that she thought I should visit. She shows me her apartment before we go to sample a well known ice cream parlour just a block away, for which people queue out the door and down the street. The sorbet choices I make are delicious and the cone selection is like something out of Wonka’s!

We then walk through one of the pockets of parkland that seem to be scattered all around Toronto, and find Casa Loma. This is a castle built by an entrepreneurial family in the 1900s, who incidentally brought street lights to the streets of the city, but who tragically had to give the castle up after some financial issues.

Walking alongside the castle ground, we are treated to amazing views of the city, with the iconic CN Tower the feature – a sight I never tire of and am always looking for wherever I am in the city.

Tash finishes off her summer Master’s course in Toronto at the end of August. Then she’s headed back home to Melbourne via New York City and the US Open, to finish her course and save for her next travel adventure – which will include India in February/March of 2013. Check out Tash’s travel adventures at Jouljet.