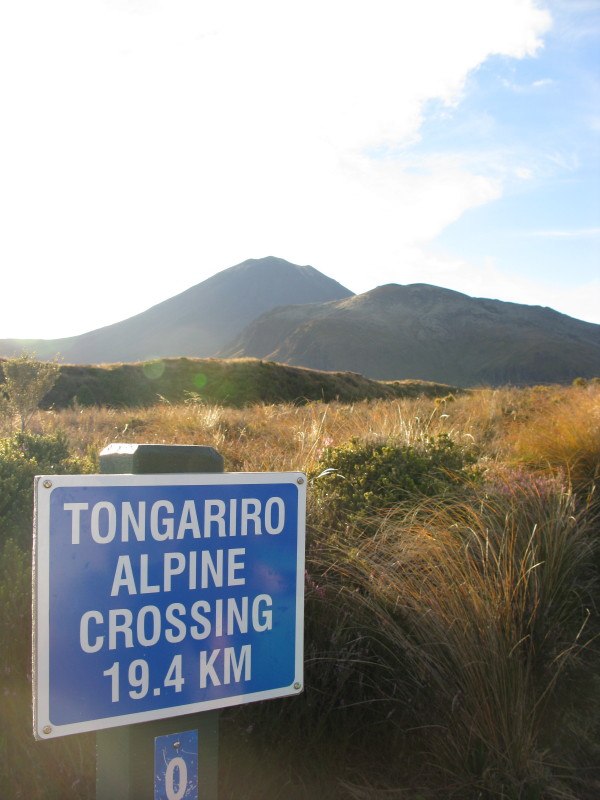 Shortly after I arrived in New Zealand, a number of people who knew of my passion for hiking and mountaineering told me it was worth my while to hike the 19km Tongariro Alpine Crossing – one of the best day hikes in New Zealand.
Yup. They were right.

This post was originally published in 2010, and has since been updated for accuracy of links and content.

The Tongariro crossing has been described as the best one-day hike in New Zealand for ages, but has gained a whole new pilgrimage since Lord of the Rings came out. The reason? This hike takes you through the heart of “Mordor”, passing by “Mount Doom” (and climbing up it, if you’re feeling energetic enough to add 2-3 hours to your day for the side track to the summit). And no, it’s not called Mount Doom in real life.

Although there was a certain appeal for me to see the desolate landscapes of “Mordor” in person, I’m not enough of a Lord of the Rings fan to have gone out of my way to do this hike for that reason alone. Instead it was the volcanic mountainous landscape, the long trek, and the promise of epic views that lured me in. Tongariro National Park wasn’t on the way to anywhere for me – I made it a dedicated trip and prayed that the weather would cooperate for the one day window I had available.

The Tongariro weather wasn’t looking too good leading up to the trek either. The park had been closed all week due to high winds and snow (yes, snow) in some parts. Because of the steep exposure on some parts of the hike, as well as the high altitude, weather plays a big part in how the day goes. As with any mountainous environment, a sunny day can turn into a blizzard at any time of year, and hikers must be prepared.

Make sure to check the weather reports before you make your arrangements! Here’s the best Tongariro Alpine Crossing weather site. You can double-check the results here. (Can’t be too careful when it comes to Tongariro crossing weather!)

So despite a week of foul weather leading up to my trip, I persevered in the hopes that the weather would break in time for my only available hiking day.

Where to Start Your Tongariro Alpine Crossing Adventure

The major launching point for the Tongariro Crossing is Taupo, a pretty town on a huge lake bearing the same name in the centre of the North Island of New Zealand. Even so, Taupo isn’t all that close to the start of the hike (which is located in Tongariro National Park). To get there, you catch a bus at the crack of dawn (before dawn, actually), and spend the next hour and a half waking up and considering your fate with a host of other travelers in the same boat (er…bus).

Alternatively, you can stay in Turangi the night prior, which is only 20 minutes from Tongariro park, but also has fewer amenities.

Check out these accommodation deals near the Tongariro Crossing here!

The evening prior, I befriended a girl from Holland who was staying at the same hostel as I. I discovered we were destined for the same fate when I overheard her wondering aloud if she would hear her alarm and awake in time to catch the bus. We vowed to wake each other up if we weren’t both up and eating breakfast by 5:45am.

But that wasn’t necessary; come the next morning we found each other in the dark kitchen with a few other travelers who were up for the trek, bleary-eyed and stumbling around. Needless to say the bus ride wasn’t exactly an uproarious one, despite it being packed with travelers from around town who were all committing their day to this hike.

Despite numerous warnings to have ample clothing, food, and water available, many of the hikers I saw on the bus had little more than what they were wearing (which in some cases was shorts and t-shirts) and a small bag with water and (maybe) a lunch. By comparison my bag stuffed with provisions and extra layers looked out of place, but with my experience in the mountains, I know to play it safe.

After being dropped off with about a million other hikers, my new friend (Sam) and I began the trek. Initially it felt less like the vast expanses of Mordor and more like a donkey trail given the stream of hikers in front of and behind us. People periodically stepped aside to get the perfect shot of the beautiful sunrise over the mountains, trying hard to ensure that nobody was in the shot, ironically, as if this place was their own secret. (And yes, I am guilty as charged – evidence below).

We later learned that April is the shoulder season for the trek, and that it actually wasn’t as busy as it could be. Tongariro Expeditions – the company that shuttled us to and from the park – takes 100,000 people each year into Tongariro National Park for this hike, and they’re not even the only operator in the region.

The hike itself started fairly easily while we all got used to the terrain, before we tackled the aptly named “Devil’s Staircase”. This separated the fit from the not-so-fit, as some people literally sprinted up the never-ending switchbacks and rocky stairs, while others took breaks every few minutes. Hacking away in the thin cool air and laughing at our own breathlessness, Sam and I made it to the top with only a few short breaks.

This is where the suckers for punishment could tackle the side-track to the summit of Mount Ngauruhoe (pronounced nah-ruh-ho-ee), aka “Mount Doom”. Although I’m sure the views from the top were splendid, we were already above the clouds, and had surpassed the designated time to begin the ascent (and still make it down and finish the hike in time to catch the last bus out of the park).

So instead we persevered on the Tongariro Crossing itself, walking clear across massive volcanic craters, past Mount Tongariro (another side track that takes about an hour and a half to summit and return), around volcanic cones, and between peaks and lakes. The grade was ever-upwards, and at times required some hands-on scrambling with steep exposure on both sides.

About three hours into the trek (after the worst of the climb was over and we had descended into and out of the “Red Crater”), we were hit in the face by an invisible brick wall; one that reeked of rotten eggs. Taking only shallow breaths to avoid the overpowering smell, I recognized it from other geothermic sites (including White Island), and knew that there was some serious geothermic activity taking place just below our feet. This smell stayed with us through much of the afternoon.

After a lunch stop at the aptly named (and beautiful) “Emerald Lakes”, we continued on the rest of our hike, enjoying the rolling terrain. We passed steamy sulphur springs, and watched as the landscape gradually became greener and lusher, until we finally descended into the humid forest.

We emerged the other side of this 19km hike a little worse for wear but generally pleased with our time of six hours (minus an hour for lunch and a number of breaks along the way).

When we got back on the bus, our egos were more than a little bit deflated when we learned that the record Tongariro crossing time (including an extra few kilometers to/from a lower parking lot) is an hour and forty-five minutes. It was surely accomplished by the likes of one of the people we saw running – literally running – past us with nothing but spandex and camelbacks on.

How Difficult is the Tongariro Alpine Crossing?

Tongariro Alpine Crossing difficulty: For us regular folk, the Tongariro Crossing is a long day, but not an overly strenuous trek. It requires endurance, a solid stomach (for some of the steeper drops on an especially windy day), and a few extra layers, as it can get cold at altitude. And although you can do the walk in running shoes, I was grateful for my hiking boots, which made some of the scree-filled descents into various craters much easier to accomplish while remaining upright.

Best Time of Year for the Tongariro Crossing

You can hike the Tongariro Alpine Crossing at any time of year, but you can’t do it without a guide (and crampons and ice axes) in the wintertime, and you can’t do it without massive crowds in the summertime. Hence my recommendation is to attempt the Crossing in the spring and autumn seasons; my stamp of approval for this idea was sealed by the increased number of locals who were there as well – avoiding both the summer crowds and winter chills.

Have a look at this video that tells so much more than what 1,400 or so words can!