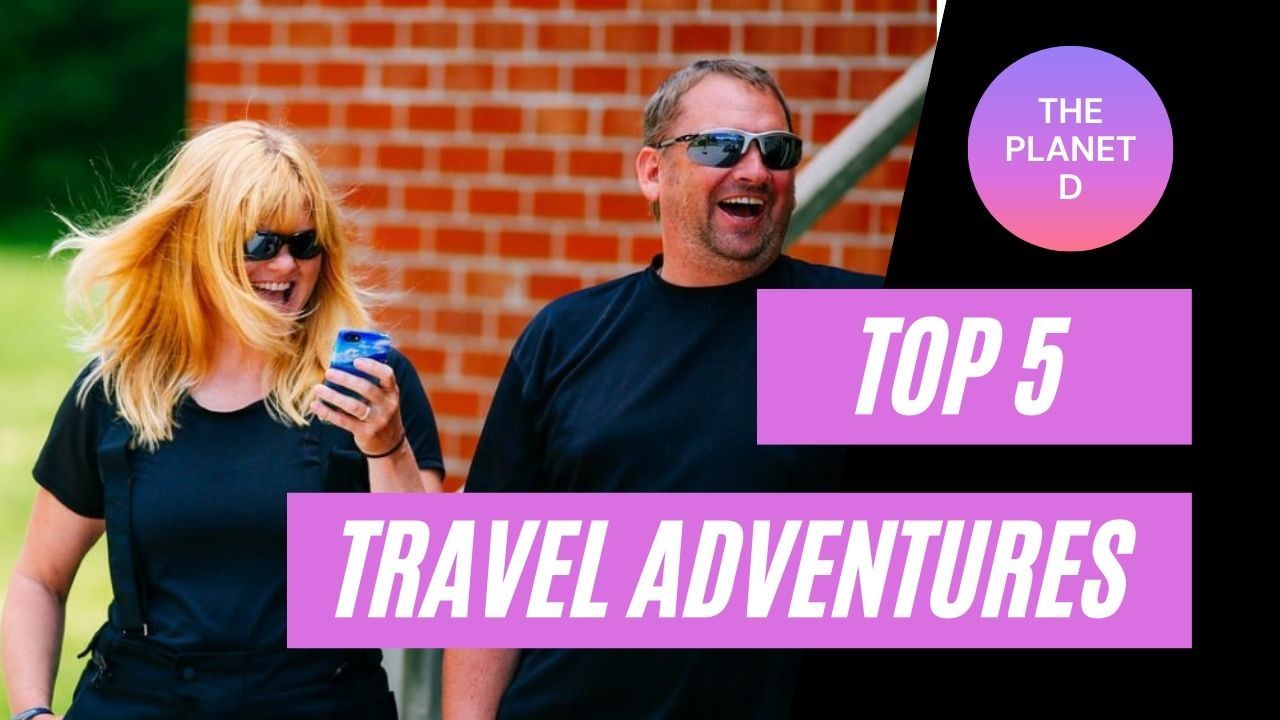 The Planet D is a leading travel website run by the infamous “Dave and Deb” (Dave Bouskill and Debra Corbeil); a Canadian couple who believes that Adventure is for Everyone. They’ve traveled to 115 countries on all seven continents over the past 13 years or so. In this article (and video interview) they share their top 5 travel adventures with me – and let me tell you, they’re doozies!

Who is The Planet D?

Dave Bouskill and Debra Corbeil have a few past lives prior to their travel lifestyle and career; the last career they both had was in the film industry. For anybody who isn’t familiar with the inner workings of the film industry, it’s an entirely immersive lifestyle that tends to preclude anything outside of work for the time that you’re working on a set – and the seasons/films often take many months to shoot. As such, if you’re into the whole scene, it’s a life unto itself. If you crave something else, it’s a prison sentence. And at some point for Dave and Deb, their career morphed from an enriching lifestyle to encroaching on their freedom and passion. And their passion – was to travel.

So travel they did. They quit their jobs, sold the lot, and embraced adventure. And boy oh boy – this couple doesn’t do anything in small measures. Their first travel adventure was the longest cycling race in the world, from the tip to toe of Africa…and they committed to it with zero distance cycling experience!

It’s through this travel adventure that I met Dave and Deb (online at first); I published a week-in-the-life of their experience of the Tour D’Afrique on my site in 2009!

The Tour D’Afrique was only the beginning of what became a long string of travel adventures, including a fairly lengthy stint of full-time travel.

Watch Dave and Deb Talk About Their Top 5 Travel Adventures (and Much More)!

Enjoy this chat I had with the founders of The Planet D, discussing not only their top 5 travel adventures, but also what it’s like to travel as a couple, building a blog while traveling full-time, post-pandemic travel and remote work, and more.

Dave and Deb worked on building their travel blog as soon as they started traveling in 2009, which was still considered the early days of the travel blogging industry (as in, travel blogs being anything more than glorified online journals).

But they had a vision, and that vision paid off (in spades). They invested in their business right away, and in ways that (at the time) were very uncommon. I met them because they contacted me to advertise their Tour D’Afrique expedition on my site. In fact, theirs was one of the first advertising placements I negotiated!

Their investment didn’t stop there. With a tv show in mind, they hired a publicist who earned them the moniker of “Canada’s Adventure Couple”. They did multiple tv spots, landed interviews in papers and online, and increased their profile exponentially at a time when competition was fairly low.

So they quickly made a name for themselves, and have since been recognized by Forbes Magazine, the Society of American Travel Writers (SATW), and USA Today to name just a few.

So they have a lot of experience in treating a travel blog as a business, the art of blogging simultaneously to traveling full-time (which ain’t easy), and in the interview they impart some solid advice to aspiring bloggers.

We also discuss the state remote work around the world, with some work-travel advice for remote workers who wish to take their gigs on the road.

See also: How to Start a Travel Blog

Meeting the King of Bhutan

Their top 5 travel adventures started off with a bang in our interview, with their trip to Bhutan, where they just happened to run into the king; a handsome chill guy donning ray bans who reduced Deb to a starstruck chatty cathy.

But their Bhutan adventures were about much more than meeting the king, and they shared some of the (many) reasons to visit, and why the $250/day spending requirement isn’t nearly as steep as it may seem.

Next up, we smushed two travel adventures into one, describing and comparing climbing Kilimanjaro to the trek to Everest Base Camp. Turns out each one is very different, and depending on the type of traveler you are, one might appeal more than the other.

This one came out of left field in terms of travel adventures, and while they both admit it was one of the hardest things they’ve ever (like, ever!) done, they’re also glad they did it. It put words like “comfort” into a much broader context of relativity, and also helped them gain immense respect for the traders who historically used this route in the very same way.

The Mongol Rally is a colourful 10,000 mile race from England to Mongolia in an incredibly (and intentionally) inappropriate vehicle. Dave and Deb did it with Sherry Ott (who you may recall I interviewed last month). It’s an annual event that carries on today, hosted by an organization called The Adventurists, who describe it as “motoring stupidity on a global scale”.

After describing the adventure to me in our interview, I put my hat in the ring to join them in a possible reenactment of it next year. Let’s see what happens!

As mentioned earlier, the Tour D’Afrique kicked off Dave and Deb’s travel lifestyle and career back in 2009. They talked about how, weeks into the race feeling like losers for being the last to ride into camp every day, they realized they were among the very few racers who were actually cycling EFI, known as “Every Fabulous – or whatever F-word you wish to use – Inch”! Most of the other racers hopped on the supported transportation each afternoon. Dave won the EFI award, and Deb won the in the women’s category for time.

So The Planet D’s travel careers started by winning the longest cycling race on earth. No wonder they are a force of nature in the travel industry. Their bubbly personalities, high energy, and positive attitudes that you see in their videos aren’t put on – they’re really like that, and every time I’m in their presence, I feel energized and inspired.

I encourage you to check out their videos as well as these top 5 adventures below, as well as the dozens of other adventures on their website. Just about everything they’ve done is replicable, because like they say: Adventure is for Everyone.

Tour D’Afrique: The Trip That Changed Our Lives

Mongol Rally: Gear You Need, and Preparing For the Mongol Rally (with links to their other Mongol Rally articles at the end) (Watch their video here)

Adventures in Bhutan: 18 Things to Do in Bhutan: A Comprehensive Guide of What Not to Miss  (video here)