Playing With Poppy the Wombat 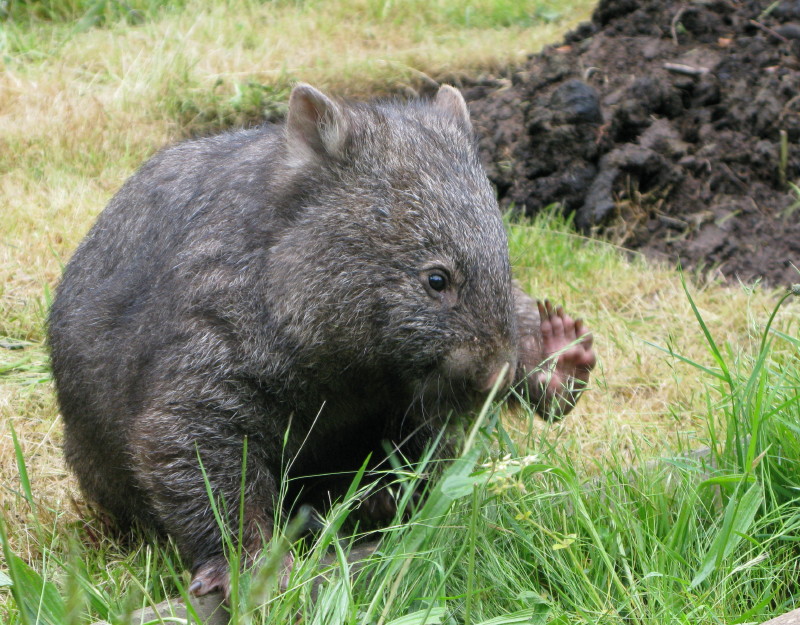 A wombat is once such specimen of Australian wildlife that many people don’t have a chance to become acquainted with, other than to have the misfortune to see strewn on the pavement as road kill or even to send to wombat-heaven themselves with their speedy cars.

Poppy the wombat is an orphan, whose mum became road kill herself. Luckily the driver stopped and checked the pouch of the freshly killed wombat, and discovered Poppy, injured but alive, suckling inside. She was taken to Kingbilli for rehabilitation, and it is here that she is creating her home and learning how to be a wombat.

Because of her extensive injuries, Poppy had to be doped up on opium for the first leg of her recovery (hence her name). She ultimately made a full recovery, was raised from her infancy, and is now living freely in her own digs (literally – wombats are burrowing creatures) as an adolescent wombat.

Wombats remind me of giant teddy bears, except with buck teeth and long digging claws that you don’t want to get in the way of. Their burrows are extensively huge and intricate, as they create interconnected underground passageways, some of which are quite complex. They can’t see or hear very well at all, and so if you downwind of a wombat and stay quiet, you can get quite close.

We don’t have to worry about trying to get close to Poppy – she regularly tries to help us while gardening. Hearing and sensing our footsteps near her burrow, she eagerly climbs out and trots over to us, happily plunking down right between our feet. Wherever we walk, we are sure to have Poppy underfoot as she follows us loyally. Since wombats can’t see much beyond one meter, they stick very close to their parents, and since Poppy is an orphan, our feet are good enough parents for her affectionate ways.

As you can imagine, it can be a little frustrating whilst swinging a pick axe to have a wombat step in the way, so we occasionally have to persuade her to move away. Pick her up (she’s heavy but not as heavy as wombats can get – 40kg), and she will lay back in your arms in absolute wombat-ecstasy while you rub her tummy. It is a sight to behold, truly.

I only wish more people could have a chance to get to know wombats as we have, and not to view them as cumbersome, overpopulated, overbearing, and a hazard to speeding drivers. For now, just take my word on it – and check out this video for a laugh.