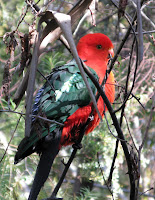 Local Australians tend to view the copious King Parrots with varying degrees of enthusiasm or converse nonchalance. Some people are quite interested to observe them when they land on a stair banister close by. Others don’t even bother to give them a second glance.

Either way, nobody can deny that King Parrots are gorgeous birds – the males with red heads and beaks and brilliant bright green stripes highlighting their dark green wings, and the females with iridescent shades of red and green covering their bodies.

Similar to Rosellas, which are also brilliantly colourful birds, the abundance of rainbow colours in many Aussie birds are anomalies and welcome deviations from our somewhat drab Canadian repertoire of feathered friends.

We are used to seeing the likes of cockatoos and parrots as pets in large cages, owned by 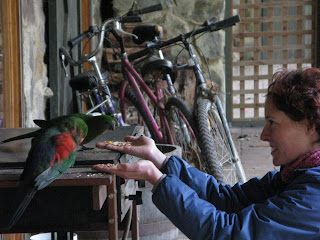 somewhat eccentric people. Here in Australia, they all fly free. (And although I have previously owned birds myself, seeing these large creatures unfold their wings and take to the skies makes me feel somewhat sorry for their captive cousins).

Click here to listen to the amazing sounds of Australian birds.

Interestingly though, wild King Parrots tend to have a tame side to them that is eerily reminiscent of their caged Canadian friends. We have a collection of about eight parrots that live just outside our front door. They frequent the hanging bird feeder that sits outside, regardless of whether or not food is there. And with minimal training, I now have them (literally) eating out of the palm of my hand. The next step is to have them tame enough to sit on my arm – a commonly achieved goal of anybody here who has the patience to work with parrots.

Since King Parrots are so easily tamed, many locals surmise that parrots as a species are naturally tame. In actual fact, they’re just really smart. It doesn’t take a rocket scientist of a wild parrot to eventually link humans to food, and to realize that people are generally not a threat. Similar to Ravens, which have been credited with the admirable capability of deductive reasoning (a quality that many fellow humans seem to be somewhat lacking in!), our parrot friends are quick learners.

So although we have no desire to cage our colourful flying friends, we are enjoying their company and songs, observing their animated interactions with one another, and are learning to develop a relationship with each of them. The more you learn about birds, the more you realize that the phrase “bird brain” doesn’t give these creatures half the credit they deserve.