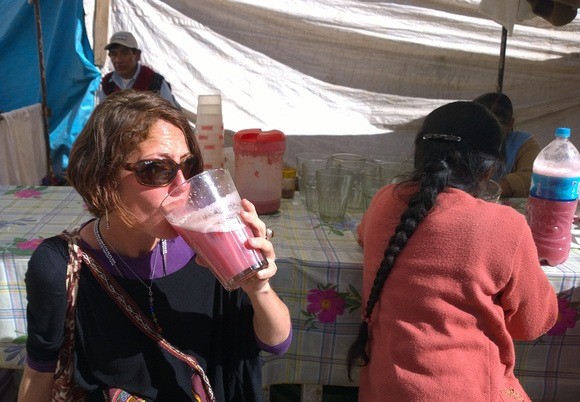 You don’t have to go far before finding an opportunity to drink chicha in Peru; on street corners, in people’s homes-turned-establishments, and in markets. And drinking chicha can be quite the cultural experience.

This article was originally published in 2015, and has since been updated for accuracy of links and content.

In the Andes of Peru, there are a few staple foods, namely corn (maize) and potatoes. Potatoes come in hundreds (yes, hundreds) of different varieties, and the most common type of corn is far from your average peaches ‘n’ cream – the kernels are massive (and thus more fibrous). It’s not as flavourful, but with time, I’ve acquired a taste for the local corn in Peru.

Making use of one of these staple foods, chicha is a drink made from corn. It’s popular not only in Peru but in many parts of Central and South America.

The non-alcoholic version of chicha is called chicha morada, which is made from purple corn. Seasoned with cinnamon and cloves and brewed to be very sweet, it’s a delicious drink that is slightly reminiscent of mulled cider.

Even more common than chicha morada is the alcoholic version which is made from fermented corn (the yellow kind), and is consumed en masse by the locals.

Technically, “chicha” is a word used in the Andes for almost any homemade fermented drink, using different grains or fruits depending on the area. You might find a street vendor selling three types of chicha: one made from quinoa, one with maize, and another one made from maize and infused with strawberries (a Cusco specialty, called fruitillada).

And although I finally took the plunge by trying the fruitillada variety, I also learned that chicha is an acquired taste (which I haven’t entirely acquired).

To traditionally make chicha, the fermentation process used to be (and probably still is in some places) activated by saliva; women chew the corn before spitting it into a bucket for fermentation and adding other personal touches. Whether or not the chicha I tried was of the saliva variety (and despite the strawberry infusion), I found it difficult to get down.

Chicha is generally a family affair, and Peruvians will convert patio corners of their homes into (unlicensed) businesses to sell chicha. You know you’ve stumbled onto a “chicheria” if you see a broomstick pole angled above a darkened doorway and topped with (often red) plastic bags, flowers, ribbons, or baskets. Step inside, and let the cultural experience begin.

For 1 sole (about 30 cents), you’ll be served a giant 1/2 litre glass of the brew of your choice, and second servings are on the house. I watched men and women alike down their glass in an alarmingly short space of time, ponying up for seconds before I even made it through a few sips of my own intimidatingly large glass.

And whenever you get people together in the spirit of camaraderie lubricated by alcohol, you’re bound to have an interesting cultural experience. I’m not a big drinker, but when I was in Panama I must admit my biggest cultural lessons were derived from drinking with locals.

Would you try drinking chicha?

14 thoughts on “Drinking Chicha in Peru”