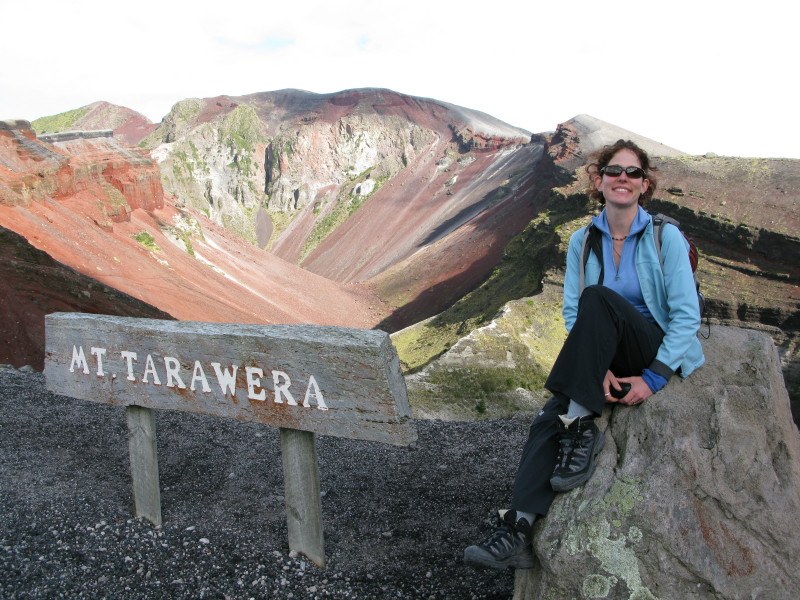 “We’re going to WHAT?!” a fellow hiker said in disbelief when we looked at the massive volcanic crater of Mount Tarawera that we would shortly descend into – and back out of – in the next few hours. I could hardly believe my own eyes, but you know me: I’m always up for an adventure.

During my multiple visits and lengthy stays in Rotorua, New Zealand, Mount Tarawera’s large flat-topped presence continually beckoned to me from the horizon. This formidable volcano with a violent history is a distinguished part of the Rotorua landscape. So I was over the moon when I was given a chance to do some crater walking on Mount Tarawera.

New Zealand is a very active volcanic zone, as evidenced by White Island – New Zealand’s most active volcano, just off the coast. But you don’t have to leave the mainland to feel the presence of volcanic activity, past and present. Rotorua’s steaming sulphur pools and geysers give you the feeling that the ground could open up and swallow you at any given moment (before logic and good sense kick in and you realize the earth’s crust is a little heartier than that).

And Mount Tarawera, about 50kms out of the city, reminds you to be respectful of how mighty the earth can be. In 1886, it erupted with incredible violence, creating a column of ash and steam 11kms high, killing 153 people, and burying three villages with 20 metres of mud and ash.

I hitched a ride with Mt Tarawera New Zealand; the only company with the rights to drive up to the crater, over 1,100 metres above sea level. There are some companies that land by helicopter at the crater’s edge, but I preferred the chance to do a hike around the crater.

Our merry band of six (including two guides) parked just beyond the base camp, after driving through endless layers of fog and rain. In fact, we had all resolved ourselves to a damp walk with no views, so we were thrilled when we discovered that after 20 minutes of driving uphill on a rough track, we had actually driven above the clouds.

After hiking up to the crater’s edge, we were rewarded with views of all of Tarawera’s peaks and craters, as well as the peaks of some distant volcanoes poking above the clouds.

“Okay,” said Jude, one of our two guides. “We can do a few different walks from here. The first follows the crater rim along here, a short rock climb up that ridge, then up to the Tarawera summit over there,” she said as she pointed to the highest peak on the other side of the crater.

“Then, we follow the crater rim on the other side, and descend into the crater over there,” she said as she pointed to a visible trail on the opposite side of the crater that looked insurmountably vertical.

“And of course, what goes down, must come up, so we’ll come back up and out the other side.” Jude finished off. By this point, all our jaws had dropped in disbelief that this hike was even possible, much less that Jude could be as casual about it as she was. Even I – avid hiker and mountaineer that I am – felt those familiar butterflies in my stomach that were indicative of my feeling challenged.

Then came the clincher. “There’s no going back once we start the hike, so we all have to agree on the route and stick to it. We’ve got an hour and a half to do it.”

We paused, waiting for Jude to propose a Plan B, which never came. “So…are you ready?”

We continued to stand there in disbelief. “It’s really quite a doable hike. Believe me!”

It was when we turned to our other guide, an affable gentleman on the verge of his 80th birthday (who looked not a day over 65) who was retying his hiking boot laces and had already admitted that he does this hike – twice daily, that we realized there was no Plan B. If he could do it – then by golly we could too.

Surprisingly, the terrain was fairly easy going. Despite the incline, the footing was solid, as volcanic rock is quite “sticky” for lack of a better term. After few brief stops for huffs and puffs, we were upon the “rock climb”. This part was a fairly easy scramble for somebody with mountaineering experience, and a fun challenge for those who were newbies. But everybody made it up without much ado.

Now, we were following the crater rim up a gentle slope to Tarawera’s summit. I had been warned about the part to come – something that can be quite fearful for some people, but which I was excited to experience: sheer drop-offs on both sides. The trail was about one metre wide, and looking on either side revealed a sheer drop of at least 500 metres. Our group was hearty – we even stopped in the middle of this section to enjoy the views; no vertigo here.

Upon reaching the Tarawera summit we were back in the clouds, but elated to be at the top. Pictures were taken and congratulations given all around. But our inevitable descent into the crater was yet to come, so we didn’t dally for too long.

“Scree” is a term for small loose rocks that usually make up the terrain on steep inclines in mountainous environments. In my experience in the Rocky Mountains of Canada, scree is made of sharp limestone, which is quite slippery and difficult to navigate.

The best way to get down a scree hill is to do some “scree skiing”, which is a loose term for sliding down the hill on your feet under the guise of having some general control. In my own experience scree skiing in the Rockies, I’ve been known to trigger landslides, so I had some apprehensions about what lay ahead.

But on a small hill that made for our practice run, I was pleased to discover that the stickiness of the volcanic rock made for an entirely controllable scree skiing experience. In fact, instead of sliding out of control as I’m used to, we could actually “walk” down the hill, each step sliding up to half a metre before burying our feet in the sticky scree.

Before we knew it, we were all on the bottom of the crater with huge smiles on our faces and rocks filling our shoes, surrounded by peaks on all sides, and wishing the hill had lasted longer. We stopped to (literally) dump the rocks out of our shoes and boots, before continuing on the (somewhat) gentle incline up and out of the crater.

Amazingly an hour and a half later, we emerged from our hike, exhilarated and slightly exhausted. Looking back at the terrain we covered, I had trouble believing we did it in the time that we did, without even feeling particularly rushed.

After a stop at Mt Tarawera Base Camp on the way out to write some notes in the guest book and get our certificates of achievement, we hopped in the Land Cruiser and descended down the rough track back into the clouds and fog. Although the rain and dense fog didn’t lift that day, we counted ourselves lucky to have seen the sun – and all that it shone on at Mount Tarawera.

Please check out this video of my Tarawera experiences, complete with evidence of the scree skiing and sheer drops!

Editor’s note: Mt Tarawera New Zealand provided me with a complimentary tour. They have since ceased operating these tours, as Mt. Tawarera is no longer accessible by the public.

This post was originally published in 2010; is has since been updated for accuracy of links and content.