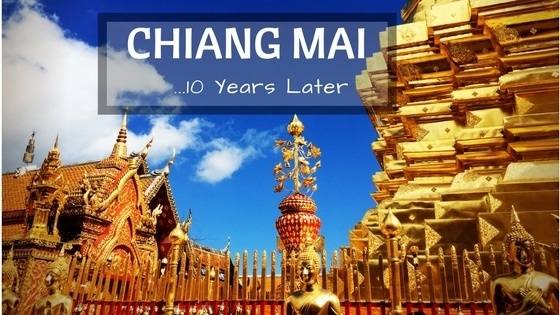 I wandered the narrow streets of the old city of Chiang Mai, knowing full well that chances were I’d never find him, yet reminding myself that stranger things have happened. Everything felt so familiar. I remember that restaurant! I can’t believe I actually know where I am right now. Oh my – this is the street where my guesthouse was! And holy moly: it’s still there! It hasn’t changed one bit.

Visiting Chiang Mai Thailand was a full-circle experience for me. After visiting so many Asian countries new to my repertoire in 2017, I eagerly anticipated a poetic return to Chiang Mai, 10 years after my first visit. To my amazement, some things were exactly the same. Unsurprisingly, it had also changed drastically.

10 years ago, I stayed in the old city of Chiang Mai. Nimman (more on this neighbourhood in another post) probably didn’t even exist at the time. If it did, it wasn’t for visitors.

10 years ago, Thailand was my first Asian country in my full-time travel repertoire (I toured China with a ballet in 1993, but that’s another story).

10 years ago, I was traveling with my partner at the time; somebody who embarked on the full-time travel lifestyle with me, but with whom I broke up in Australia. (See also: My Sordid Attempts at Finding Love on the Road)

10 years ago, we accidentally started an international NGO to assist the survivors of Cyclone Nargis, which all but obliterated neighbouring Burma (Myanmar). What hatched as a modest plan to rent a truck, fill it with drinking water, and drive it to the border where an aid worker could pick it up, quickly exploded into the assistance of the Royal Thai Air Force and a C130 Hercules cargo aircraft that we couldn’t possibly fill on our own. (Hence, a three-week fundraising initiative that damn near killed us). Here’s the news story that was produced about us in the midst of our efforts to stay sane:

10 years ago, our fundraising efforts wouldn’t have been possible without the assistance (and later, friendship) of TJ: our Thai angel who ran the internet cafe around the corner from our guesthouse. He was so touched by what we were doing, that he gave us unmitigated access to his internet cafe, and he drove us around Chiang Mai to Rotary meetings (where we fostered awareness and made essential logistical connections), acted as our translator, cultural buffer, and most importantly, he was our friend. We came to know his wife, little daughter, and college friend very well, despite linguistic and cultural differences.

10 years ago, after wrapping up our fundraising efforts (at the expense of our ability to see the southern islands of Thailand as planned), my partner at the time got dengue fever, and we spent another week in Thailand in the hospital while he fought for his life and I fought the insurance company for assistance in paying the medical expenses, extending our expiring visas, and rescheduling our onward travel plans to Singapore.

A lot happened for me in Chiang Mai, 10 years ago.

10 years later, I had about a dozen Asian countries notched into my travel bedpost. I was with a different partner (with whom I reunited in Chiang Mai after six months apart due to lifestyle/career differences). We stayed in a different neighbourhood, foreign in every sense to the Thailand I visited 10 years ago, yet steps away from the places I recognized as if time hadn’t passed.

Before arriving, I could barely remember the Chiang Mai of old. (10 years and a few dozen countries of travel memories will do that to you). I recalled an “old city” that was surrounded by a moat, which I easily identified on a map. I didn’t remember exactly where in the old city I stayed; my memories of Chiang Mai consisted mostly of short snippets of visual and visceral “recordings”, like well-worn clippings from home videos that lacked context.

I remembered a white hospital (where my partner battled dengue fever for a week), and 10 flights of stairs that I regularly descended while going out to get takeaway food for us at the brownstone mall around the corner. I had no idea where in the city this was.

But sure enough, in the taxi from the airport to the hotel 10 years later, I recognized it as we passed by, and then immediately doubted myself. That’s it….that’s the hospital! No it’s not, Nora. You’re creating memories that serve your current circumstances, in search of something familiar. I’m sure all hospitals look the same. But when we rounded the corner and I saw a multi-tiered brownstone shopping centre (called Central Mall), I knew I wasn’t fooling myself. I had been here before.

Still, I wasn’t in Chiang Mai to recapture old memories. I did, however, have a quiet mission to find TJ again. A mission I knew would be close to impossible – which made it all the more alluring. Stranger things have happened.

TJ (a nickname he conjured up because he figured his Thai name would be impossible for us to pronounce) ran an internet cafe, 10 years ago when I knew him. His wife had a small store selling kitschy keychains, pencil cases, and other random bits and bobs adorned with colourful Hello Kitty-like illustrations. I only visited her store once, buried somewhere in a mall I don’t recall, which would be impossible to re-locate. My only hope was to find the neighbourhood I stayed in 10 years ago, and wander the streets in hopes of finding TJ’s internet cafe.

Problem was, in 2017, internet cafes weren’t exactly on every street corner any more. And I had no information about TJ beyond his (fake) name and some video clips and pictures of his cafe, none of which were encompassing enough to help me (or anybody else) identify the place. But I remained cautiously optimistic that the Universe would sprinkle some fairy dust on my mission and somehow a magical reunion would be made possible.

My first wander of the old city was a dud. Thinking I had stayed somewhere in the southwest quadrant of the city, I weaved the streets methodically, stretching to recall something. Occasionally I had a sense of déjà vu, but nothing stuck.

Through the process of elimination, I determined that 10 years ago I stayed in the southeast quadrant. Finding myself in the neighbourhood one day, I suddenly recognized a temple. Memories came flooding back. I absolutely irrefutably knew where I was!

And also, kind of not.

Despite knowing the temple like I’d visited it just last week, I couldn’t exactly place it in my mental jigsaw puzzle of this former Chiang Mai neighbourhood. But my onward wanders were rewarded with more familiarity. Hard to believe the crappy corner restaurant could still be a crappy corner restaurant 10 years later, like it hadn’t aged a day. While many aspects of the old city of Chiang Mai had changed, just enough remained the same for me to get my bearings.

I found myself walking down a street I knew very well. I knew it was the street where TJ’s cafe was. I knew it would be on the right. I just didn’t know where.

Suddenly, I turned to look down a nondescript alley/narrow road. “That’s my guesthouse,” I said, matter of factly. I hadn’t remembered the name prior to seeing the sign, the very same sign 10 years later, that read “Julie Guesthouse”. Still not sure of myself, I walked down the alley to peek into the reception area, which had not changed one single bit. I wasn’t deluding myself; this was it.

But it also meant that I had walked by the place where TJ’s cafe should have been. It wasn’t there.

Funny. I’d even stopped outside a travel agency that had similar dimensions (and was that the same wallpaper, even?) to TJ’s cafe. My inner pragmatist knew his internet cafe had long since been repurposed, and yet I remained hopeful that he had evolved with it; turned it into a co-working space, perhaps, or a copy centre, or one of the few bastions of internet cafes that still remained.

Another sweep of the street confirmed this, replete with peeking into every shop on the off-chance that TJ was still in the area, just doing something different, and that I would recognize him.

My remaining romanticized hope was that perhaps TJ had become an Uber driver, and that we would serendipitously hop in his car one day. (Didn’t happen).

My apologies if you thought this would be one of those (fairy) tales where the heroine finds her knight in shining armour again against all odds. I really hoped I would find TJ again; stranger things have happened. We would have hugged, reminisced about old times, and caught up on new adventures.

But of course, TJ had moved on, as had Chiang Mai. It had gone from being a little city into a much bigger one; the second largest city in Thailand in fact. This is something that became abundantly clear to me over my two months in Nimman; a neighbourhood I’m not sure even existed when I last visited.

I’ve no doubt that TJ is doing well. Entrepreneurs through and through, I suspect that he and his wife have jumped on a new wave and are riding it into the sunset, while raising their daughter. Although she’s not yet of university age, perhaps I’ll return to Chiang Mai in another five years, and find her hanging out in Nimman, at her parents’ trendy coffee shop, where finally, I’ll get my fairy tale reunion with TJ.