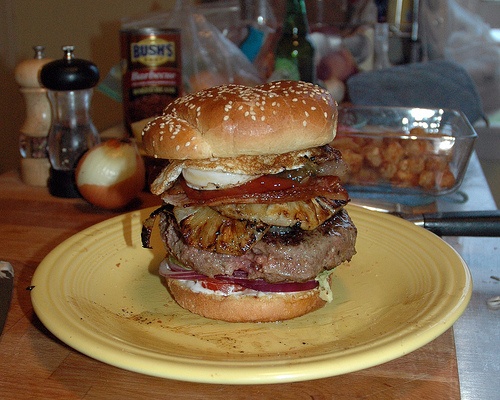 As I was inhaling another of many Australian hamburgers the other day, I realized I was eating a burger that nobody in North America (and other places for that matter) had ever seen the likes of.

In explaining to some folks at home in Canada how Australians prefer to eat their burgers, the awed silence on the other end of the line was indicative of just how unique these burgers are.

Which made me realize that in addition to Australian hamburgers, there are a number of foodstuffs (mmmm…food: one of my favourite topics) that are relatively unique to this spot in the world, which are worth sharing.

Australian Hamburgers: “With The Lot”

First of all, the burgers. Australian hamburgers here are called a “Burger With The Lot”. At home in Canada we call it “the works”; here, it is “the lot”.

And so it should go by a different name, because the toppings are also completely different.

“The lot” in Australia is lettuce, mayo, sliced beetroot, sliced pineapple, a fried egg, bacon, and a dash of tomato or barbecue sauce.

Variations on this theme are rampant, but those are the basic delectable ingredients. And if you think pineapple or beetroot is strange, try it.  (shudder, mouth watering, shakes starting)

An Australian baked good that I learned about in Cairns, Lamingtons are pretty delicious. Basically it is a sponge cake covered on all sides with a thin layer of chocolate icing (variations on this theme include strawberry icing), and dusted in shredded coconut.  (shudder, sugar fit, shakes deepening)

No trip to Australia is complete without savouring their delicious meat pies. This single serving pie is a typical lunch or snack for many an Aussie (and at about $3 it won’t break the bank), as they can be purchased warm from most bakeries (another common – and welcome – Australian phenomenon).

A typical meat pie filling is a fairly plain minced beef mixture, but most bakeries have no less than five different varieties of pies. My favourites to date include chicken & leek, lamb & rosemary, and veggie pasties (similar to meat pies). Mini quiches also tend to reside with the pies and pasties: spinach and cheese by far being my favourite.  (shudder, fits of hunger-induced panic)

Originally I thought this was a typo. “They must mean Dim SUM,” I thought, thinking of the scrumptious Chinese dumplings that Aussies actually refer to as “Yum Cha”. But after seeing more and more “typos”, I realized that maybe they are referring to something different.

Dim Sims are available almost everywhere, from burger joints, to bakeries and even some convenience stores. They come typically deep fried, but are also increasingly available steamed as well.

And Dim Sims are actually quite similar to Dim Sum – they are meat dumplings in flour wrappers. The exact contents of the inside of a dim sim remain a mystery, as nobody has yet to be able to actually identify all the ingredients for me. It seems that a mixture of meat (pork and chicken being the most common and likely) with cabbage, “filler”, and spices are the closest approximation.

Although I am a huge fan of Dim SUM (known as Yum Cha here), Dim Sims surprisingly did not capture me the way I thought they would. The taste is generally bland, and there is an ingredient I can’t quite put my finger on that makes my mouth twist into odd shapes when I eat it. Each time I try one I figure it will be different – that the last one I tasted was off – but I always end up miserably choking it back by the end. Copious amounts of sauce makes said choking back a little more palatable. (shudder – just plain shudder)

This delicious dessert is common in Australia, and a staple on any dessert buffet table. Although you can get pre-made bases in the grocery store, I doubt they even come close to the deliciousness of a homemade version.

Pavlova is a meringue base – but not crunchy meringue; instead it has a crunchy crust, and a soft fluffy almost cheesecake-like texture inside. Top the base off with cream (and not the milk-like stuff you get in North America – real, thick, clog-your-arteries-with-joy cream) and fresh fruit like kiwi, strawberries, and passion fruit, and you have a dessert to write home about. (good thing I’m writing home about it)

Although lamb is not an Aussie-specific food, its popularity sure is. Lamb tends to be the meat of choice in Australia, and is a favourite at ever-popular Aussie BBQs. Although I was a fairweather fan of lamb prior to coming here (it tasted too gamey to me if it wasn’t drowned in mint sauce), I have certainly become enamoured with it here. It is tender, flavourful, and surprisingly bereft of the gamey taste. (mmmm….meat….stomach does back flips for joy)

Australia falls under British influence quite profoundly, especially in the realm of food. So, many things I have mentioned above may have roots in the UK – I don’t specifically know. Some of the delicious desserts rampant around Christmas time (eg: mince pies – shudder, salivate, fall into diabetic coma) provide an obvious link to “the homeland”, while others are interesting variations on international dishes.

The Dairy section of a grocery store is where I notice some of the biggest culinary differences. From sour cream that is almost as thick as butter and comes in a mini milk carton, to just plain cream – starting at a respectable 45% milk fat and available in varying degrees of thickness, I can spend hours puzzling over the variety of heart-attack-inducing dairy products available.

But I know I have only scratched the surface on foods that are characteristically Australian. Now you tell me: What have I missed?

42 thoughts on “Australian Hamburgers, Lamingtons, Meat Pies, and Other Foods”