A Week-In-The-Life of Inge: Volunteering in Costa Rica 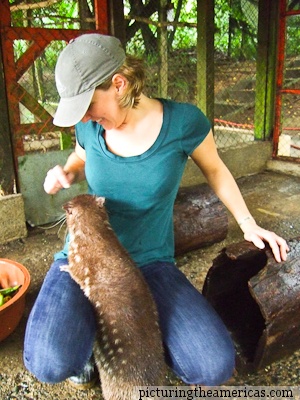 During a backpacking trip from Nicaragua through Guatemala to Mexico, Inge discovered her love for independent travel. You could always find her in small hostels, with guest families, and couchsurfing to connect with locals. She worked, lived, hiked, scuba dived, volunteered, and surfed through Central America. In 2008 she moved from Germany to New York City to explore big city life and North-America. Whenever there is a chance though she hops on a plane to her beloved Latin America. Here’s a week-in-the-life of Inge volunteering in Costa Rica at a Zoo.

After two days of travelling from NYC to Costa Rica I woke up in Hostel Cristal in Ciudad Quesada on a rainy Monday morning.

Got a baby blue teddy umbrella from one of the tiendas (shops) nearby and jumped into a cab. ‘Al Terminal – To the bus terminal’, I said, the driver nodded. After a couple of minutes driving, he asked where I would go today. ‘A La Marina – the Zoo’. We talked about the weather – mucha lluvia – sí sí.

The ride took quite long, and at some point it dawned on me that he had no intention to bring me to the Bus station but instead to the Marina. Back and forth discussion: Bus just going every 30 min…almost there anyway…would cost more to turn around and to catch a bus than to go to the Zoo directly. Darn. 3800 Colones was his special price.

Arrived at the Zoo just in time on Monday morning to start the volunteer job. Walked into lunch room and surprised Sam and A.J., volunteers from USA, who were putting on their rubber boots. The five zoo keepers were Ticos (that’s how the Costa Rican people call themselves) and spoke spanish.

They showed me where to put my stuff, and where to find rubber boots.

First job volunteering in Costa Rica was cleaning the lion cages with one of the zoo keepers. Tired lions in the outdoor area were barely looking up as we scrubbed the floor and rinsed lion poop out of their shelter.

Rosa, my host mum for this week, saved me from starving through the day with her quick delivery of rice, beans and plátano frito (fried plantain). Pura vida! Pure life! That’s what the Ticos say.

Re-energized I worked through my afternoon task of picking good bananas from a huge banana pile and storing them in large bags, watching out for snakes that use the banana mountain to hide in. Follow-on job was to cut bananas including peel into slices, two buckets were needed for hungry tapirs and monkeys.

Cleaned the sand-coloured walkways through the zoo, together with A.J. One of us scrubbed the path, the other one hosed it down.

Also cleaned the Agouti’s cage. Furry, curious dude with the size of a long cat. The Ticos call him Tepesquintle.

Fed the Kinkajoo, a funny nocturnal honeybear with long claws and large eyes, who was sitting in its house, a hollow branch of a tree.

Cut bushes to clean up the woods besides a path. Super hot weather, everybody was sweating in the large work gloves. ‘The bush’ was more a crazy jungle of plants that you usually see as well-behaved pot plants in living rooms.

Chaos broke out in the wild pigs’ cage as we unloaded the shrubs from our barrow; they had no issues with the spiky twines or tree branches. Everything was munched away in no time.

After dinner at my host family’s house, A.J. and Sam stopped by and brought another volunteer along. We met with an American guy who the girls knew from a bus tour. He had been living and volunteering in Costa Rica for 26 years, had a mysterious job and a parrot. It was a relaxed evening with beers and his many crazy stories. Life is good! Pura vida!

It was raining since midnight. A drizzling rain at first, swelled up to a downpour, hammering on the roof of my small room at my host family’s house. The teddy umbrella accompanied me to the Zoo in the morning.

News of the day was the escaped tapir which was running through the Zoo the whole night. After it was caught, the Zoo keepers had to repair a fence that was run down by the tapir.

We got blue rain pants, blue rain jacket and blue gloves to the rubber boots and helped clean around the big cats’ cages, picked up leaves from the walkways, brushed and washed the walls of the cat building from the outside for the rest of the day.

Signed up for ‘The Birds’, together with A.J.; a medley of amazon’s yelling and parakeets’ fuss welcomed us. About 20 parrots, each in its own cage, anxiously expected food. Noisy impatience! Some were tearing with their huge beaks on the batons of their cages.

Before goodies could be served though, the cages had to be cleaned. A.J. removed drawers as well as seed and water cups from each cage and I hosed everything down with lots of water in a large sink.

‘Hurry up, we’re starving’, the parrots were hammering against whatever makes noise. So we worked quickly, re-assembled the cages and distributed seeds and fruits. Appreciative silence.

We climbed in the aviaries with plenty of tiny, colourful birds to deliver the seeds of the day. Last but not least, the majestic Aras (macaw) that patrol the sky above the Zoo got their lunch, served via a cable winch to a platform in breezy height.

An old, sick cow was brought in by a farmer. The Zookeepers were going to slaughter the cow and asked us volunteers if anyone wanted to help. Sam immediately said ‘count me in’, the others said almost instantly ‘No way!’ and I discussed with myself, curiosity vs. protection against sleepless nights. I decided against it and instead listened to Sam’s colourful narration after she came back from the bloody task.

Everybody helped clean the wide tapir compound: collecting stones and fallen branches and piling them up. The goose was not happy about our invasion but the tapir got curious after a while. A tapir looks like dark brown giant pig with long legs, a big butt and a prehensile snout.

‘If those guys are already here, they’d better start tickling my ears’, it thought, and laid its head to the side and came closer and closer. Everybody caressed and petted the cute tapir which revealed its cuddly, cat-like character.

We left the Zoo early to catch the bus to La Fortuna for the weekend.

My first rafting tour with the girls and a bigger group of travelers. Loved it and will be looking out for more white water. For lunch we snacked on watermelon and pineapple, prepared by the tour guides.

My volunteer companions took the bus back to the Zoo. And I started looking for new adventures. I found two nice guys who did a private canyoning tour with me. Helmet on, harness around my hips, I rappelled down an impressively high waterfall. Slippery stones underneath my trekking sandals. Pura vida!

Inge will be traveling along the East Coast on the hunt for good kite spots this summer. She plans to visit Projecto Mosaico in Nicaragua this year. Follow her adventures on Picturing The Americas.

5 thoughts on “A Week-In-The-Life of Inge: Volunteering in Costa Rica”