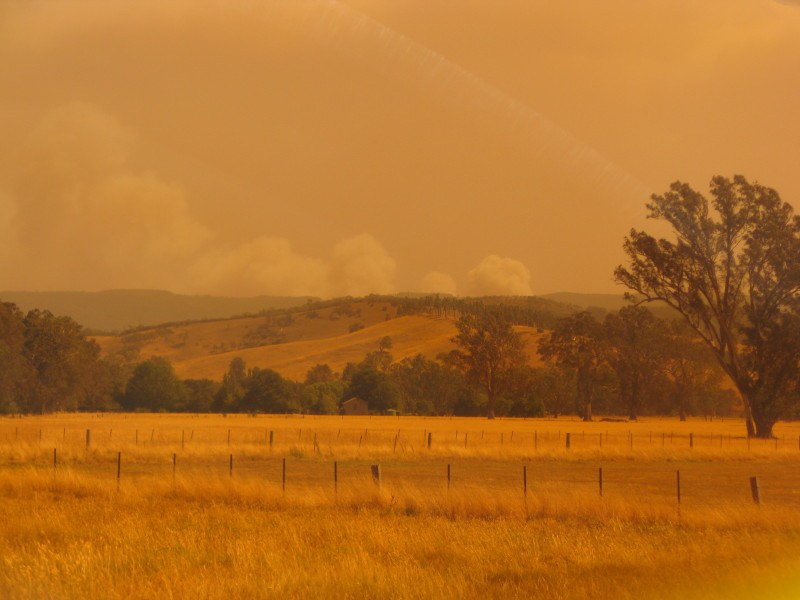 This post about being amid the Australian bushfire of 2009 was originally published in 2009. It has since been updated for accuracy of links and content.

Happy Valentine’s Day! Love is in the air….or is that smoke?

The situation at the relief donations warehouse is out of control. We receive countless truckloads of generous donations, and despite requests to the contrary, lots of it is still used. Gently used clothing is one thing; bleach stained and tattered rags are quite another. People who have lost everything from the fires may have no physical possessions, but they still have their dignity. I wonder who is really being served by some of these donations; the people receiving the goods, or the people cleaning out their closets.

Oh yeah, and today sometime apparently we will be receiving a truck load of hay, and….cattle. Although the donor is incredibly generous and we are appreciative, I’m not entirely sure it was entirely thought through. How does a farmer who has a property that is nothing but scorched ground feed the cattle? Ah well, I think these are nice problems to have in the grander scheme of things.

We thankfully get the day off from volunteering at the warehouse tomorrow, and decide go back to Taggerty. Tomorrow we will see our place at Rubicon, which is apparently still standing but is far from being out of the danger zone. It will be nice to gather up the last of our belongings that we would hate to lose if the place burned.

It is a different world in Taggerty. The CFA (Country Fire Association, a brigade of volunteer fire fighters) hall, which formerly housed two lonely pumper trucks is now a hub for strike teams; a hive of constant activity. There are no less than 50 firefighters milling about when we drive by. And this is in addition to the 600 firefighters based in Alexandra.

The above pictures are of Taggerty, before (left) the big fires hit, and after (right) a week of living in Australian Bushfire smoke. The tree on the right is the same tree in both pictures. No filter has been used.

The smoke is thick and full, and yet a small group of eight of us manage to sit on a porch and enjoy some semblance of normality – a few beers and a few laughs. Initially, it is hard to know what to talk about, especially with people who are on the fire lines, fighting every day. You figure they will want to forget about it, but is has also become our lives; fire consumes us (literally and figuratively). It feels almost irresponsible not to talk about it, especially after not having seen each other in over a week. There is so much we want to know too, having been somewhat sheltered from it in Alexandra; I guess everything we need to know will be revealed in due course.

As I go to bed, I can really see how different a world it is here. In Alexandra, especially at the relief donations warehouse, we see a lot of the big picture with regards to recovery and relief; looking days, weeks, and even months down the road. In Taggerty by contrast, it is all about the immediate area and the fires. Both views are entirely justified, and you can’t have one without the other.

But between the two lies a huge chasm of mis-understanding and mis-communication. A guy actually told Kelly “I don’t know how somebody able-bodied like you can sit in Alexandra and do nothing.” I almost punched the guy. Instead, we invited him to visit the warehouse(s) and reconsider that comment. Truly though – it simply serves as proof that life is different down here in Taggerty. I am not yet convinced that I like it. Emotions run high and the small-town politics are cut-throat.

The clash of aid organizations is ugly. Somebody summed it up nicely when they said that Aussies hate the “Tall Poppy” (a reference to “Tall Poppy Syndrome”, where people/poppies who rise above others are cut down to size). But if there is a chance in a situation like this to be the hero and save people (especially in the realm of providing aid), everybody wants the part, tall poppy or not.

The politics in some small towns is disgusting…to the extent that the distribution of supplies is being thwarted because one or two people who want to be the heroes. They prevent certain channels from helping, all for their own selfish desires to be the ones to provide. We have seen this happen in situations ranging from corporate aid organizations down to regular people simply volunteering their time. It is these “heroes”, some of whom aren’t acknowledging what we have at our fingertips at the relief warehouse, who are making continued appeals to the mass public for supplies…supplies that eventually end up at the warehouse(!) and that can no longer even be accommodated.

I had hoped that a crisis like this would bring people together; instead it seems to be driving people into staunch camps against one another.