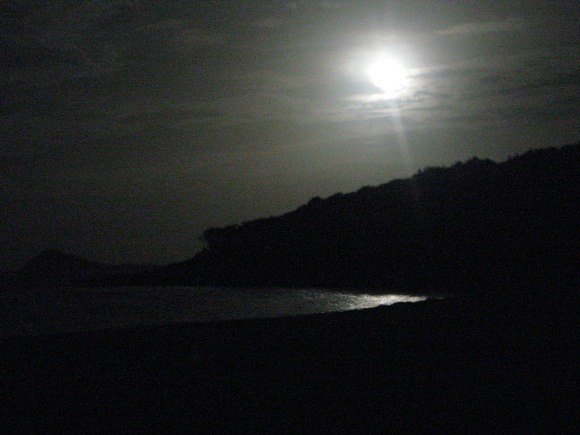 I don’t know what sound I thought turtles would make while laying dozens of eggs in a deep hole they just laboured over on the beach, but it wasn’t what I expected.

“Phooooooooo,” the Leatherback female turtle sitting inches from my face “said” (or rather, grunted) as she arched her head back with the strain that had spanned almost an hour of laying so far.

Down at “the business end” of things, a researcher was catching the eggs as they were being laid, her hand strategically placed, ready for “the pitch” while another researcher held up the turtle’s tail for a better view of the action.

Despite the long sighs and grunts of strain coming from the turtle, she seemed impervious to our presence – all 10 of us turtle-watchers, hovering around in awe and trying (largely unsuccessfully – at least on my part) to get good pictures without using a flash.

But the volunteers at SPECTO (St Patrick’s Eco-Conservation Tourism Organisation) know what they’re doing so the turtles can indeed go about their business. A permit is required to access Levera beach (in northern Grenada), so they can control the environment and conserve this key nesting site for endangered Leatherback turtles. Volunteer researchers are on the beach every night between April and July from 8pm-6am, tagging turtles, monitoring nests, and (in this case) relocating eggs being laid too close to the ocean to somewhere with a better chance of survival.

Although it was moving to see and be near these large ancient creatures, I wasn’t as bold-over as I guess I had expected I might be. In researching volunteer work-trade gigs a few years ago, I came across a turtle conservation centre in Cost Rica that I’ve always kept in the back of my mind as a work-trade possibility in case I was “in the area”.

But I’m not sure I had considered the late nights and slow pace. There’s a lot of sitting around. A lot. In the sand. Which gets into everything. (I’m just saying).

But to a turtle-enthusiast, this could well be a religious experience. Learning about and getting so close to – even touching – an endangered creature like a Leatherback turtle is a unique and powerful thing. There were people on our tour who make a point of visiting places on vacation where turtle watching is available.

My moment of connection came when the turtle grunted. I suddenly related to these gentle slow-moving creatures, empathetically understanding my sister creature’s belaboured sigh of effort in laying all those eggs (not that I’ve laid any eggs recently, but you know. That’s why they call it empathy).

“ Phooooooooo”: that tangible, undeniable sign that not everything in life is easy, and the odds aren’t always in our favour, but it doesn’t mean it’s not worth the effort.

If you plan on doing a turtle watching tour in Grenada, be aware that Levera Beach is on the northeast coast of Grenada (and most people stay in the southwest). It’s a very long twisty drive, which can be problematic if you’re prone to motion sickness (as some people in our tour group were). Also, expect it to be a very late night, since the the real turtle-business doesn’t kick off until well after sunset.

Many thanks to the Grenada Tourism Board  for this turtle-watching opportunity. I was delighted for the experience.