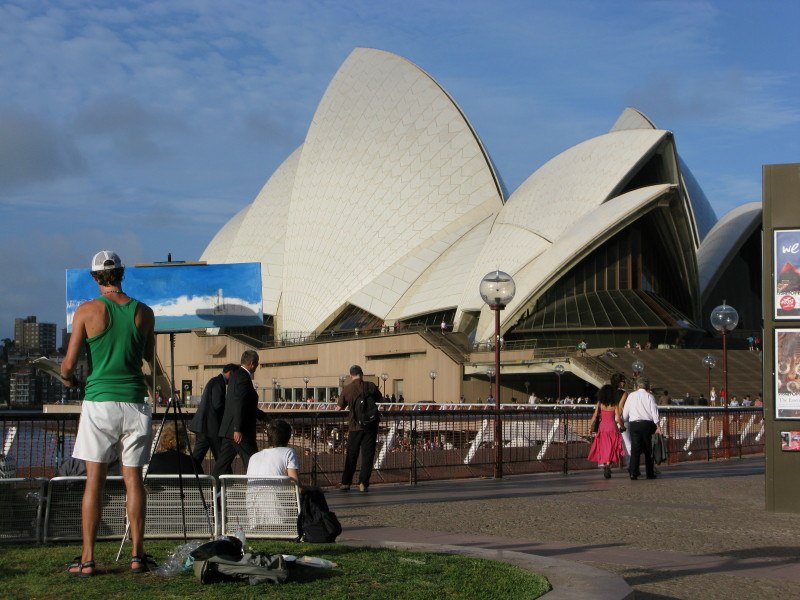 If you want a comprehensive guide to seeing Sydney Australia, this post is not going to be very fulfilling. But if you would like to enjoy some random observations from Sydney and tips I have from roaming the streets of Sydney for almost a week, then please, feel free to continue reading. (I’m pretty sure it will be mildly amusing, regardless of educational content).

Disclaimers aside, Sydney has been an interesting trip so far. After meeting up with a colleague of mine in Melbourne for an iced mocha to die for and engaging conversation that could have lasted for days (thanks again, Frank!), I hopped on the overnight train to Sydney – an 11 hour journey.

Upon arrival in Sydney, I roamed the streets randomly and discovered the following:

Sydney people (Sydnites? Sydneyers? Sydcentrics?) love to run. Even if they’re not decked out in the latest fashionable running gear, you don’t go far before seeing somebody running. As yet I haven’t seen anybody chasing these people, so I must infer that they’re either in one heck of a hurry, or they’re just very fitness conscious.

King’s Cross is a section of the city that is popular for backpackers who like to party. Most Aussies I’ve come across have told me to stay away from it like the plague as it’s also considered to be the ugly underbelly of the city, so I didn’t stay there. However, I did walk through the area, and found it to have equal parts luxury and sleeze. Heroin addicts twitch outside fancy gated residences beside tattoo parlors across from fancy cafes beneath cheap backpacker hostels.

Wooloomooloo is quite possibly the most enjoyable word to say, and has more “o”s than any word I’ve seen before.

Sydney downtown (known as the CBD – central business district – in Aussie-speak) traffic reminds me of Toronto. This is not a compliment. I lost years of my life in Toronto traffic.

The Royal Botanic Gardens are free to browse through, walking on the grass is encouraged, and it has some of the best views of the city.

Shoot a flying fox, and somebody may shoot you. (I am, of course, referring to shooting with cameras, not guns). While wandering through the Royal Botanic Gardens, I got a whiff of something familiar. Eventually it clicked – I was smelling bat poo. This reminded me fondly of our time in Evans Head when we camped under a few thousand of them. So while I was busy shooting these furry vampires, I had the distinct feeling of being watched. I reeled around to see a professional video camera on a tripod looking suspiciously right at me. I didn’t have the presence of mind to either take a picture of them shooting me (which would have been humourous if nothing else), nor ask what they were shooting. Don’t ask me why – maybe I was stricken with an uncharacteristic bout of shyness.

Speaking of uncharacteristic shyness, I was told by a fellow traveler in my dorm room that when she met me I was so extroverted I made her flinch. Maybe next time I’ll say “hello” with a little less gusto.

It will cost you $200 to do the Sydney Harbour Bridge climb, which allows you to precariously teeter to the very top of the arch of the bridge. Or, for $0, you can just walk across the bridge on the footpath. If that’s not enough to get your heart racing, then just walk closer to the edge. (This advice is courtesy of Rachel from England. Thanks! I think this is particularly sound advice that could be applied in other areas of life. Not getting your kicks? Walk closer to the edge.)

I’m now staying near Sydney with my friends from the Black Queen who I met in Lightning Ridge shortly after we first arrived in Australia. Future adventurous posts will include the long (and wet) Manly Scenic Walk, how to catch a bus (or rather, how not to catch one), and other adventures. Stay tuned!