Surviving Paradise: One Year on a Disappearing Island [Book Review] 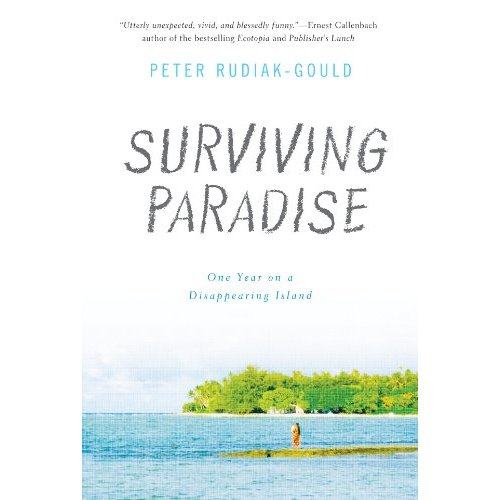 I was given a free copy of Surviving Paradise: One Year on a Disappearing Island

for review, and I’m very thankful for it. I love travelogues in general, and this one is written absolutely beautifully and strikes a few chords within me. Read on to learn more about Surviving Paradise and my reaction to it.

At the ripe age of 21, Peter Rudiak-Gould landed on Ujae, a remote atoll in the Marshall Islands that is 70 miles (by plane no less) from the nearest telephone, car, store, or tourist, and 2,000 miles from the closest continent. He turned to face a sea of 450 unsmiling brown faces who made up his Marshallese community for a year, while he taught English to the island’s school kids.

Peter’s integration to this new life is simultaneously hilarious and painful. Not remotely being what he expected, the learning curve was huge, and life was far from the exotic tropical paradise he had envisioned.

For starters, he immediately discovered that the last volunteer who had been there was much better than him. This was something the locals reminded him of multiple times a day, plaguing him with merciless comparisons.

He mused at his state of sanity in dreaming up this scheme to live on a faraway island for a year:

Despite his multi-faceted learning curve, Peter adapted to life on Ujae. He became fluent in their language, learned to fish (not very well by Marshallese standards mind you!), and painstakingly tried to teach the island’s children some English. His skin darkened a few thousand shades and his hair lightened the same. But as much as he integrated, he also realized something pretty important: that he is still Western.

“I had always fancied that I wasn’t, that I had somehow escaped the influence of my upbringing and emerged free-thinking and unburdened by cultural baggage. How wrong I was. I was Western – deeply and terminally so. I carried my civilization with me at every moment: my nervous efficiency, my emotional openness, my sense of individual entitlement, my war against the status quo….Living in another country had finally made me realize how much I was a product of my own country”.

How true! Don’t we as travelers tend to identify more with our upbringing and culture once we are removed from it? I can only imagine how stark this realization would have been living as culturally remote as Peter was.

Peter discussed what it is to live in a country that is technically part of the United States, but at the same time is so far from it – both geographically and culturally. This hasn’t been helped by the fact that the Marshall Islands (Bikini Island in particular) was the major site of nuclear testing during the Cold War. The United States’ ongoing mismanagement of this little piece of “paradise” so far from the homeland was apparent to Peter:

“..Critics saw garbage piles and thought ‘irreversible devastation!’ when they should have thought ‘solid-waste management problem.’ They saw makeshift shelters and thought ‘abysmal deprivation!’ when they should have thought ‘housing shortage’. They mistook the country’s nuclear legacy for the obliteration of an entire nation, rather than the forced migration of several hundred people and the irradiation of several hundred others. These premature obituaries were based on a kind of cynical paternalism: the assumption that the Marshallese had no ability to solve problems or adapt to change. I had done my share of criticism too, but it was hard to reconcile these dreary descriptions with my own memories of men fishing on pristine reefs and women preparing for a feast.”

And towards the end, Peter painted a queer yet strangely familiar picture of the integration of American society into the old Marshallese ways:

“The people of Ujae ate instant ramen, but opened the package with a machete…They served Kool-Aid, but treated it like Perrier; at Spam, but savored it like filet mignon. They sipped their morning coffee, but sweetened as often as not with coconut sap. Some of the islanders could recite the medicinal properties of native plants and the hit singles of the Backstreet Boys with equal ease….it had been surreal to live here, with a people who were in equal parts hunter-gatherers and yuppies, in a place exactly halfway between jungle camp and New York City – a place where a man might spear fish for subsistence in the morning and play half-court basketball in the evening, a place where the same person who shared with you the ancient meaning of the colored lines on the back of a crab could also recite Snoop Dogg lyrics”.

There were other ways in which the customs and people of Ujae were entirely foreign to Peter too. I especially enjoyed how Marshallese society dictates that you’re never in too much of a rush to chat. As much as work needs to be done, the pace of Ujae island life was generally relaxing with regular conversations along the way.

While on the topic of men and women, I found myself wondering how different the volunteer and living experience on Ujae would have been if Peter had been female. Men and women in Marshallese society don’t commingle much, and their set daily tasks (as well as the quantity of work to be done by each gender) vary drastically, usually in favour of the men. Peter observed that the women were constantly working, with little apparent down-time. And nobody – male or female – truly understood the meaning of privacy on the island.

The book wended its ways into my thoughts and actions each day, while I followed Peter in his – at times – agonizing experiences and eventual cultural immersion (of sorts) to the Marshallese way of life.

I got right into the book and voraciously read the majority of it in a short time. I found myself giggling out loud at the humour and general semantic brilliance of various passages, reading paragraphs aloud to anybody who would listen. When I neared the end (as I tend to do with books I like), I slowed my pace so as to make it last as long as I could!

Although the book was written (at least in part) because the Marshall Islands disappearing due to global warming, it isn’t the primary focus of the book, as you might suspect given the title. Instead the theme of global warming is incredibly subtly hinted at throughout and formally introduced beautifully in the Epilogue, once the reader has already unwittingly fallen in love with both the author and the people of Ujae Island. Instead of the book being an environmental soap box as I had suspected, it was a true travelogue of Peter’s bizarre and enchanting experience on Ujae, with an environmental (and cultural) reality check at the end. And I believe that in presenting the environmental issues as he did instead of as a constant theme through the book, they will have a deeper impact on the readers. For that, and for so many other reasons too, I loved it.

Feel free to pick up a copy of Surviving Paradise: One Year on a Disappearing Island

and see for yourself.

(Editor’s Note: I received a free copy of the book for review, and there are affiliate links in this post.)

I don’t write a huge number of book reviews, but you can read the ones I have done here: Book Reviews

4 thoughts on “Surviving Paradise: One Year on a Disappearing Island [Book Review]”