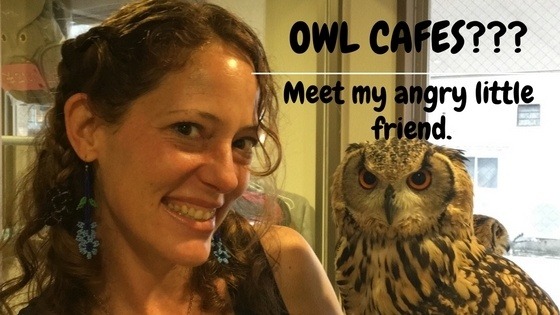 Years ago I decided I didn’t like zoos, and would generally avoid them. Animals in captivity make me sad. Which is why it’s actually a bit odd that in my frenzy to experience a sampling of Japan’s over-the-top-ness, I opted to see what owl cafes are about.

I thought it would be cool. I love birds. I’ve had birds as pets (though admittedly that was before I adopted my “zoos-are-bad” attitude). You might even say I am a bit of a bird whisperer.
So when I visited an owl cafe, I heard whispers: “this is not a happy place.”

These cafes were initially borne of the desire for busy Tokyoites to enjoy the company of “pets” without the associated responsibility. Many apartments don’t even allow pets, so something like a cat cafe serves a purpose. But as with many things in Tokyo – the land of the outlandish – it went a little too far. (See Also: Akihabara? No Thanks)

Not All Owl Cafes are the Same

Now, not all owl cafes are created equal. Some owl cafes, I later learned, allow the birds full freedom to move around the cafe at will, and/or don’t allow guests to touch them. This was not the case in the cafe I went to. Other cafes may allow petting but regulate it with compulsory “rest times” for the birds (which the cafe I went to may or may not have done). Although you might want nothing more than to snuggle up with an owl, I wonder if they’re simply best left to be admired.

So if you do want to visit an owl cafe in Tokyo (and really, after the whole Harry Potter thing, who can blame you), I suggest you choose carefully.

I read this about owl cafes in an article published on CNN:

It’s tempting to feel a pang of sadness for them — little lines of owl captives — but in reality they don’t look like they give two hoots about their situation.
“They’re imprinted on humans as soon as they hatch,” Yabe tells us. “Humans are the first thing they see so they grow up used to us.”

This is true. The owls I saw didn’t necessarily long for some other kind of life; they’re obviously quite accustomed to humans, and I could see they even had an endearing relationship with the staff at the cafe.

For a curated list of animal cafes in Tokyo that are as ethically run as possible, check out this post.

Before you berate me for even considering frequenting an owl cafe (as a bunch of people on Facebook and Google did), I urge you to consider the following. Fair warning: if you have pets you won’t like what I have to say.
If you’re going to get all up in arms about owl cafes, I’d suggest you have a closer look at the concept of domestication of animals as a whole.

Yes, this is an extreme argument. But I think it’s necessary to look at our own backyards before pointing a condemning finger at, for example, the owl cafe industry, and/or those who wish to frequent such cafes.

Where is the middle ground? Is there a truly ethical way to keep animals – any animals – in captivity, solely for our own pleasure or even therapy?

I like a cat or dog cuddle as much as the next person, and my house-sitting career is largely dependant on caring for other people’s critters. So I’m not trying to be hypocritical. I’m just putting both sides out there for consideration. You decide where you want to stand on the spectrum.

For me, I went to an owl cafe out of curiosity, and decided I wouldn’t return. But I wouldn’t hold a grudge against anybody else with the same level of curiosity if they were moved to go to one. Just like I don’t condemn people to go to zoos, or have pets. It’s all about choice.

Check out my own owl cafe experience. I start off very excited, but as you’ll see in the video, everything kind of turns for me, and I leave with a sour taste in my mouth (rightly or wrongly – it’s simply how I felt).