Canang Sari: The Ceremony of Life in Bali 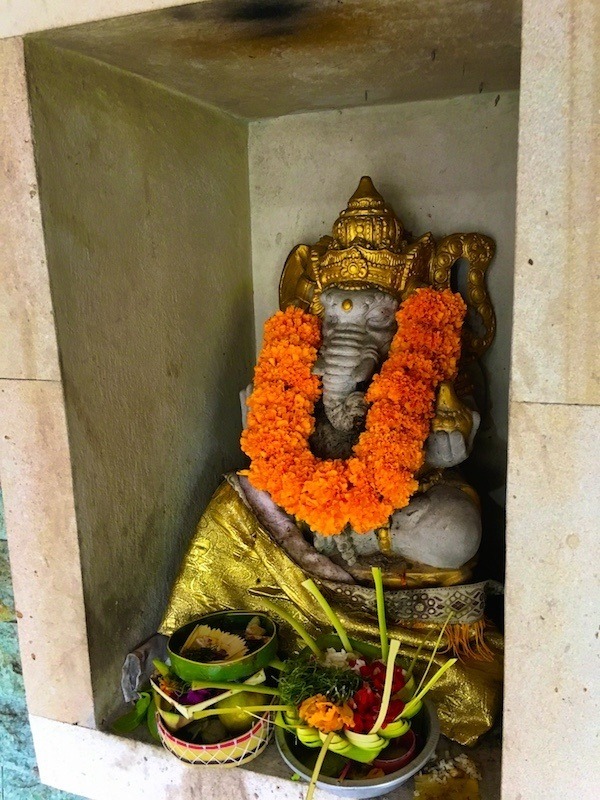 “Today is a good day in the Balinese calendar. I will be able to negotiate a good price for you,” wrote my friend Agnes, who was house-hunting for me prior to my (first) arrival in Bali. Little did I know to what degree Bali stands on ceremony (and they have their own busy calendar to organize it all), but I would soon watch, and learn. It all starts with Canang Sari.

My Introduction to Canang Sari

“Come back later, busy now” the shopkeeper said, somewhat curtly, while wearing a sarong, headscarf, and carrying a tray of what looked like flowers and incense.

I found another money changer, and stepped up to the window. The woman inside ignored me. She continued to ignore me for another 15 minutes, while I stood by and watched what I would later learn is a daily ritual Balinese ceremony called Canang Sari.

She held above her shoulder a round metal tray with burning incense and little palm leaf boats filled with colourful flowers and bits of rice, crackers, and candies. She strategically placed these little packets of joy around her place of business. With each placement, she dipped a frangipani flower in water and sprinkled the flower water around her offering. Taking great time and care, she continued the ritual until she had placed all her packets. Then she took off her sarong and belt (under which she was wearing pants) and with equal ceremony, folded them up and put them into a bag, which she stashed under her desk. She took a minute to gather herself, sit down, fix her hair, and then, eventually, still in no great hurry, she opened the window to attend to her first (bewildered and long-waiting) customer.

This being the first of many times I’d see Canang Sari in action, I had no idea what just happened, but I was surprised – pleasantly so, despite the inconvenience – that the performance of the Canang Sari ceremony superseded everything, even a waiting customer.

I later came to understand that the people of Bali prioritize their ceremonies over all else. And, that their calendar is full of ceremonies.

It is an offering of thanks and peace to the Hindu gods (85% of Balinese people are of the Balinese Hinduism persuasion). Much like spiritual rituals I’ve seen in other parts of the world, it hinges on the expression of gratitude not only for what we have, but also for what we want.

The components of Canang Sari are strategically chosen and precisely placed, according to the following basic directions and offerings to specific Hindu gods:

Canang Sari is performed for different reasons, by different people in the family, at different times of day, and places, and days.

A few years ago, a friend (who knew Bali well) told me about a Balinese ritual that involves a certain day of the year when people “bless” all their appliances. I realized I’d happened upon that day in Bali myself, when I came down to the kitchen to make my morning coffee and saw Canang Sari offerings on the fridge and stove. I left the villa and saw that every car and scooter had also been adorned with Canang Sari. Although I thought it was a strange practice when my friend described it, I loved it when I saw it in action. Why not?! Perhaps you might even get your microwave to last a little longer with this little spiritual boost.

During my first month in Bali while staying at a villa owned by a Balinese family that lived right in front, one thing was certain: around 10am every morning, the grandmother of the house would come into the compound all dressed up, with her silver tray full of Canang Sari, and she would leave these offerings in various spots around the property.

When I was chatting with her son (the landlord), he said he doesn’t feel right about his day until she makes this offering. It sets him up energetically for the day.

Although Balinese Hinduism is based on Hinduism from India and pays homage to various Hindu gods, there is also quiet attention paid to “spirits” of various natures (good, bad, and otherwise), and depending on who I talked to, I heard some mention of black magic.

Walk down the street and you’ll see Canang Sari on the sidewalks in front of businesses and temples everywhere. (Careful not to step on them! It’s bad luck). I had heard (but have been unable to substantiate with online research) that these ones left outside the front door are to distract bad spirits with candies and flowers so they don’t come inside. Other ones are left in equally strategic places to appease good spirits.

The villa landlord from my first month in Bali also shared with me some serious problems (such as a former illness of his, and even the death of his daughter) which he attributed to both past life bad karma, and black magic.

It left me feeling that Bali on the whole is a very spiritual – and mysterious – place; one that left me curious to learn more….and a bit scared at the same time. If anything, I was resolved not to piss anybody off and risk a spell coming my way.

One of the things that stood out for me in Bali was the degree to which ceremony dictates everything. And there is almost always a ceremony. A few days after I arrived, the temple near my villa received visitors all day and night, delivering and offering Canang Sari. The week after it was the temple further down the street, honouring another Hindu god. The week after that was a multi-day ceremony that involved staying up all night for successive nights.

Businesses open, close, and operate around ceremonies, which are the first priority in Balinese culture. In the same way the money-changers were unwilling to take my business until they’d completed Canang Sari for the day – even if it cost them a sale.

Canang Sari was one of many aspects of Bali that captured my heart and imagination. I loved how flowers are used, all the time. They’re liberally adorned on anything that needs beautifying, not the least of which are the prolific statues (some of which are also “dressed up” in their own sarongs).

Every day, the woman who ran the warung (local restaurant) near me lovingly changed the necklaces of bright orange flowers that each of the religious statues around the establishment wore. Even though the previous day’s flowers still looked lovely, it was only the best for these statues.

With such colours – a colourful Canang Sari, colourful sarongs, colourful flowers, and colourful people (inside and out), it’s no wonder that Bali attracts spiritual pilgrims from all over the world.