A Week-In-The-Life of Lisa and George: We Said Go Travel 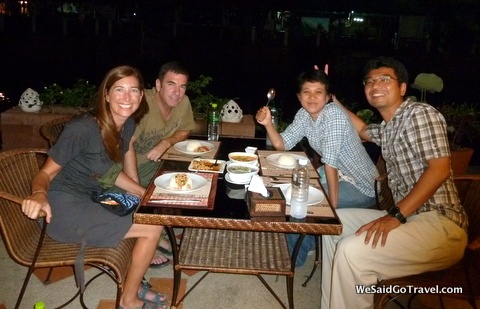 Lisa and George Rajna of We Said Go Travel met online in 2007 and started traveling together internationally almost immediately. By 2008, they had quit their jobs, rented their condo and left for a year on the road. After eleven countries, twelve months, losing sixty pounds and getting engaged underwater, they returned to Los Angeles. On July 1, 2012, their next year long adventure began with Indonesia, Thailand, Myanmar and now India. Please enjoy this week-in-the-life of Lisa and George of the website We Said Go Travel, in Thailand and India.

10am: Our fifth morning on the gorgeous Thai Island, Koh Samed, we continued our pattern of lazy beach days. We woke up late, wandered on the beach to Tok’s restaurant and ate some delicious Thai food such as Pad Sei Ew (Thai Noodles) or Panang Gai (Red Curry Chicken). George and I often shared two delicious dishes so we could savor a larger variety of Thai cuisine. After a walk on the beach, we then frolicked in the water and then walked along the beach again.

1pm: We stopped by the pier to buy tickets to return to Bangkok on Wednesday. We tried to buy the tickets yesterday but realized we were unsure of the date of our flight to India.

We typically do not plan even a few days in advance but recently, with high season was upon us, we had not gotten our first choice of hotel or transport prompting us to book ahead more often.

And we still haven’t forgotten our experience on Koh Samed four years ago when we were forced to spend a night under the stars at the Gekko Bar due to lack of accommodation; absolutely no rooms, tents or other lodging options were available during that three-day holiday weekend when a Full Moon party was in full swing.

10am: Keeping our website going requires time nearly every day. On the 1st and 3rd Tuesday of the month, I send out our newsletter sharing our travels. I also enjoy responding to comments posted on our site.

Noon: We shared more tranquil walks on the beach and took photos of us being content, our toes in the sand. I loved our 27 days in Myanmar (Burma) in October and time in the Northern Thailand in early November, but I truly loved dining with my toes in the sand. The only drawback: the mosquitos that bit me under the table during my candlelight dinner.

8pm: On our last night on the island after nearly a week, we purchased a mini hot air balloon. It was nearly time for the festival Loy Kratong and many people on the beach were sending up their wishes in the 100Baht balloons. We wanted to watch the holiday celebrations but by the next full moon we will already be in India. I considered extending our visa to stay in Thailand for the festival but in the end, we participated in our own small way on the beach together. They say that whatever you wish for as your balloon ascends will come true!

10am: For our final meal in Koh Samed, we had breakfast in town near the pier at Chili’s where we ate nearly four times during our week stay. I was sad to depart paradise but we had no idea what the day would bring including a bus ride from hell.

Noon: We walked to the pier and got onto the ferryboat that left at noon. The bus to Bangkok was supposed to depart at 1:30pm, but instead a van arrived and dropped us off at a roadside bus stand for a bus that was headed to Bangkok at 2:00pm.

3pm: There was a sudden noise and then clouds of smoke entered the bus. We had a flat tire. These buses have double wheels, so when the tire blew the driver did not lose control of the vehicle. Unfortunately, he had no spare tire. After twenty minutes, the bus limped along the road in search of a repair station. Another half an hour later, we sat by the side of the road waiting for a new tire to magically appear.

4pm: The next drama occurred when the bus driver backed the bus into the garage area and the rear driver’s wheel became stuck in the mud. The driver attached a metal chain from the bus front fender to the posterior of a truck that came to our aide. During the first attempt, the chain broke. Second and later attempts all ended in failure, the bus clearly deeper in the mud, leaning at a dangerous angle.

4:30pm: This was the hour we should have arrived in Bangkok. It was also when all the tourists abandoned the bus. For another 40Baht each, we were dropped off at a bus station and found a 5:30pm van going towards central Bangkok.

10pm: Between the van and the taxi to Amarin Inn, we arrived close to 10pm. Not every journey goes exactly how you plan it. However, the next day would be Thanksgiving in America and I felt grateful that no matter how long the bus ride took no one was injured.

10am: After a night at Amarin Inn (which we booked on Booking.com), we were somewhat refreshed and ready for our final day in Thailand. I had my hair colored by Muk for the third time on this trip at Nancy’s salon near Rambuttri Village Inn. On our first sabbatical year, I had my hair done once at Nancy’s salon in 2008. Later in the trip when I had my hair done in Mongolia, and I came home with hair that was so black and so ill. It took nearly a year to fix the color.

But this trip, I met Muk at the end of our first month in Thailand and returned after a month in Burma, and now again after yet another month in Thailand. We are off to India for potential a few months so I purchased a tube of my color as in India nearly everyone has dark black hair.

8pm: We met our friends, Nop and Ya, who live outside of Bangkok for dinner. We had met them at Inle Lake in Myanmar in October 2012. At Inle, we spent a lovely day touring the lake together by boat. It was wonderful to see them again even though Bangkok traffic was so congested that it took them nearly three hours to arrive to Banglamphu. We celebrated my article released in the Myanmar Times about the Phaung Daw Oo Festival in Inle Lake that we witnessed in person.

6:33am: We prepped for our flight from Bangkok to Kolkata, India. There was terrible traffic in Bangkok near our guesthouse. I believe we traveled less than ten kilometers in the first thirty minutes. We had ample time to get to the airport but the traffic was reminiscent of Los Angeles.

10:25am: Our Air Asia flight at 10:25am was delayed. We had prepaid for our bags and our lunch so checking-in was easy.

2:30pm: In India, we sailed through customs and immigration, changed money and prepaid for a taxi to the hotel we had found on Booking.com, Hotel Victerrase. The yellow cabs looked as if they were from a 1950’s movie set. The aging vehicle sputtered during a harrowing drive with horns trumpeting piercingly. These twenty frightening kilometers seemed like one hundred.

5:00pm: We wandered in the city marveling at the sounds of the horns, the incredible traffic and the street life with barbershops, restaurants and tea available on nearly every alley and corner.

10am: We explored Kolkata. The Victoria Memorial was at the top of our list but on the way there we stopped at Incredible India. There, we chatted with Sanjeev Devhowdury, a tourist information officer at Incredible India for over an hour. He was accommodating, giving us a a dozen maps and varied information about India. We discussed the tiger reserve, upcoming festivals as well as what should not be missed in Kolkata. Sanjeev gave us proper documentation to visit the Marble Palace, and informed us about the evening Sound and Light show at Victoria Monument.

Noon: We had lunch at the hotel and practiced our Hindi with the phrase book that Sanjeev gifted us.

2pm: We attempted to see Mother Teresa’s Mother House but it was closed from noon until 3pm as was the church across the street. We had a soda at Heaven Hotel until we could return to Mother Teresa’s sanctuary. We visited her tomb and the room she occupied during her last thirty years of life, a testament to persistence, passion and tenacity.

5:00pm: We walked to Victoria Memorial for the Sound and Light show. We attended the earlier 6:15pm show in Bengali, avoiding the English version at 7:00pm. Tickets ranged from 10 to 20Rp, the former being slightly further back seating. In this vast and crowded city, only twenty people attended the Saturday night showing.

10am: We met Javier, a cameraman from Venezuela at breakfast. He had just driven across India for two months with Rui Mendes for FOX Sports South America. After a brief Hindi lesson from our waiter, we paid the bill, a reasonable 200Rp or $4usd.

Noon: We hailed a taxi to Bagughat near Eden Garden to arrange transportation to Puri. We wandered around the bus station, speaking to several bus companies and finally found Dolphin Bus where we booked two sleeper berths for Monday night on the 9pm bus for 450Rp ($9usd) each.

2pm: Wandering the streets of Kolkata, we saw the GPO (General Post Office), the Writer’s Building and the High Court. Learning we were Jewish, a local unbolted the doors to the Moghen David Synagogue, appearing church-like from the exterior. We were informed that the Kolkata Jewish community was 30,000 strong until 1948 when most families immigrated to Israel.

4pm: We appreciated the Marble Palace tour but a no photo policy and an entrance guard’s attempt at bribery were not appreciated. The building was once a family’s home with their massive collection of art and sculpture.

7pm: We had a quiet dinner at our hotel. It was a “Dry Day” so the hotel bar and restaurant were nearly empty, quite unlike other nights.

Our time in Kolkata was nearly over but I was excited for adventures ahead at the Sea Beach Festival in Puri and the Dance and Sand Art Festivals in Konark near the UNESCO World Heritage Sun Temple. I cannot wait for the next few months in India!

Lisa and George are now in Nepal, and have a few more months of travel ahead of them on their Asian sabbatical year. Lisa Niver Rajna was recently in National Geographic Intelligent Traveler and on National Television on Career Day. She is a 2012 nominee for the Presidential Awards for Excellence in Math and Science Teaching, and a member of the Traveler’s Century Club for travelers who have been to over one hundred countries. Follow their travels at the website We Said Go Travel, on Twitter and on Facebook .

13 thoughts on “A Week-In-The-Life of Lisa and George: We Said Go Travel”