On The Rescue: Koalas Up Trees

Our first koala rescue comes as a surprise. At 5:30pm, Georgie (the young and beautiful owner of Kingbilli) knocks on our door.

“Any chance you guys would like to help me wrestle a koala out of a tree in Alexandra?” No sooner than the words are out of her mouth are our dinner plans put on hold, our shoes are on, and we are piling eagerly into her car.

This post was originally published in 2008. It has since been updated for accuracy of links and content.
See also: Camping With Koalas at Cape Otway

Koalas are not particularly active in this area until the summer, and as such, we haven’t really seen one yet. So the opportunity to help rescue one is just too good to pass up.

Now Koalas in trees aren’t usually bad things; that’s where they live. Look for well-concealed blobs in tall eucalyptus trees, and you’re probably looking at a koala. But a koala in the middle of a city/town, surrounded by yards full of dogs, and curious people who try to capture or feed the koalas (and feed them improper foods that tend to kill them rather than help) spells trouble. The biggest threat are the dogs, foxes, and other ground-dwelling creatures that will attack the koala when it climbs down the tree and move across the ground to other trees. So a koala spending time in urban areas is a ticking time bomb. Hence – the need to rescue it!

As dusk is settling in, we arrive in Alexandra and begin our koala chase. With the help of some bystanders, we are quickly able to locate it, and chase it up a tree. Chasing it up a tree isn’t exactly the preferred result, as we consequently have to go up the tree after it, but that’s how it ends up going.

Kelly & I, feeling more like dead weight than the rescue-helpers we envision ourselves to be, stand at the base of a mean looking tree with blankets and cages as Georgie adeptly climbs it. Her intention is to aggravate the koala enough so it comes down the tree, at which point either I expertly convince it to jump directly into the cage (right), or Kelly expertly throws a blanket over its head and picks it up under the arms (right).

“The idea is not to let it get away and up another tree,” Georgie says with a knack for the obvious. Although it is valuable information, it only serves to make us feel even further out of our element and stressed about not letting a pissed off koala get away.

As an aside, let’s talk about koalas for a minute. Although Georgie loves working with them, she likens them to grumpy old men. With brains that are literally the size of a pea, they aren’t very smart animals, and so everything they do is very simple and obvious. You almost always know what they want and how they’re feeling. There really isn’t much of anything going on behind those little beady eyes. No really. Nothing.

They eat eucalyptus leaves, which are actually poisonous, so Georgie figures with all the toxins in their systems, they can’t afford to be too smart. When she goes to feed them in captivity, she says they basically throw open the door, glare at her, grumpily say “where’s me pudding!” and slam the door again.

One day, a koala Georgie had been working with for about three months was leisurely taking its meal from her hand, somehow knowing that Georgie was in a rush and consequently taking its sweet time. And looking directly into her eyes, it sunk its very long very sharp claws into her other hand. She maintained eye contact with the bugger as it managed to leave claw wounds about a centimeter deep in her hand, neither of them flinching. Grumpy, grumpy old man, he was.

So that’s the deal with koalas.

Most of the koalas Georgie rescues are unhealthy in one manner or another – which is often why they need rescuing. So today, as she sits about five meters up this mean looking tree, she expects that it won’t put up too much of a fight.

She rattles the branches. It starts to move down the tree, at which point Kelly & I spring into action. But it’s a false alarm, as the koala simply moves to an adjacent branch and climbs back up higher. Georgie herself leaps to an adjacent branch, and attempts to capture it with a net on a telescopic pole and one leg wrapped around a branch for stability. Only the koala is up to her game and leaps to another tree entirely.

This koala, as it so happens, is pretty healthy, and doesn’t want to be caught.

Now quite aggravated, the koala starts vocalizing its frustration. Demonic sounds start to come from high up this eucalyptus tree. Sounds that can’t be reproduced. Disturbing sounds of exorcism. A possessed grumpy old man burping and farting and snorting the way only the devil itself could.

Once back on the ground, Georgie sizes up the next tree which she’s determined to climb. “At least this one will be a little easier,” she says as she eyes the lowest branch, almost two meters off the ground. I would have thrown up my hands long before this point, and am suitably impressed with her Amazon tree-climbing prowess.

Once again about five meters (or more) up this tree, she attempts to wield the net to get the little demon still uttering its inexplicable sounds that nightmares are made of. It continues to climb higher up the tree.

“Poor little guy. You are really upset now, aren’t you,” Georgie says lovingly as it replies with a guttural grunt that comes from hell itself. “I wish you’d come down. This is not a good place for you to be,” she continues to coo.

As darkness sets in on us, and we don’t have the torches, ropes, or harnesses that are required to continue on, Georgie reservedly acquiesces. “This is only the fourth time I’ve not been successful in a capture since I started so many years ago,” Georgie observes of her years in wildlife rescue, obviously frustrated. “The real problem is that this little guy isn’t going to last long if we don’t relocate it to a better place to live.”

So although we don’t get a chance to get up close and personal with the koala, we get a good look at it up the tree, and of course, we get more than an earful.

Oh yes. And the crème de la crème: koalas have terrific little defense mechanisms in case they are being chased up a tree. They urinate all over their followers.

Georgie by this point has nonchalantly shed two layers of clothing that are covered in urine, like she does it every day. (Actually, in a way she does. She has been spit at by llamas, kicked at by horses, bitten by donkeys, clawed by koalas, scratched by possums – the list goes on. She’s quite used to the abuse by now, and understands these outbreaks as the animals’ way of communicating). But Kelly, dear Kelly, on this fateful day, has learned a valuable lesson about koala rescuing: 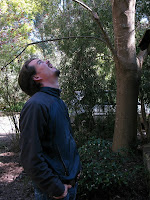 When standing underneath a koala that is in a tree being rescued, don’t look up…with your mouth open.

Very strong mouthwash is now on our grocery list.

5 thoughts on “On The Rescue: Koalas Up Trees”