A Week-In-The-Life of Tiva in South Africa 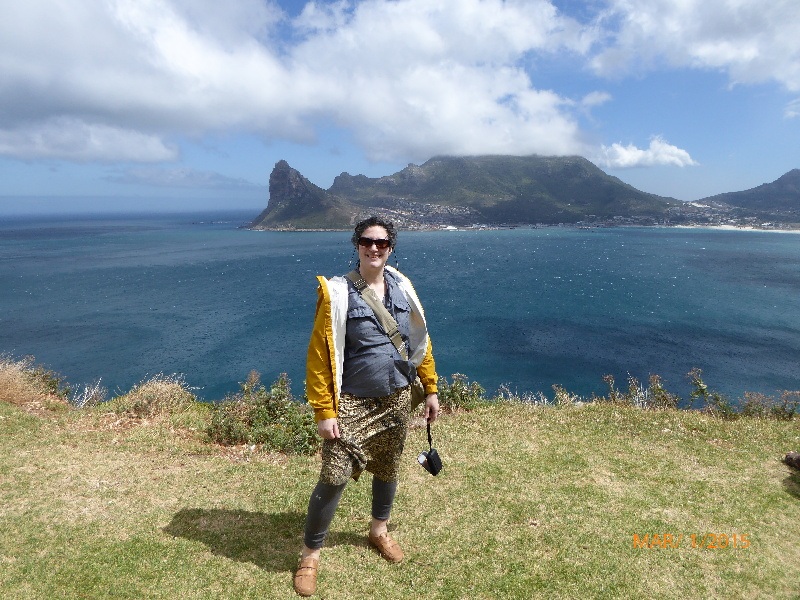 Tiva is traveling to celebrate mid-life. She’s American, but ever since she found out that many Europeans and Australians take a gap year, she wanted to have one. About 20 years later, she sold her house and took one. Tiva tends to seek out travel experiences that focus on traditional cultures and/or really good food. Here’s a week-in-the-life of Tiva in South Africa!

6:30am – Wake up with the sun at a B&B in Port Elizabeth, South Africa. I could use some alone time, so I sneak out to the living room with a book, thinking of a comfy armchair that I saw there. My hosts are awake and promptly deluge me with friendliness and hospitality, “Would you like coffee? Hot or cold milk with that? Fruit? Toast? Eggs now or when your friend wakes up?”

8:00am – I’m traveling with a friend. She emerges and gets the same routine. A wonderful and very filling breakfast, but we’re both slightly overwhelmed.

10:00am – Our guide arrives to take us on a tour of the townships near Port Elizabeth. These are the areas that Black Africans had to move to under the Apartheid system. Nowadays, the Townships are vibrant and complex. There’s still extreme poverty there, but there’s also a growing middle class who choose to stay. Our guide is part of this Township middle class, so it’s a very informative tour, but we’re just scratching the surface in three hours, really.

1:30pm – We ask the guide to drop us off at an African art store in downtown Port Elizabeth, instead of back at our B&B. We’ve been traveling in Southern Africa about three weeks now and have some idea what sorts of things we like and what we’re willing to pay for them. We both get some great stuff.

4:30pm – It’s culture day! The same guide picks us up again to go meet with some storytellers in the Townships. We talk to a woman who was a maid during the Apartheid era about what that was like. Then we go to have dinner with a woman who was in the African National Congress (ANC) during the Apartheid era. She was jailed three times during the ‘70s and ‘80s because the South African police thought she might have information about what others in the resistance struggle were up to. “Poverty tourism” like this is kind of controversial – but we both end up feeling really glad we did it. We’re giving money to a Xhosa-owned business and we’re getting a more well-rounded view of both the past & present of this country than we’d have otherwise.

8:00pm – Our guide is surprised that his boss said we could pay with credit cards. We’re surprised that he can’t process them at this hour and wants cash. A brief moment of tension, but a stop at an ATM on the way home sorts everything out.

8:30am – Go get a rental car bright and early, so we can drive to Addo Elephant National Park, about two hours east of Port Elizabeth. We’ve been nervous about driving on the left side of the road, but everything goes very smoothly.

10:30am – Drop our stuff at our backpackers in Addo town and head for the park. A completely amazing day for elephant sitings. We watch a whole herd take a mud-bath in the early afternoon, and then see the same herd washing off in a cleaner pond in the late afternoon. We also get to see the young males do some play-fighting a couple of times.

6:00pm – We had hoped to explore restaurant options in the town more, but it’s getting dark, we’re a bit worn out from hitting the road early, so we just eat at the place next to our hostel – which turns out to be a truly fantastic organic place where we have a really enjoyable chat with one of the owners.

7:45pm – Sort some stuff with our hostel owner. Our banks communicated poorly when I made the wire transfer to hold our reservation, but now that we’re talking face to face we figure it all out pretty quickly.
See also: Financial Planning for Travelers

8:20am – We go on a canoe trip on Sunday River, near the park. It’s a beautiful, lazy river and we really like our guide, Chen. A terrific half-day.

2:00pm – We transfer to a different guide for a braii (barbecue) and a game viewing drive in the park. Nice, but not quite as awesome as the morning paddle or our drive the day before. Those two things set the bar pretty high, though.

7pm – We liked that restaurant next door so much, we simply go back to it. This time a solo traveler has asked if he could join us. I will be traveling on my own soon, and need all the “kindness to solo travelers” karma I can get, so it falls mainly to me to try and draw him out. I do a so-so job of it, but the food is great!

4:30am – Time to hit the road! We have to return our rental car to Port Elizabeth bright and early, then go catch a hop-on, hop-off bus to our next destination: Knysna. I have the ability to make myself wide awake even without coffee when I really need to, so the drive goes fine.

6:30am – As we’re waiting for our backpacker bus, we chat with a woman who’s 68 and doing a round-the-world trip for the third time in her life. She has packed much lighter than either of us and we’re sort of in awe of her. Would love to chat more, but unfortunately she’s headed the other way.

12:45pm – Arrive in Knysna. The big treat I gave myself for my birthday is my very own room! My friend and I are both quite used to living alone, so I chose a cheap hostel and paid for two separate rooms for us. We enjoy spreading out our stuff and just kicking back for a bit, then grab a late lunch down at the waterfront. When we planned the trip, my friend was going to buy me a birthday dinner tonight, but she’s beginning to realize the 4am start to our day might kill that plan – she pays for lunch instead.

7:00pm – Sure enough, my friend is dead to the world… I’m still wide awake because of whatever I did to make myself awake for the drive in the morning. Someday I’ll have to learn how to undo that effect. I go on Facebook in search of some sympathy for my lonely birthday, and I get some, but only from the insomniacs. For most of my friends back home it’s the middle of the night. Also, you don’t get a whole lot of sympathy when you’re on vacation – not even on your birthday.

6:30am – The hostel offers some breakfast foods, but it’s tough to get a turn at the stove, or at the one indoor communal table, for that matter. I give up and retreat to my room with coffee. My lovely, solo room where I can kick back with coffee and a book, so it’s not half-bad really.

10am – We both had light breakfasts at the hostel, so down to the waterfront for a brunch. Knysna’s waterfront is attractive and pleasant, but there’s a “could be any upscale resort town anywhere” feeling to it. Still, good food and a nice seat by the canal puts us in a pretty good mood.

11am – A long, pretty walk along the waterfront to an underwhelming African art market. But actually I get one of my most-used items here: a little leather bookmark shaped & painted to look like a giraffe.

2pm – We go on a guided hike, using a guide the front desk recommends. It’s a truly stunning hike from an overlook down to a rocky coast, but the scramble back up to the overlook is very, very steep. We’re torn between happy and frustrated because the guide said he’d listen to what we wanted (flat or hilly) and he really didn’t listen at all.

7:30pm – We find a fancy-ish place to have my belated birthday dinner. It includes a brownie with ice cream & hazelnuts. I feel much better now.

5:30am – One of the front-desk staff (owners?) is on the couch just outside my room, watching sports on the telly and hacking out a lung (just a smoker’s cough he probably doesn’t even notice anymore) so I wake up.

7:30am – My friend and I have a nice breakfast at the waterfront, but also a minor quarrel. We’ve been traveling together a month by now and this was our only quarrel, so we’re doing pretty well.

11:45am – We still have separate rooms, so that gives us some time and space to cool off. We take one last stroll around Knysna and resolve the quarrel.

1:30pm – Catch the backpacker bus to Cape Town, which is where we started our trip a month ago, and where my friend’s flight back to her life will head out in a few days. It’s a 10 hour journey thanks to all the stops, but we pass the time with a Scrabble app and new-to-us snacks like chutney flavored corn puffs.

9:30am – We catch a cab to Table Mountain, but decide not to take the cable car up it, after all. The line is too long. It’s Easter break, so a lot of Capetonians pour out of the city, but people from all over pour in.

10:00am – We find a hop-on, hop-off city tour bus that stops right where we are. The whole route only takes 20 minutes or so, so we decide to hop-on, see all the stops, and choose one or two that’ll be our activities for the day. We end up with a really nice stroll on Camps Bay Beach followed by some mid-afternoon cocktails.

6:30pm – On our way back to the hostel when my friend spots a huge carousel near the Victoria and Alfred waterfront and remarks that she loves carousels. We decide to hop off and do the carousel. This is not at all like the carousels of our youth: it feels too safe, too high-tech, they’re stopping and starting it to let other people on too much. We have a great time making fun of it and then go home.

8:00pm – Trying and trying to pay my credit card bill online, but the internet just keeps timing out on the site I need. (This problem would not be resolved until about a week later…)

At the writing of this post, Tiva was staying at an off-grid lodge in South Africa with little web connectivity, which makes it hard to plan your next travel move! But she has her sights set on either Ireland or Iceland. Find out the latest on her blog Tiva’s Travel Tales.