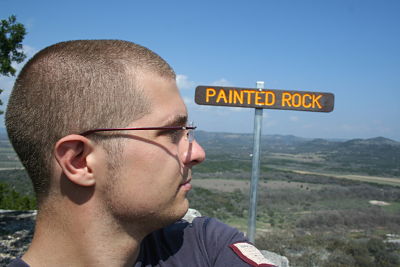 Ryan McCoy lived as a full time van-dweller for 6 months in early 2012. Being relatively young and incredibly broke, he ate mostly at McDonald’s and Wal-Mart, showered in workout complexes, slept on an air mattress in the back of his 1992 Previa, and generally cut costs at every turn. His travels took him to rural Mississippi, New Orleans, Texas, all the SW states, and eventually Yellowstone National Park–where he is working this summer. Please enjoy this week-in-the-life of Ryan as he carves out a routine living in his van, starting in Houston!

This post was originally published in 2012 . It has since been updated for accuracy of links and content.

6 AM: Wake up. The tinting on the van doesn’t really work, so I pretty much wake up with the sun. And the sun is rather stubborn about punctuality.

That is ok though, because I love Mondays; while everyone is busy working away I get to have the freedom to explore every nook and cranny of this wide world in relative peace. Kind of like being Ferris Bueller indefinitely.

8 AM: A dilemma. Breakfast places are overpriced, and all the buffets and lunch deals do not open till 11. Every morning I tell myself I can make it until then, but eventually cave and make a horrible decision like buying a pint of Wal-Mart ice cream and pigging out.

9:45-10 AM: Wait outside the library before it opens like a shark circling a meal. I am one of the most bookish travelers you will meet. While I love going out and exploring, having my nose in some type of research is where I am meant to be.

4 PM: Leave the library (and internet) kind of like the way a vampire leaves his coffin for the first time in 300 years: bewildered, confused, and afraid of the sun.

9 PM: Drive around for a while trying to find a new parking spot. It is good practice, when staying longer than a couple days in a city, to find a rotation of solid 24-hour stores to crash at. I cannot find a 24-hour store tonight, and still being relatively naive at this stage of the trip, I cannot think of any problems coming up.

1:45 AM: Problems come up. Since my sleeping location was not 24-hours (and that I drank gratuitous amounts of water today), I must drive around a foreign town at ungodly hours of the night looking for a place to use the restroom. On the verge of tears, I bolt into a Shell station only to find a huge sign on the door that says “see cashier for key, customers only.” Thankfully, the cashier already has come up behind me with the key in hand. It’s times like this that I love people.

6 AM: Despite the wants of my sleep cycle, the sun still exists.

2 PM: Excited about all the city locations I scouted out yesterday at the library, me and the van set out for downtown.

2:30-Seemingly Infinity: Drive around looking for an affordable parking space, curse, drive some more, curse even more. Eventually decide to go find a fast food place in the suburbs and just bike into downtown.

3PM: Park (illegally?) at Burger King. Make sure nobody is looking and try to get the bike out of the back as inconspicuously as possible. There’s no graceful way to take a bike out of a mini-van, and since my bike does a great impersonation of an alligator not wanting out of its cage, I will be lucky not to have the restaurant have my van towed.

3:30 PM: Hang on for dear life as I ride the bike on roads with no shoulders.

4:30-7 PM: Bum around downtown Houston and do the sightseeing thing (hopefully riding back before dark!). This part is great because for a glorious moment of time, there is no difference between me and the rest of the travelers and sightseers.

6 AM: The sun is particularly rude this morning.

11 AM: Get directions to San Antonio from Houston. I remember thinking before I left for this trip “Sure the GPS is a year old..but how much can a city change in a year?” Every freeway in Houston can, apparently. I quickly discover there is no surer way to make locals hate you than by driving horribly in their city.

3 PM: Get into San Antonio. Time to find all the essentials: A Gold’s Gym (for showers), a Library, a McDonald’s, a Wal-Mart and a Laundromat. San Antonio is very van-dwelling friendly, as most suburbs have all of these things right next to each other in the same strip mall.

6 PM: Tired and not knowing what to do in a new city, I might as well eat (“Might as well eat” is a phrase solo travelers use a lot). I don’t mean experiencing the local cuisine, I mean stopping by the best deal out there for people on the road: CiCi’s Pizza. The place is a broke traveler’s fantasy: $5 for all the marginally edible pizza you can dream of–which in my case, is a lot.

8 PM: Actually get a good night of sleep thanks to the grease-induced food coma.

3 PM: Go on a bike ride through downtown San Antonio. I am not very good at finding bike paths, so I usually just end up riding around suburbs and consider myself lucky for the exercise.

7 PM: Park the van close enough to a Starbucks so that I can get internet. Go in and buy a coffee because I feel bad and do not want to mooch, I just really like the privacy of working in the van. Perform about a million checks to make sure nobody is watching me, and dive back into the bed of the van. And now I have it: Glorious, private internet time.

8 PM: Somebody parks right next to me. My windows are not very tinted…I know they see me. They know they see me, and they know I see them seeing me. Neither of us really know how to act and just kind of pretend the glass actually is tinted.

2:45 AM: Knock Knock Knock A friendly greeting from the San Antonio Police Department. Despite what many would have you believe, the large majority of police in the United States are generally understanding folks―including this particular officer. After he realizes that there are no dead bodies in the van, he opens up. I tell him I run a blog and end up talking about the dynamics of San Antonio for a good 30 minutes. This is another one of those times on the road that makes me love people.

6 PM: The library closes early…but I still want to get some work done on the site and watch an NHL game. Not one to be outwitted, I head to McDonald’s (the only place nearby that has wifi) and prepare my setup like a bear getting ready to hibernate for winter.

10:30 PM: Still at Micky D’s. The looks have gone from suspicion to pity. At least my hometown hockey team is winning.

12 NOON: You know the phrase “case of the Mondays”? Well, I have a case of the weekends. All the attractions are crowded, all the streets are jammed, and the libraries either aren’t open or close early.

4 PM: Go to Gold’s Gym to take a shower. Normal courtesy is to get in and out as soon as possible…no doubt people are unsure what to think as I am in there for a good half hour singing and dancing my little heart out. (When access to showers is scarce, the urge to sing is even greater.)

1 PM: Sundays are even worse. Not only is everything packed, but it’s packed with families having a great time. I miss my mom’s cooking, football parties at friends’ apartments, and having someone to spend time with among the crowd.

3 PM: I struggle for ways to pass the time. I like to sit down and remind myself to be thankful for the opportunities I have. There are some nags and unpleasantries listed in this post, but what makes it all worth it is being able to experience the variety of the world (whether it be a book, a mountain range, or meeting a new person) with a free and clear mind.

6 PM: Find a parking lot somewhere and crawl into the back; hopefully I can use this time to get some work done on my site.

Ryan McCoy finishes up his job as part of the office staff of Yellowstone in September. From there he will head to Seattle, Oregon, the northern reaches of Canada, and eventually he will revisit the life left behind in St.Louis, MO. There may be a small stay in San Francisco, if his girlfriend has her way. Which she always does.

No matter where is, you can undoubtedly find Ryan McCoy on the internet looking something up for his site Travel and Graphs.

5 thoughts on “A Week-In-The-Life of Ryan McCoy: Van-Dwelling in the USA”