A Week-In-The-Life of Leif: The Runaway Guide 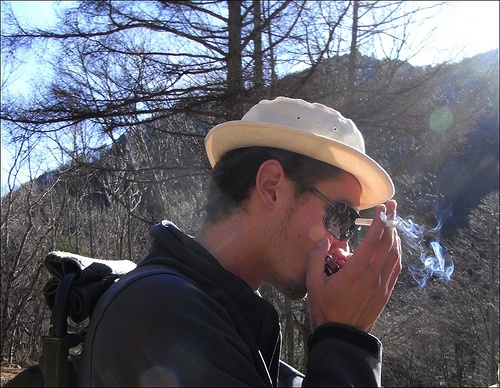 When Leif (creator of The Runaway Guide) was 16, he ran away from home and explored much of Europe and the Middle East without a penny to his name. He’s most recently undertaken intense budget excursions to India, Eastern Europe, Nepal, Thailand and Japan. While living and studying at the United Nations University in Tokyo, Leif was affected by the recent earthquake. Read on for this intense week-in-the-life of Leif Harum (of The Runaway Guide), in Tokyo during the earthquake in Japan.

This post was originally published in 2011. It has since been updated for accuracy of links.

2:00 PM There were partly cloudy skies surrounding a crisp air on the afternoon of Friday March 11th. I had just awoken from a dreamless sleep. Habitually, I flipped open my laptop and began checking my e-mail. My girlfriend was online and we started chatting. Everything was tranquil. There was no indication that this day was going to be anything but ordinary.

2:46 PM Suddenly, like a scene from “The Exorcist”, the room and everything in it came to life.

2:47 PM The earthquake reached its climax about a minute after it began. Now, not only was the room alive but it was on a rage-filled binge of vodka and speed.  Books, bottles, and dishes came crashing to the floor. The entire building undulated like a huge ship in high seas. I believed death would soon follow.

2:48 PM The quake subsided enough for me to stand and I immediately sprinted to the stairwell. When I finally reached the ground, I dropped to the concrete. Confused and exhausted, I tried to comprehend what had just happened.

3:00 PM A fire raged in an adjacent building. Ambulances and helicopters cried out around me as the earth had done. Large aftershocks continued and tsunami fears heightened.

6:00 PM We were allowed to return to our rooms. Aftershocks continued throughout the night at 15 minute intervals.

9:00 AM I awoke after a restless sleep and checked the news. Images of the devastating tsunami shocked me.

12:00 PM My fears increased as I heard of the explosion at the Fukushima Nuclear power plant and evacuation orders for residents in close proximity.

1:00 PM My parents contacted me and asked me to leave Tokyo. I couldn’t decide what I should do. I wanted to go and help in the relief effort.

2:00 PM Another large aftershock provoked intense anxiety within me. I decided to drink some wine. “Maybe I should leave,” I thought to myself.

3:00 PM The world appeared eerie and dangerous but also tranquil and new. Either way, I was tired of living on the edge. I decided I would travel to the earthquake and radiation-free land of Kimchi (Korea).

12:00 PM I boarded the Shinkansen (Bullet Train) towards Fukuoka, a 5-hour ride.

1:00 PM Everyone’s cell phones rang out. It was an alert from the government. They warned us another earthquake was approaching. Silent anxiety descended over the train.

1:05 PM Thankfully, the train had not been affected by the quake and we were not thrown from the tracks at 150mph as my imagination had envisioned.

2:00 PM We received yet another earthquake alert text from the government. Everyone held their breath in anticipation. Fortunately, I think by that time, we were far enough away.

5:00 PM I arrived in Fukuoka.  I was more than a little relieved. It was raining so I found a cheap hotel near the station.

7:00 PM Although I knew there was no threat of an earthquake, I kept imagining that the room was shaking. Paranoid and tired, I drank some tea and fell asleep.

9:00 AM I awoke, showered, and checked out of the hotel. I found the bus that would take me to the port and climbed on board. There, I met a Korean heading home. He looked as I must have, weary and worn out.

10:00 AM My new Korean friend and I arrived at the port and bought tickets for 12 o’clock ferry.

1:00 PM The ride across the strait was beautiful and super fast. It was a high-speed hydrofoil ferry. We glided over 6 foot waves as if we were floating on a cloud. I imagined the Mongol invasion of Japan in the 12th century and later the Japanese invasion of Korea in the 16th century. The time passed quickly.

3:00 PM The ferry approached the Korean mainland. I could see the port city of Busan, the city where my grandmother was born. I was overcome with wanderlust at the sight of a new country to explore.

4:00 PM It was bitterly cold and so instead of hitting the street, I decided to splurge on a nice hotel for the night.

5:00 PM I no longer felt as though the room was shaking. I snacked on some Korean street food while marveling at a view of the port. Tired but excited for my Korean adventure to begin, I drifted off to sleep.

11:00 AM I checked out of the hotel and wandered the streets of Busan. I bought some strange street food I had never seen before. It was similar to a corndog but it was covered in french fries. It was a fantastic lunch.

1:00 PM I headed to a café across from the train station while I waited for my girlfriend to arrive.

2:00 PM Aided by my cup of coffee, I wrote emails to my relatives at home to let them know I had made it to Korea safely.

4:00 PM I headed over to the station and played harmonica to pass the time. The locals stared at me in curiosity. I wasn’t bothered by it much and continued with my jam.

5:00 PM There was no sign of my girlfriend and so I decided to return to the coffee shop. I was surprised when I found her standing on line to order. She spotted me first, ran over to me and we embraced.

6:00 PM Over another cup of coffee, I recounted the story of my trip and the earthquake to her. She was happy I had made it safely.

12:00 PM My girlfriend took me to Haedongyonggunsa (no, I didn’t just sneeze) temple. Perched along the coast and filled with giant golden pigs, it was one of the most beautiful temples I had ever seen.

1:00 PM I threw a coin from a bridge into a lucky statue 10 meters away. Everyone around cheered for my good fortune. I felt lucky to be alive and thriving in such a picturesque and holy place.

4:00 PM We headed to the fish market for dinner. There was an amazing variety of live fresh fish. We chose a flounder, 4 shrimp, 2 oysters and 10 muscles. It was a delicious feast.

6:00 PM Stuffed with fish, we returned to our condo satisfied.

12:00 PM We woke up late again. Fears of earthquakes and radiation were far from my mind.

2:00 PM We made our way to a local street market. My girlfriend introduced me to some bizarre but delicious delicacies.

3:00 PM I discovered that Koreans really do eat dog!

4:00 PM We decided not to eat dog but get some fast food from Lotteria (Korea’s McDonalds) instead.

6:00 PM Back at our condo, I realized that I had made the right decision. Korea was awesome so far and I couldn’t wait to see what Seoul would be like.

Leif is currently floating between California and New York, with possible plans to head to Sudan shortly. On Leif’s blog, The Runaway Guide, he recounts his past tales and current adventures. He provides practical yet often unorthodox budget guides from Jumping Trains and hopping borders to sleeping the street and finding cheap flights. His primary hope is to prepare, inspire and empower others to realize their own travel dreams and adventures.

1 thought on “A Week-In-The-Life of Leif: The Runaway Guide”