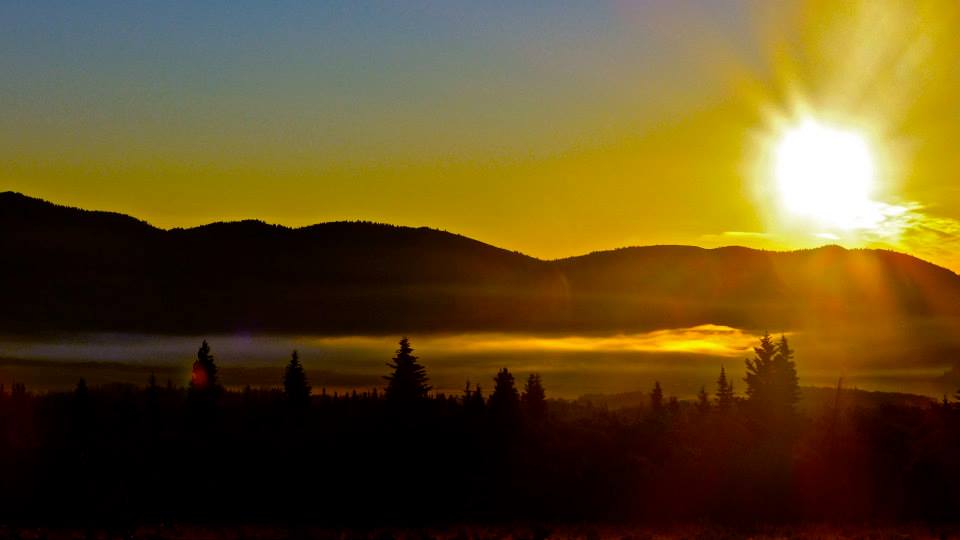 For the last year, Ndrika has extracted herself from the television production rat race in London to live in Canada. She loves big cities and shopping for a bargain, but nature also calls. Thus, she spent two months swapping the city lights of Toronto for the starry nights of Alberta in the Rocky Mountains, while working on an animal sanctuary called Heaven’s Gate. Here’s a week-in-the-life of Ndrika in…heaven!

See also: How to volunteer around the world and get free accommodation

4.30am – I have somehow been convinced to forgo sleep to climb the Rocky Mountains with four people I am living and working with on Heaven’s Gate animal sanctuary. We have to get up this early because apparently the sunrise is unbelievable, though it can’t be any more unbelievable than the fact I’m awake.

5.30am – So the sunrise is a big deal and well worth being torn away from my bed. I can’t stop taking pictures. I have never been and will never be a hiker but I like a good walk in the fresh air and you only live once.

9.30am – Grass is a distant memory. During our steep ascent we were able to grab on to the stems of plants to prevent gravity doing its job but even those have disappeared and all that remains are rocks and loose rocks.

One girl is in tears and demands we call a helicopter, as even though I keep a positive demur at three points during our trip, I am certain one or all of us are sure to die.

All you can do is laugh when you find out that the man who is our appointed leader has never hiked before and is in fact a novice with no map!

We can see Heaven’s Gate in the distance and I think that I may never again eat another nutella sandwich!

11am – After being no more than 100 metres from the top, we have begun to descend. Isa and I master the ‘bumable’ technique, which is when it is no longer safe to walk, so you sit on your bum and slide down inch by inch. Our trousers and bums will never be the same. After a few more risky falls and jumps, more tears and minor panic attacks, it becomes clear that we will all survive, so long as we don’t see a grizzly bear.

12pm -We reach a trodden path, where there are signs of life. We are so happy it’s hilarious.

2pm – I eat three Nutella sandwiches once back at Heaven’s Gate.

8.30am – I wake up to the sound of gentle horse neighs and pig oinks in the girls’ cabin, which I share with three others. We start work at 9am, give special food to some of the skinnier horses, whilst the others (there’s 19 altogether) are free to roam the 1km property and eat any grass they come across.

We have no running water, which I have quickly become accustomed to. In fact I have only had two showers since I arrived a month ago. Don’t judge me because we all stink together, so to each other, we don’t stink at all.

12pm – After our entertaining ordeal yesterday the owner of the sanctuary (Brigitte) takes us on a girls’ day out. Driving in Alberta is always beautiful.

People in Alberta are friendly and we get the full extent of this in a western horse shop, where four different people talk to us in 30 minutes just because we’re there.

4pm – We head to Roy’s Restaurant but decide to leave after ordering water because we see a cheap Chinese buffet across the road. Well tell the server we are meeting our friend there but when we cross the road we see that the Buffet is closed, proceed to head back to Roy’s “as our friend’s not there”. When you travel for a long time, you lose all sense of shame and finding a bargain is the top priority.

10am – I am working with a girl called Steffi helping build a roof. She is from Hamburg in Germany and demands on being called Bauer, which means farmer. She had a very stressful job back home and would be happy to shovel shit all day. Sometimes you need to get away and breathe and travelling is great for that.

It is about 34 degrees and the heat from the roof burns our bums. We can’t stop laughing at the situation. We both used to work in offices and never would have guessed a year ago that we would be roofing in Canada, burning our bums.

4pm – Before I even arrived in Canada I knew I had to go to the Calgary Stampede and experience my first rodeo. I thought I might be able to get complimentary tickets because of the blog and the videos I make, so I contacted Tourism Alberta a few weeks ago. The stampede finishes this weekend so it’s now or never. I hope everything works out, as the rodeo is already sold out online, so everyone’s depending on me…No pressure then.

9am – After saddling up the horses, we wait for Gordon, the local neighbourhood cowboy. He gives true meaning to the phrase ‘Jack of all trades’. He arrives late, but in Alberta, you basically arrive when you arrive and as long as you get there, that’s good enough.

11am – Before Canada, I had only done English riding, so riding Western was a complete shock but today I finally feel like I’m getting it. Horse riding in the Rocky Mountains is like nothing I’ve experienced before; after every turn and over every hill there’s a new postcard moment.

1pm – After riding for a solid four hours my bum is starting to ache. We see bear prints and I realise we are in the wild, the real wild. I ask Gordon what is the procedure if we see a bear and he simply says ‘hold on’.

5pm – After the ride, we are all exhausted but content. I head straight for the wifi to check if I have any new emails about my visa application, as I would love to stay in Canada another year. It’s a weird situation waiting for someone to decide your future but you just have to go with the flow and all I can do is cross my fingers.

I Skype my boyfriend, who is Irish but lives in Toronto. We talk for almost two hours. I miss him so much but Skype is literally one of the best inventions ever and makes travelling and being apart a lot easier.

7pm – Today we cook on the bonfire near the tipis. It’s great fun because we are all travellers and have lots of stories and lots of the animals always invite themselves for dinner.

12pm – Brigitte begins to train the horses, the majority of which are from troubled homes and no longer trust humans. She plays soothing music whilst training and with the backdrop of the Rocky Mountains, I’d say there’s no better place to be healed whether you’re a horse or a human.

6pm – Today it’s my turn to make dinner. I actually love cooking but cooking for 8-10 people is a whole different skill; finding enough pots and plates is a job in itself. I don’t think I’ve eaten much healthier in my life than in the last six weeks, apart from the Nutella sandwiches of course.

Today for dinner I risk making roast potatoes. I say risk because it means using the oven and as the sanctuary works on renewable energy and a generator the power goes off quite often. We once baked a cake, which we put in the oven at Thursday noon and it was ready by Friday evening.

9pm – Whilst on my Canadian travels I am constantly filming and editing travel videos for my blog. I edit until the power goes off at around 10.30pm.

12.30pm – After I’ve eaten, I quickly head to use the internet and hope to God that a miracle has occurred and I have somehow managed to get tickets to the sold out Rodeo for tomorrow and for some wonderful reason, I have.

Thanks to Tourism Alberta, all five of us will be heading to Calgary tomorrow to get our Canadian Cowboy fix.

6pm – I head to the wifi to check for news about my Canadian visa. Still nothing. I also begin looking for jobs, since in two weeks I’ll be heading back to live in Toronto.

10pm – We all watch Die Hard on VHS in the cabin. There’s nothing like a bit of Bruce before bed time.

6.30am – I actually have a shower in preparation for the Stampede and a shower for me these days is a big deal. I even put make up on and attempt to make my hair acceptable for normal civilization.

8am – Nothing beats driving in Alberta. The long open roads, no traffic and green fields all around with countless hay bales is beautiful, then simply add the mountains and you can understand why we often have to stop for pictures.

12pm – We drive straight to the Stampede park and I immediately start filming. I pretend to the others that I ordered the tickets for the wrong day and their faces are priceless.

3pm – After lots of shopping for cowboy hats, cowboy boots and generally anything cowboy related, we head to the rodeo. Everyone and their dog are wearing cowboy hats, paired with flannel shirts and all the girls are in hotpants. I didn’t get the memo but next year I will come fully prepared.

As our tickets are scanned on entry to the rodeo, it finally dawns on me that a dream of mine was coming true. The rodeo is unbelievable, especially for someone who rides horses. I can’t understand physically how these guys manage to stay on the right side of the horse for longer than a blink of an eye.

6pm – I get lots of interviews from some really friendly Calgarians and foreigners alike. We head for something to eat and then go to the free concert to see Walk Off the Earth perform.

10pm – Before we leave we wait to see the closing fireworks ceremony, which are fantastic. In that moment being around my friends, watching fireworks in Canada makes me realise I wouldn’t want to be anywhere else right now. Right now I am not worried about the future and my visa and the unknown. I am simply enjoying life and I have never enjoyed life more than when I am travelling.

Check out my Calgary Stampede video:

Good news: Ndrika got another Canadian visa (she’s hoping for permanent residency eventually), and is living in Toronto, making videos on the Toronto film festival and fashion week, and taking trips to places like Quebec. The flushing toilets and running water are nice, but she misses waking up to the sound of animals and looking out the window to the Rocky Mountains.