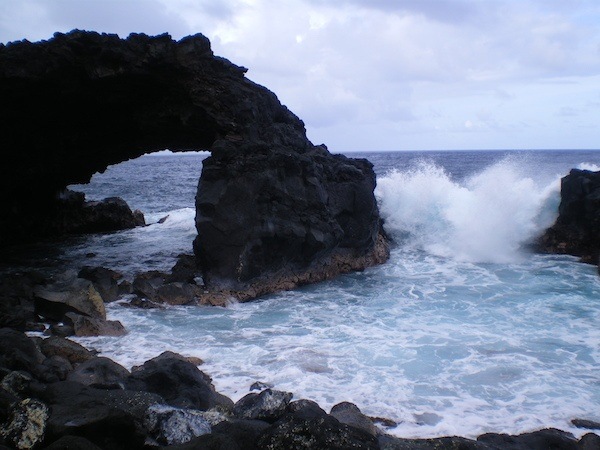 Adventures at Orrs Beach on the Big Island of Hawaii: This post was originally published in 2007 and has since been updated. Please enjoy this story for what it is, and read the note at the end for an updated view. For some more recent content and travel adventures, please check out the latest posts on my blog!

What constitutes “adventure”, really? Is an adventure fun at the time? When you’re in the thick of it, do you see it as an adventure? Or….torture?

I wonder if adventures are really just awful and unpredictable experiences, which, when the ordeals are over with and alcohol has been consumed to dull the ache, are viewed as adventures by virtue of sheer survival.

Recently, I found new limitations in life. Not human limitations through endurance or physical or mental duress; personal limitations. The princess in me is not dead yet.

I discovered that there are few things in life I enjoy LESS than walking a bicycle through ankle-deep mud, getting eaten alive by bugs, and not being able to get any purchase on the firmer terrain for all the slippery mud oozing around my sandals.

The feeling of mud squishing in between my toes, and the sight of thick layers of it underneath my toe nails, is not something I care to repeat.

Such was not what our “adventure” was supposed to look like at the outset.

We had heard from numerous locals and long-time residents that Orr’s Beach is a little undiscovered discovered piece of heaven. Some actually refer to it as the “sweet spot”.

It is a little section of black sand beach (although swimming at it is seriously discouraged and supremely dangerous) with rocky tidal pools, some beautiful surprises, and an epic trail in. We were told that on the right day it can make for some great fishing, snorkelling, and general exploring. And because it is off the beaten path, it’s considered a truly hidden gem by the few people who know about it.

“Look for the sign that says Kapu – No Trespassing, and go on in,” said one of our sources. Such is the way around much of the Puna district; politely disregard the No Trespassing sign and enter at your own peril.

Kapu is actually a sacred burial ground, and the sign not only said No Trespassing, but indicated some sort of law that could be enforced if wanderers were caught. But since so many people (including Hawaiians) have told us of Orrs beach, and since all oceanfront property is actually public land, we decided to respectfully give it a shot.

We were also told not to stray off the trail, as there are many lava tubes, some of which are actual burial sites of Hawaiian ancestors.

Although intriguing, happening upon a long-dead Hawaiian guy in a crusted tube of lava wasn’t on our list of things to do for the day, so we decided to heed that advice.

Unfortunately, the short downpour that occurred just before we were on the road didn’t help the next stretch of our adventure. The trail head is a small road (navigable by I don’t know what sort of small all-wheel drive car) surrounded by huge mango trees. As the path continued, the dense growth all around us became increasingly thicker, and the sun shining through the heavy vines and roots that formed our tunnel was quite dramatic.

Too bad though, that I couldn’t enjoy the scenery too much on the way in, since I was so busy looking down. When the road wasn’t completely flooded over, there was enough mud to create an “adventurous” hike in, especially for two travelers out for an innocent bike ride with no expectations or warnings of difficult terrain.

It got worse when we made the mistake of occasionally stopping to take some pictures and video, and the bugs descended upon us. And once they were on to us, we could run as fast as we liked – they stuck. And followed. And stuck some more.

As we trudged ever-deeper into this strangely beautiful abyss, all we could do was reassure ourselves that the prize at the end of the “road” was well worth the adventure of getting there.

And Orrs Beach was certainly a beautiful sight to behold. It featured much of the sharp rocky lava we see on our front porch, except the cliffs were only about 10 feet above the water, and there were numerous tidal pools that looked more like aquariums than natural features. With a little scrambling, we were able to catch a glimpse of the dramatic lava/coral arch that loomed 40 feet in the air, with the surf pounding both through and on either side of it.

But it wasn’t exactly the “sweet spot” we had been led to believe, possibly because we have our own “sweet spot” right off our front step which many people don’t have at their fingertips. Insult was added to injury when we looked off to our right, and saw our place! It was so close that by traversing and scrambling on the rocky coastline, we could have reached the same spot in less than half an hour from our place – no mud. No bugs. No dirty bicycles, and no squishy sandals.

However, now, with a few home-made margaritas under my belt to numb the pain of the event, I can call the experience an adventure. We forged through unknown territory in search of a prize, and although we don’t entirely feel the prize was worth the journey, it was a journey nonetheless.

I can look down at my 50+ bug bites on my legs (no exaggeration), my scratches and bruises from the underbrush, and my cruddy toe nails and laugh – because I am a warrior. I endured. I am tough chick; hear me roar.

But really, the princess in me just wants a nice clean adventure next time. Is that possible, do you suppose?

Nora’s Note 2019: This post was originally published in 2007. Many years (and countries!) after this event, I would like to suggest that No Trespassing means No Trespassing – especially when the land is considered sacred to locals. Since writing this article, I have seen tourists around the world go against indigenous and local resident signage – be they signs relating to sacred worship or even safety – in search of the almighty selfie or “off the beaten path” experience. In recent years some prominent “travel influencers” have even died because they strayed off the trail.

Out of respect for the local culture and environment, please obey the rules.