A Curious Bubble in Boulder, Colorado 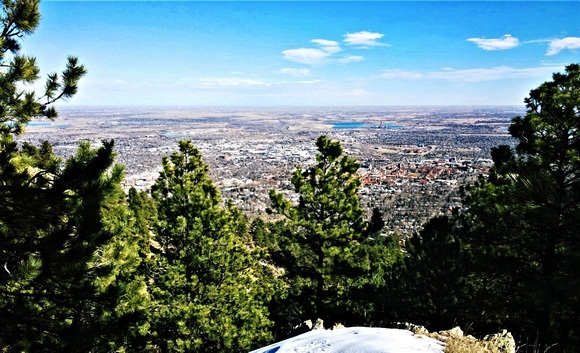 “I’m dying to know…how are you going to write about Boulder?” asked fellow traveler Jason Moore (of Zero to Travel) who I met up with and who calls this little Colorado hot-spot home.

Although I didn’t actually see “The Boulder Bubble” when driving in from Denver airport, after a few weeks of staying in Boulder, I felt it. Also referred to as “10 square miles surrounded by reality”, Boulder was an interesting experience – and one I’ve had some trouble formulating an opinion on.

Boulder begs to be poked fun at in many ways, and yet a tongue-in-cheek approach doesn’t quite do it justice. Nor does a glowing (nor scathing) review.

On this thoroughly ambiguous note, here are my observations of Boulder Colorado:

This post was originally published in 20015. It has since been updated for accuracy of links and content.

Boulder is About the Outdoors

The mountain-lover in me fell in love with the scenery and access to all things outdoors-y in Boulder. It sits right at the foothills of the Rocky Mountains, and without even leaving the city limits you can get your hands on rock with rampant trails and climbing routes suited for novice and expert hikers, runners, and climbers alike.

There are also options if you don’t want to get vertical; it was the first city to tax itself for funds dedicated solely to the acquisition and preservation of open space; thus every neighbourhood has a great network of parks, paths, and green space.

The Flatirons dominate many vistas of Boulder, with climbing routes that have not only been traditionally climbed, but also climbed without ropes, naked, with roller skates, high-heels, pets, and a variety of other confusing incantations. Why, you might ask? Well, why not – a Boulderite might say.

With the University of Colorado in town, you’d naturally expect a fun-loving youthful quirky approach to things. But it’s not just students climbing those Flatirons in skates; Boulder in general boasts a unique approach to fun.

Frozen Dead Guy Days is a perfect (and far from a standalone) example; Boulderites flock annually to nearby Nederland to attend themed parties around – yep, you guessed it – a frozen dead guy, who was cryogenically preserved by his grandson in 1989. Some of the events you can attend include coffin races, a parade of hearses, and more.

Further proof of Boulder’s quirkiness: Mork and Mindy was filmed there, and it’s considered a badge of honour.

I’m sure this quirky ambiance has something to do with the fact that Boulder is part of the largest beer-producing triangle in the world, with microbreweries at every turn.

It’s nice to have something in your stomach to soak up all that beer. In 2010, Bon Appetite magazine named Boulder “America’s Foodiest Town”. There is a massive concentration of restaurants in Boulder, many with a farm-to-table approach and organic ingredients.

The Whole Foods Centre of the Universe

Speaking of organic food, Boulder has multiple Whole Foods grocery stores, including the galaxy’s largest Whole Foods store – affectionately referred to as “Whole Paycheck”. I got lost in it, before finally finding the cash registers and confirming the “whole paycheck” nickname.

You’d think with all this beer and good food that Boulderites would be obese for it; quite the opposite. In fact I believe the calorie count in Boulder needs to be thus in order to support so many (ridiculously) active lifestyles.

Boulder tops all the lists for well-being, most active city, bike-friendly city, adventure town, and more. It was rated “#1 Sports Town in America” by Outside Magazine, and more people walk to work per capita in Boulder than anywhere else in the US.

Boulder also celebrates all things bicycle; in the winter, the bicycle paths get ploughed before the streets do; the total bicycle count is more than one per person. In the summer, every Thursday night hundreds of people participate in the “Thursday Cruzers” event, riding their cruiser bikes around town and shouting “Happy Thursday” to bemused onlookers.

Boulder’s proximity to the Rocky Mountains make it the perfect outdoor playground for those who are active at heart. Drive half and hour and you’re on your own in nature, surrounded by deafening silence. Another half an hour and you’re in ski country, lots of ski resorts to choose from.

I Feel Fat in Boulder

All this fitness makes me feel fat here (and I’m pretty far from being overweight or unfit). Everybody is in top shape; they run (like, marathons), bicycle (like, triathlons), do yoga (like, with a higher concentration of the most perfect downward dogs than I’ve ever seen), and more.

Named “skinniest city in America” by Gallup in 2012, Boulder is just a sample of what you can find in Colorado in general; a 1992 survey by the Centers for Disease Control found that Colorado had fewer overweight people per capita and more people who exercise than any other state.

Function is Valued Over Fashion

If it looks like everybody is dressed like they just came from the gym or off the trail, it’s because they did. I saw more spandex on the streets in three weeks of staying in Boulder than I have in the rest of my life put together.

I had heard (but was unable to substantiate with some sort of statistic) that Boulderites are among the worst-dressed populations. But it’s more like a different kind of fashion; although you’ll see a lot of spandex and active-wear in Boulder, you can bet that a lot of it came from some speciality brand-name designer shop. They may not be runway-worthy fashion statements, but they’re fashion statements nonetheless.

“Spandex is timeless,” said one Boulderite in defence of this observation; need I say more?

…and a lot of it. (People have to pay for all that fancy spandex somehow). It’s touted as one of the most expensive cities in America to live in; as evidenced by the high concentration of restaurants, brand name (active-wear) stores, and a booming real estate market.

The Other/Under Side of Boulder

The above facts about Boulder Colorado are largely positive. It’s a happy-healthy-educated-active-prosperous place. What could be wrong?

Well, nothing, in a sense. Boulder rocks (as long as you fit the bill). But if you don’t fit this profile, Boulder might be a bit overwhelming. Topping so many of the “best this” and “most active that” lists, it’s an extreme place, full of extreme people. I heard comments like “it’s hard to live in a place where everybody is so fit, so successful, and so rich”. It seems that just being mediocre isn’t in the cards.

“To live in Boulder, you have to be driven, successful in business, AND an extreme athlete,” said a woman who lived in Boulder for many years and became somewhat disillusioned by it after surviving cancer and a few life changes that stopped her in her tracks. Suddenly she didn’t fit the profile and felt alienated by her own home town.

Like many North American cities, Boulder is a busy place; want to go for coffee with a friend? Better schedule it a few weeks in advance. And if you’re hoping for a deep soul connection with your coffee date, you might need to schedule that one at least a month out.

I saw a spiritual side to Boulder, but as with many things spiritual, it begged the question how much of it is spirituality versus being fashionably spiritual. Throw a stone and you’re likely to hit a yoga studio – full of fit tight-bodied perfectly-clad people executing every pose to (and perhaps beyond) perfection. Next door you’re likely to find a health food store, organic restaurant, or trendy coffee shop, where you’ll overhear somebody talking about their 10-step method to enlightenment. And don’t forget to get your dog some specialty gluten-free dog food before you go home.

People in Boulder almost seem “too” good at everything. It’s intimidating.

But then again maybe it’s just me. The majority of the people I met in Boulder were pretty awesome, well-traveled, and engaging folks. Colorado in general is a beautiful state, and seems to attract an eclectic nature-loving active populous. As with many cities, Boulder is a bit hectic for my taste, and living there in a financially sustainable way would require some serious income.

But you can’t complain (too much) with 300 days of sunshine per year. Or if you did complain, nobody would hear you; they’re all off hiking/skiing/biking/paddling/running somewhere.

36 thoughts on “A Curious Bubble in Boulder, Colorado”